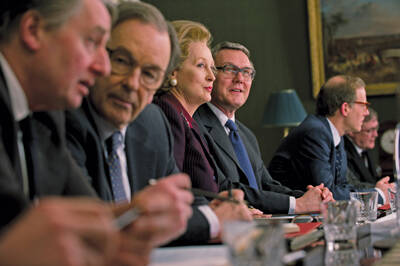 If you buy a ticket to The Iron Lady to be enthralled by Meryl Streep’s performance as Margaret Thatcher, you will not be disappointed. Streep looks and sounds as much like the aged, dementia-fogged, former prime minister as she does the middle-aged, perfectly groomed and self-possessed politician who rose through the Conservative Party ranks to win its highest post. She has the acuity, the diction, even the various gaits to be convincing as Mrs. Thatcher over three decades or more. Streep shows once again why she has won more Oscar nominations than any other actor.

To appreciate fully this film’s distinctiveness, however, one must look elsewhere—at its unexpected point of view. For although this is partly a biographical film about a world leader—with historical facts, archival footage and epochal decisions—it is first the story of a woman. The film’s director, Phyllida Lloyd, and the screenwriter, Abi Morgan, depict their subject’s life in personal terms, rather than focusing squarely on Mrs. Thatcher’s 11-year tenure as leader of the United Kingdom and the woman who danced with Ronald Reagan (literally and figuratively) on the world stage. A real life, after all, is not merely a series of world-class achievements; it is shaped by early happenstance, like one’s parents, gender, birth order, social class and hometown, as well as by opportunities, hardships, decisions, relationships and the times.

Margaret Roberts (played with just the right mix of innocence and steel by Alexandra Roach) was a small-town grocer’s daughter who imbibed her father’s political views and Methodist values, including hard work and principled self-reliance. Her adult incarnation of those virtues, especially the latter, explains why she could make tough, unpopular decisions as a political leader and why she was eventually dubbed by the Russians “the iron lady.” All her life she was, by choice, a “doer.” She gained admission to Oxford, ran for political office three times after her graduation and eventually won, worked as a chemist and became a tax lawyer (both positions are unmentioned in the film), a member of Parliament, and secretary of state for education and science under Edward Heath.

The filmmakers’ story begins in the present-day, with Margaret Thatcher living in England, and unfolds through a series of flashbacks. Events seem to invade the memory of the Baroness Thatcher as they once shattered the peace of the moment in which they took place. A close colleague is suddenly killed in his car by a bomb placed by the I.R.A. (Report-edly, Mrs. Thatcher was not actually present, as shown in the film, but the point is well taken: the sudden murder affected her personally.) Striking miners protest in the streets of northern England and, in a different strike scene, disgusted Londoners dump their uncollected garbage in front of 10 Downing Street. Without warning, Argentina’s military invades the Falkland Islands. In most of these cases, it is clear from Mrs. Thatcher’s speeches and actions where she is coming from and what she hopes to accomplish, but the events have a staccato quality that recalls real life and is nearly as disorienting.

A few close relationships provide the solid ground upon which events break. While Prime Minister Thatcher wielded more raw power than any other woman (and most men) in modern times, she is also a wife who, in the film, depends on the love and moral support of her husband, Denis. Mr. Thatcher (played as a strong, equal mate by Jim Broadbent, a true Denis look-alike) infuses the film with humor, a vital role that saves us from drowning in seriousness. Perhaps he played a similar role in the real Mrs. Thatcher’s life. Denis’s living presence to the aging Margaret in the film, though in reality he died years earlier, shows not only the measure of her dementia but of his continuing importance to her. History may forget him, but the director and writer have attempted an inside job, a life seen from their subject’s own vantage.

This approach has limits, however. What are we to make, for instance, of Thatcher’s retort to Alexander Haig, the U.S. secretary of state, who had come to negotiate the Falklands war? She compares the Argentine invasion of the islands to the Japanese assault on Pearl Harbor. It is a great laugh line. But if it is historical, there seems to be no record of it. Yet on this matter, Mrs. Thatcher did in fact ask President Reagan over the transatlantic hotline, What would you do if Alaska were invaded? It is possible that the fictional line was built on that. To discover the historical Thatcher, though, one should read history books.

Still, the insider approach can be revealing. Take the Thatcher twins: Carol (Olivia Colman), who as an adult regularly cares for her aged mother, and Mark, who calls her from his home in South Africa but never sets a foot onscreen. It is his company Margaret misses; her daughter’s she blindly takes for granted. Yet these maternal relationships were long on Mrs. Thatcher’s mind and pulled at her heart, as when she left her youngsters to drive off to the office or as a mother decided to send young British soldiers off to war; and decades after she has left politics they still tear at her. How much of this is fiction? That is unclear. But by combining the Baroness’s real roles of wife, mother and leader, the film’s portrait of her does what many purported “lives of great men” fail to do—namely, show the person in context, in the quotidian.

This broadening of scope, however, leads to a sort of diminishment of the person. As long as a leader’s family life is kept in the background, deemed unimportant compared with the public work, a leader can loom larger than life. Adding the human touches turns even the greatest leaders back into mere mortals. As depicted in “The Iron Lady,” Margaret Thatcher was for decades an influential leader, yet she was also a woman affected by childhood taunts, strengthened by a helpful spouse and reduced in her last decades by physical impairment. That realistic view could provide a better basis for spiritual reflection on the meaning of life, and the stages of life, than a handful of films about hyped-up “great men of the world.”