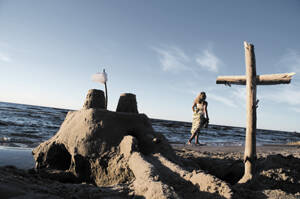 While attending Catholic grade school and high school in Philadelphia, my sister, Joan, was an ardent, practicing Catholic. Then she started to slip away from the church. I urged her to come back with John the Baptist’s words, “One more powerful than I is to come after me.” She would sometimes embrace those words and attend Mass and go to confession. But not often. Now Joan, at 45 years of age, was dying of pancreatic cancer.

When she was a little girl, maybe 9 or 10, our family used to go to the beach in Wildwood, a working-class family resort tucked into the southern end of New Jersey. She would build sandcastles and say, “I’m going to live in a castle some day.” She wanted to become a princess. At 12, I just smiled.

Years later on an autumn day, Joan pulled away from her row house in Philadelphia in a beat-up Chevy Impala on her way to Los Angeles. She was an original hybrid: a Philly row-house girl with L.A. style. She never came back. The dream she harbored while building sandcastles on the beach in Wildwood came true. She married well and wealthy; her husband, an interior designer, bought her a magnificent house—a castle, really, with a pool designed by the Walt Disney Corporation. The house sat on the highest point of Beverly Hills, overlooking the City of Angels. She settled in with what seemed to be a lasting smile on her face.

And why not? She lived in a castle; she was rich; she was beautiful in an L.A. kind of way—often mistaken for the actress Natalie Wood. Once, when my wife and I traveled to the island of Maui in Hawaii, we dined with Joan and her husband in a high-end restaurant where the tables laced the edge of an indoor pond inhabited by live flamingos. Suddenly, three of the hot-pink birds strode through the water, ignoring all the other elegant, bejeweled women seated around us and stopped at our table to stare at her.

Joan’s inner beauty, though, far exceeded her outer beauty. She was an enormous giver, an enormous sharer, selfless. That trip was her gift to my wife and me: a week in Maui in a room overlooking the ocean, a room where maids turned down the bed and left a poem and an orchid on the pillow each evening.

Once, when she returned to Philadelphia for a visit, I picked her up at the airport in a car that was falling apart. “You need a new car,” she said. I told her I could not afford one. Several weeks later, after she had returned to Beverly Hills, she called to say, “I’m going to buy you a new car. Go pick one out.” Of course, I didn’t.

Her largess did not extend to me alone. She showered gifts and money and love on everyone—parents, sisters, brothers, nieces, nephews, aunts, uncles, friends, even people she did not know well. Oh, the glow she could put on you!

Still, I sensed that she was not completely happy. Being away from the church seemed to be eating at her insides like termites. I knew she firmly believed that “once a Catholic, always a Catholic.” When we visited the Santa Monica beach, she would build a sand church that resembled the parish church in our old home neighborhood.

Then, on a cold, slate-gray day, my telephone rang. The conversation was brief. Joan had died. It was not as if I was unprepared. For months, the cancer in her pancreas had spread to other vital organs; her weight had dropped to 80 pounds; her eyes had sunk into her face and her voice had fallen to a whisper. Even so, I slammed down the phone, angry and confused. I wanted to place God on a witness stand to explain her death, yet I knew he had his reasons. I went on a seven-mile run to shake things out. During the run, tears filled my eyes, yet those tears did not blur my memories of her goodness. At one point I looked to the sky and envisioned Joan’s face peering down on me, smiling and putting a glow on me.

As death approached, she experienced a range of emotions: anger, denial, fear, confusion, love, peace. The peace came when she called for a priest. A Jesuit from a parish she visited on her occasional trip to Mass or confession came to her bedside and administered the sacrament of the sick.

Afterward, with a surge of energy, she said to him, “You had garlic for lunch.” Caught off guard, the tall, distinguished Jesuit instinctively covered his mouth, “Oh, I’m sorry; yes, for lunch.” She smiled at him and whispered, “You’re cute.” The 70-year-old Jesuit blushed. “Nobody has told me that in 50 years,” he said. Then he heard her confession and gave her Communion. Not long after that she shut her eyes for the long sleep, but not before pinning her hopes on seeing the light of God’s eyes.

At the funeral Mass I knew my face was a rumpled mess, as if I had tossed and turned in memories of her all night. That day the sun shone in blinding brilliance; it reminded me that the goodness of her life will be felt amid her sudden, blinding absence. The eulogies at Mass were a perfect scrapbook of stories filled with rays of her human sunshine. I locked my eyes on the casket framed by 200 red roses, and these words from a poem I had recently written came to mind:

who sought no private end

who lost no friend:

If there is a path to be taken,

take it where the prize

of His life will reside,

as the light of His eyes.

does time need to be conferred

to this earthly world,

but to a more

In his homily, the Jesuit, in his baritone voice, addressed the gathering: “Be comforted, my friends. When I saw Joan for the last time, she had a glow around her that I hadn’t seen on anyone in a long time.”

B. G. Kelley is the author of The World I Feel, a book of poetry.

Show Comments (
2
)
Comments are automatically closed two weeks after an article's initial publication. See our comments policy for more.
10 years 2 months ago
This is a beautiful tribute to a loving sister whose death brought many memories of her gentle, giving nature.  She lived in a "castle" as she'd hope when a young child and shared her presence.  Thanks also for the thoughtful poem dedicated to her.

Anna M. Seidler
Craig McKee
10 years 2 months ago
Which was the greater SACRAMENTAL moment here?
When the Jesuit anointed her with oil or when she told him he was cute?
WHO ministered to WHOM?