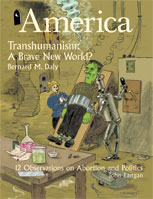 If science and technology are left totally free, mankind can achieve an enhanced, transhuman future, rid of all pain and even free of death except by choice. At least that was the view of some 150 scientists, philosophers and engineers at the recent TransVision 2004 conference at the University of Toronto. The conference did not target only the U.S. Christian right for opposing such things as stem cell research. It challenged every faith community that believes a human being is more than just one more biological product. The weekend of Aug. 7 was organized by the World Transhumanist Association. In 2005 its conference will be in Caracas, Venezuela, where this small band of transhumanists will continue to challenge all larger faith communities to review what they have to say about a brave new world that would carry us far beyond the engineered manipulations that seemed so distant when Aldous Huxley wrote in 1932 about creating babies in test tubes.

The six-year-old W.T.A. has nearly 3,000 members, two-thirds of them in the United States. Most are male engineers, philosophers and research scientists. Co-sponsors of the Toronto conference included a number of similar organizations that exist mainly as stylish Web sites mounted by small groups with names like Betterhumans, Extrophy Institute and Immortality Institute.

For Nick Bostrom, co-founder of W.T.A. and an Oxford University philosopher, transhumanism is a new paradigm for thinking about humankind’s future that rejects the assumption that human nature cannot be changed. Transhumanists, who include computer scientists, neuroscientists, nanotechnologists and researchers working at the forefront of technological development, believe that we can and should try to overcome all our biological limitations by means of reason, science and technology. They seek complete freedom to use new technology to augment intelligence, increase human strength and beauty, bring about sustainable mood enhancements, prolong life greatly and make it possible to leave the earth and explore and inhabit space.

David Pearce, who joined Bostrom in founding the W.T.A., predicted in an article published in 1977, The Hedonistic Imperative, that with genetic engineering and nanotechnology our post-human successors will rewrite the vertebrate genome, redesign the global ecosystem, and abolish suffering throughout the living world.

Perhaps because the transhumanist message is disseminated mostly over the Internet, and perhaps also because of the W.T.A.’s call for total freedom in scientific exploration and technical engineering, many of the nonmember participants in the Toronto weekend were university students preparing for high-tech careers. The conference made the faith views of the transhumanists easily accessible to these students.

The Toronto conference had just ended when it was announced on Aug. 11 that a Newcastle University team had been given a license in Britain to clone human embryos for therapeutic research purposes. The following weekend, Lux Research, a consulting company that studies nanotechnology, reported that corporations, governments, universities and others will spend an estimated $8.6 billion (U.S.) on such research and development in 2004, more than double the estimated $3-billion level of 2003. (Nanotechnology is used to build products out of components whose size is less than 100 nanometers, usually designer molecules. A nanometer is one billionth of a meter; the word is derived from the Greek root nano, which means dwarf.) The vision of the late physicist Richard Feynman, who proposed in 1959 that molecular manufacturing processes would make possible digital control of the structure of matter, is now becoming a reality in laboratories.

Because foreseeable innovations might enhance human life beyond all present constraints of disease or aging, there should be no limits whatever on new technologies, according to the self-styled transhumanists, who describe themselves mainly as avowed atheists with a libertarian bent.

The Toronto conference was their latest collective effort to win public support for their viewpoint. They talked about the creation of entities with greater than present-day human intelligence. One session looked at quantum miracles and immortality, another at a kinematic cellular automata approach to building self-replicating nanomachines. One of the few women W.T.A. members talked about posthuman prototypes debating their own design.

There was some questioning and debate amid their optimistic reports. There was both scornful criticism and tentative support of the U.S. president’s Council on Bioethics and its cautionary stance. Questions arising directly from religion fared less well. Christian resistance to some new techniques was characterized at one point as a Luddite dragging in of Trojan horses.

Yet, as a sign of some openness for dialogue, the Toronto conference began with a day described as a conversation between religion and transhumanism. This was a sequel to a similar workshop in July on a post-human-future, organized by the Ian Ramsey Centre, part of the theology faculty at the University of Oxford. In Toronto, however, many religious families were not represented, and those who did present some Buddhist and Christian reflections were also paid-up transhumanist members.

Tihamer Toth-Fejel, a research engineer with General Dynamics, identified himself as a Catholic. He noted without comment from any other conference participant that transhumanism is somewhat a product of secular humanism, which blindly rejects God, dehumanizes us into animals, claims that no objective statements can be made about morality (except the one just made), and ignores that we are intrinsically valuable because we are made in the image and likeness of God.

In The National Catholic Bioethics Quarterly (summer 2004), Toth-Fejel wrote that nanotechnology is only a tool and can be used for good or evil; the problem is that some significant opportunities made possible by precise molecular manipulationespecially within our own bodiesmay seem good but will actually be harmful to our humanity as persons. Enhancements that degrade our humanity are not good for us, because they contradict who we are as persons and, therefore, should be prohibited and discouraged. Our difficulty is in recognizing which enhancements are degrading us, discovering how this degradation occurs and, finally, finding the strength to resist the alluring promises they make.

Other questions about the limits of transhumanism arose during a presentation of work being done by the McLuhan Program in Culture and Technology at the University of Toronto. Steve Mann, a pioneer in developing wearable computers to aid vision, stressed that his main interest was not to enhance human functions but to explore how technology mediates between people and the world around them. Robert Logan recalled Marshall McLuhan’s law that each technical medium enhances some human function but also causes obsolescence, replicates and reverses into its opposite. As an example, computers enhance information handling, replace typewriters, replicate libraries and bring on information overload. The ambiguity of new technologies can be seen in the recent report by Britain’s Environment Agency that Prozac, widely used as an antidepressant, is building up in the country’s river systems and groundwater used for drinking supplies.

There are many questions to discuss, therefore, with W.T.A. members. The views expressed by James Hughes, W.T.A.’s executive director, suggest the difficulties involved in joining them in a dialogue that engages their own faith. Hughes, now a Buddhist, says that new medical technology should be governed only by the principles of liberal democracy: equality, liberty and solidarity. People have the right to control their own bodies, he contends, and efforts by government to control such things as euthanasia or gene manipulation are throwbacks to the authoritarianism of the church and totalitarian states...to dogma and fear.

For Hughes, the human embryo is not a person. It is a biological product, so we must think we can use it for good ends. Engineering genes is like using any other technology, and the precautionary principleDon’t do anything until you understand the long-term consequencesis Luddite.’ We are a society that learns. Physical safety is the only ground he would accept for limiting technology. He is sure, he said in a public debate in Toronto last year, that in about 400 years there will be people with green skin and four eyes who are devout Roman Catholics.

Hughes and others do not think of their transhumanism as a religion, but they maintain their faith in their worldview with religious zeal. For Catholics, therefore, dialogue with them could amount to the kind of interfaith dialogue that Pope John Paul II discussed in Article 68 of Pastores Gregis, his summary of the 2001 synod on the mission of bishops. Such dialogue, the pope said, belongs to the new evangelization, especially in these times when people belonging to different religions are increasingly living together in the same areas, in the same cities and their daily workplaces.

Therefore, one challenge of the new evangelization, especially for Catholic lay scientists and engineers, is to enter interfaith dialogue with transhumanists and like-minded people, perhaps especially over the Internet, searching for those seeds of the Word which lie hidden among them, rejecting nothing that is true and holy in what they have to say.

The second challenge is to clarify what to bring to this dialogue. Catholic scientists and engineers, the Second Vatican Council taught, are among those whose first and special vocation is to seek the kingdom of God by engaging in temporal affairs, like nanotechnology, and directing these developments according to God’s will. Is it God’s will that everything that can be done should be done?

Near the end of Brave New World, Aldous Huxley put today’s transhumanist argument in the mouth of Mustapha Mond, the authoritative state representative. Industrial civilization, Mond says, is only possible when there’s no self-denial. Self-indulgence up to the very limits imposed by hygiene and economics. Otherwise the wheels stop turning. The challenge, then, is to develop counterarguments in favor of a human civilization with self-denial, with limits, with constraints. For that, there is an inescapable first question: What does it really mean to be human?

Bernard M. Daly has had a long career in journalism, including coverage of all four sessions of the Second Vatican Council for Canadian media. He also served from 1993 to 1997 as editor/publisher of The Catholic Register in Toronto, where he now lives.