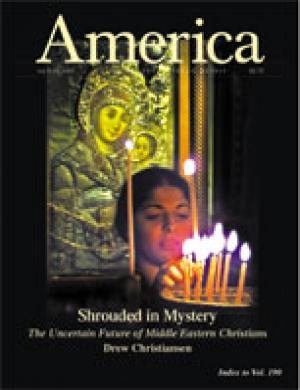 After the terrorist attacks in the United States on Sept. 11, 2001, Southwest Airlines was the only airline that made a profit, kept all its workers on the job and actually adhered to its full flight schedule. The next year, while other airlines cut thousands of jobs, Southwest hired thousands and f

The Perils of Freedom
Jens SoeringJuly 05, 2004

When I saw Joe again, my first thought was: I want to kill him! Slowly if possible, though quickly would do in a pinch. Just so long as I could tell him why he had to die before he breathed his last.Joe had come back to prison, and to old-timers like me that was the worst crime imaginable. Back in t

In a Presidential election year that has evoked controversy about trade, it is especially tempting to cast the opinions about the issues into pro-free trade versus anti-free trade molds. But that dichotomy obscures the real issues and muddles public discussion and decision-making.A little-noticed po

In response to criticisms of the mistreatment of Palestinian Christians in Israel and the Israeli-controlled Palestinian Territories, I am often asked, “Don’t Christians also suffer persecution at the hands of Muslims in the Arab Middle East?” There is no simple answer.Yes, the Uni

My grandmother did not pass on to the afterlife without leaving me something. After a life that spanned nearly a century, three generations were on hand to send her off to her Maker. Her funeral was simple and heartfelt, if a bit unorganized. The priest asked my aunt, just before the procession bega

Your article Celebrating Good Liturgy, by Nathan D. Mitchell, (5/10) reminded me of a Mass I attended in Costa Rica years ago. During the Mass a barefoot man played My Old Kentucky Home on his violin. I thought it was a strange selection for a Mass.

Editorials
Smuggling and Trafficking
The EditorsJuly 05, 2004

Smuggling and trafficking in human beings is on the rise, and with that rise has come an increase in victims’ suffering. Throughout the world, they are treated simply as commodities, often in ways that are physically and psychologically brutal. Although there are differences between smuggling