A Conservation Ethic For the Oceans

My grandfather was a fisherman and loved the oceans. He used to say to me, Protect the oceans and they will protect you. He understood the cycle of life and the fragile relationship between our oceans and all of us. Todaybecause we have largely taken our oceans for granted and failed to protect them through good stewardshipthe oceans’ once vibrant cycle of life is in danger of collapse, and the rich and unique life that they sustain could be lost forever.

Our oceans are in trouble. As much as we love the oceans, and given how much we care about them, it is our responsibility to recognize the clear evidence of crisis threatening our oceans. Unless we pay attention to them, they could affect our quality of life.

Our oceans are this nation’s greatest natural resource. From Maine to Guam, from the Gulf of Mexico to the Gulf of Alaska, U.S. oceans span over 4.5 million square miles, 20 percent more area than our land. Ours is the largest ocean domain in the world.

The oceans make life on earth possible and enjoyable. In the United States, over half of us live along the coast. Millions more come to the oceans each year to swim, sail, surf or scuba dive. Fishing is our oldest industry, and recreational fishing is one of our favorite pastimes. The oceans regulate our climate and provide much of the air we breathe and the food we eat. They offer cures for diseases. President John F. Kennedy once said our oceans are the salt in our blood. They are part of the American spirit from sea to shining sea. They are a source of inspiration, beauty, wonder and enjoyment.

Despite our obvious dependence on the oceans, we are squandering this incredible resource through our neglect and mismanagement. For centuries we have treated the oceans’ bounty as limitless and immune to our capacity to deplete. We have treated wetlands as wastelands and rivers and streams as conduits for our pollution. We live along the ocean’s edge, yet fail to appreciate how our decisions on land influence the health of the seas.

It has been more than 30 years since this nation reviewed the laws and policies in place to protect the oceans. The time has come to bring U.S. ocean management into the 21st century.

Overwhelming evidence indicates that our oceans are in crisis and that today’s ocean management is failing.

Scientists estimate that industrial fishing has depleted the oceans of 90 percent of many species of large marine fish. An increasing number of these species are being driven toward extinction.

We continue to kill as accidental bycatch 25 percent of the world’s total fishing catch, threatening the survival of sea turtles, seabirds and marine mammals, not to mention the fish themselves.

Coastal development and associated sprawl destroy and endanger coastal wetlands and estuaries that serve as nurseries for many valuable fishery species. More than 20,000 acres of these sensitive habitats disappear each year.

Pollution flowing down the Mississippi River leads to a dead zone in the Gulf of Mexico the size of Massachusetts.

Scientists estimate that the equivalent of the Exxon Valdez oil spill10.9 million gallons of oilruns off our streets and driveways every eight months.

An additional 25 million people are expected to live along the coast in the next 15 years, where we are already losing 20,000 acres of wetlands each year.

In addition to these varied threats, climate change over the next century is projected to have a profound effect on coastal and marine ecosystems. The rise of sea level will gradually inundate highly productive coastal wetlands, estuaries and mangrove forests. Coral reefs that harbor exceptional biodiversity will likely experience increased bleaching because of higher water temperatures. Changes in ocean and atmospheric circulation attributable to climate change could adversely affect coastal upwelling and productivity and have significant local, regional and global consequences for the distribution and abundance of living marine resources.

At the heart of the problem is the fact that our activities, both in terms of what we put into the oceans and what we take out, are dramatically altering the oceans’ ecosystems and disrupting a complex web of life.

We all share responsibility as stewards of this great natural resource. As Pope John Paul II has written, There is an order in the universe which must be respected, and...the human person, endowed with the capability of choosing freely, has a grave responsibility to preserve this order for the well-being of future generations. We have an obligation to leave to the next generation oceans teeming with wildlife, a source of sustainable and healthful seafood, with clean beaches and thriving coral reefs. The evidence of our neglect and mismanagement is before us.

John Paul II insists: We face a fundamental question which can be described as both ethical and ecological. How can accelerated development be prevented from turning against man? How can one prevent disasters that destroy the environment and threaten all forms of life, and how can the negative consequences that have already occurred be remedied?

The recently published report America’s Living Oceans, developed by the 18-member bipartisan Pew Oceans Commission after three years of study and consultations, offers a blueprint for responding to the ecological crisis faced by the world’s oceans. It offers practical solutions for reforming ocean management, restoring our fisheries, protecting our coasts and cleaning our waters. It is grounded in science and reflects the views and ideas of people from across the nation.

The fundamental conclusion of the Pew Oceans Commission is that this nation needs to ensure healthy, productive and resilient marine ecosystems for present and future generations. In the long term, economic sustainability depends on ecological sustainability. To achieve and maintain healthy ecosystems requires that we change our perspective and extend an ethic of stewardship and responsibility toward the oceans. Most important, we must treat our oceans as a public trust. The oceans are a vast public domain that is vitally important to our environmental and economic security as a nation. The public has entrusted the government with the stewardship of our oceans, and the government should exercise its authority with a broad sense of responsibility toward all citizens and their long-term interests.

To embrace these reforms and achieve our goal, the commission proposed five priority objectives:

1. Declare a principled, unified national ocean policy based on protecting ecosystem health and requiring sustainable use of ocean resources.

2. Encourage comprehensive and coordinated governance and use of ocean resources at scales appropriate to the problems to be solved.

a. The regional scale of large marine ecosystems is most appropriate for fisheries management and for governance generally.

b. Coastal development and pollution control is most appropriately addressed at the watershed level.

3. Restructure fishery management institutions and reorient fisheries policy to protect and sustain the ecosystems on which our fisheries depend.

In order to work toward the achievement of these priorities, the commission recommends the following: the passage of a National Oceans Protection Act that commits the nation to protecting our oceans; the establishment of an independent Oceans Agency responsible for implementing and enforcing the national commitment; a national coordinating oceans council at the White House that includes all the agencies and departments that have some jurisdiction over our oceans; the establishment of regional ecosystem councils to develop ocean protection plans that bring together the policies of the land and sea affecting our coastal environment; the development of a sustainable fisheries policy, as opposed to the current single-species management; and the establishment of additional ocean reserves to promote the restoration of both fisheries and habitat.

In the midst of this crisis, there are signs of success that should give us hope that ecologically sensitive management of our resources is possible. Striped bass, severely depleted along our Atlantic shores, made a striking comeback when given a chance. North Atlantic swordfish recently did the same in response to lower catch limits and closed nursery areas. Seabirds, kelp beds and fish communities returned to the coastal waters off Los Angeles after waste discharges were reduced. Proven, workable solutions to the crisis in our oceans exist, but such successes will remain the exception rather than the rule until we chart a new course for ocean management.

The world’s greatest natural resource is in trouble.

In their pastoral reflection Renewing the Earth (1992), the U.S. bishops wrote: Grateful for the gift of creation...we invite Catholics and men and women of good will in every walk of life to consider with us the moral issues raised by the environmental crisis.... These are matters of powerful urgency and major consequence. They constitute an exceptional call to conversion. As individuals, as institutions, as a people, we need a change of heart to preserve and protect the planet for our children and for generations yet unborn.

At the turn of the 20th century, Theodore Roosevelt implemented a conservation ethic for our land that lives on today in such revered national parks as Yellowstone, Yosemite and the Grand Canyon. Today Americans need to embrace a new ethic for our oceans that will leave a legacy of healthy oceans for our children. 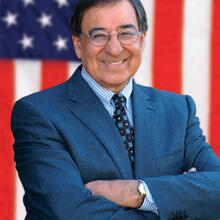 Leon E. PanettaLeon E. Panetta, chair of the Pew Oceans Commission, was a member of the House of Representatives from 1976 to 1993 and White House chief of staff from 1994 to 1997. The commission’s report, America’s Living Oceans, is available
Show Comments ()
Comments are automatically closed two weeks after an article's initial publication. See our comments policy for more.