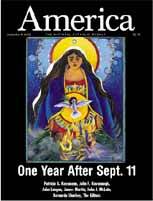 Awailing ululation echoes across the night as I trudge up the sandy hill, the Muslim call to prayer that signals the end of the day. As I crest the hill, I pause to catch my breath. The thin air at this altitude makes any form of physical exertion a daunting task. The wind blows, and a whisper of sand eddies off the top of the hill, whirling out toward the mountains that stand guard over the desert in the bluish haze of the moonlight.

I shift my pack and head into the darkened remnant of a building that serves as my chapel. A small crowd has gathered, and I turn on the electric lantern that illuminates the room. We celebrate Mass together, finding ourselves a tiny Christian minority in this land, our voices mingling in counterpoint to the distant, scratchy loudspeaker’s call. “Our Father, who art in heaven....” After Mass a soldier approaches me and tells me that we probably should not use this facility again. “You’re silhouetted by the light in those windows. I’d hate to see you take a head shot at Mass.” Nodding, I assure him that I wouldn’t be crazy about that myself. How my life has changed in the last year.

One year after Sept. 11, 2001, my life is radically different in ways too numerous to count. As a U.S. Army chaplain assigned to a Special Forces unit, changes were inevitable in the aftermath of that horrific tragedy. That event destabilized my life and the lives of the soldiers I serve. We knew we would go to the fight, but the waiting, the planning and myriad changes in the plans took a toll, just as our national sense of security and certainty were shaken on that September morning. We’re going. We’re not going. We may be going. We’ll definitely go. We’re definitely staying put. Those frequent and sudden changes in where our mission would take us and when it would lead us there seemed endless, and each one added a bit more stress to our lives and the lives of our families.

Another change in my life is getting used to being the infidel. That is how many of the people here in Afghanistan view me and the people I serve. The question was phrased succinctly by a boy who asked, without guile or malice, “Are you a Muslim or an infidel?” Well, if those are the only categories, then I guess I have to choose infidel. And I am working hard at trying not to be the Ugly Infidel. A knee-jerk reaction to Islam helps no one here (or anywhere else) and only confirms the beliefs of the more hardcore fundamentalists. The vast majority of Muslims I have encountered here are wonderful people, deeply saddened and disheartened by what a few fanatics have perpetrated in the name of their religion. So I have had to confront my own stereotypes about Muslims and my own lack of understanding of the nuances of their religion, trying to find common ground and foster understanding where possible.

I have also come face to face with evil during the past year. I can no longer believe completely that evil is banal, when I am confronted by it in the street. Driving through a string of villages, we pass through one that is notoriously unfriendly toward Americans and their allies. The stares from the men in the bazaars and along the street are some of the ugliest and most hostile I’ve ever seen. The tension in the air is palpable. Everyone in the convoy is on edge, half expecting the shot to come that will start a firefight. Evil has a face that is angry and whose eyes are glazed with a burning certainty of its cause, a cause that puts religious ideals and laws ahead of the human beings who are subject to them. “You place heavy burdens upon them and will not lift a finger to help them”—an old evil that we have been warned against, a warning that we have ignored, an evil that now must be confronted.

From the moment I watched on television as that second airliner plunged toward the tower, I have been drawn closer to God and the Gospel that proclaims his Son. I have been forced to seek the face of God in the Gospel for a word that heals, a word that soothes fears and ultimately a word that does justice. Again and again while trying to make sense of the events of Sept. 11, I have had to turn to God and ask what he wants and needs from me and the U.S. soldiers engaged in this struggle. I have found in this place fear, hatred, misunderstanding, anxiety, anger, frustration, hope, beauty, love and a hand that reaches out. My soldiers have carried out combat operations, and we have adopted schools that educate children who a year ago had no hope of any education at all. We have been hugged as we entered one village and spat upon as we left another. And God has accompanied us this whole distance and will accompany us even farther down this road.

As we remember and reflect on this past year, and wonder about what the next year will bring, maybe the biggest change I can find in my own life is that I am now more radically dependent on God for the strength to continue the struggle for justice in the world, and for the knowledge that this struggle begins within.