Disciples and Citizens: Theodore Hesburgh, C.S.C., and Msgr. George Higgins are honored by their country for lifetime service. 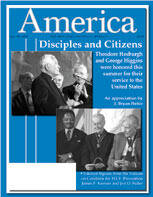 Summer is not a good time to have significant events occur; too often they are missed by those who should know about them and would want to know about them. It is likely, for example, that even dedicated readers of the Catholic press did not see two announcements that should not go unacknowledged.

Two priests, now in the final stages of their life and ministry, who have profoundly influenced both their church and their country, were honored in unique fashion. In July, Theodore Hesburgh, C.S.C., was awarded the Congressional Gold Medal by the U.S. Congress; in August, Msgr. George Higgins was awarded the Presidential Medal of Freedom by President Clinton. The symmetry of both a Republican Congress and a Democratic President recognizing these two men was a fitting tribute, since the two have pursued highly visible public lives without partisanship. Although their ministries were located in different settings—Hesburgh as president of Notre Dame and Higgins at the N.C.C.B./U.S.C.C.—both embody lessons about discipleship, citizenship and priesthood.

Both men exercised their ministry in highly “secular” settings. Theodore Hesburgh’s career was never confined to Catholic higher education alone; he became a uniquely acknowledged voice in American higher education, and he spent virtually a third of his professional life in direct service of the U.S. government, with assignments ranging from the U.S. Civil Rights Commission to a U.N. ambassadorship. George Higgins entered the field of labor relations, following the tradition of Msgr. John A. Ryan and Bishop Hass, and to this day he has not ceased to be a voice, an advocate and an ambassador for working men and women in the U.S. economy. For Hesburgh, sitting on a presidential commission and for Higgins, serving on an arbitration committee were activities as common as liturgical ministry.

But no one in these secular settings ever doubted where these two men were rooted. They were invited or appointed or elected to positions because of their skill in joining moral vision with complex secular topics and choices. But it was always clear that the sources of their admired vision lay deep in the Catholic tradition of the Scriptures and social teaching. Their lives were lived during “the century of Catholic social teaching,” as successive popes sought to relate revelation and reason to the social challenges and tragedies of an often violent century. Hesburgh and Higgins demonstrated by word and deed the capacity of an ancient tradition to address authentically new questions, from nuclear weapons to human rights to civil and economic rights in a multiracial society. Long before there was an authoritatively formulated “option for the poor” in Catholic teaching, Hesburgh’s pioneering work as chairman of the U.S. Civil Rights Commission, holding hearings in the deep South during the most conflicted period of the civil rights struggle in the 1960’s, was a vital catalyst for justice in race relations. And in the 1970’s Higgins was the essential link between the struggles of Cesar Chavez’s United Farm Workers and the support they found in the U.S. Bishops Conference and the American labor movement.

Discipleship is about witness, exemplifying what the essence of Christian life is for all who ask or wonder. While Hesburgh and Higgins always acted in the public arena as priests, their lives, their causes and their arguments were always about the meaning of being faithful to grace and the Gospel for any believer. Before the Synod of Bishops, meeting in Rome in 1971, voiced the conviction that “action on behalf of justice” was a constitutive dimension of Gospel witness, their lives embodied this truth. They were honored this summer, however, as exemplary citizens; neither the Congress nor the presidency has any charism for judging discipleship. But the work of both is dependent upon the quality of citizenship in the land. In a summer awash in political figures invoking their faith and stressing the marriage of religion and politics, Hesburgh and Higgins are a refreshing reminder that maintaining the moral integrity of both religion and politics is a more stringent challenge than composing a campaign or convention speech. Their lives, their causes and their passions are not easily reconciled with the leading edge of what either party platform offers the American public. Citizenship for Hesburgh and Higgins has been about the hard cases of politics: expanding the circle of prosperity to the poor, welcoming immigrants and paying them a living wage, protecting the right to organize and promoting the religious and racial integration of American society, using American power wisely and generously in the world and protecting the right to life along the spectrum of life from conception to death. If they had been given time at both conventions this summer, my guess is their critique would have been more prominent than their commendations.

At the same time, neither of these public priests has been a utopian. They were committed to change, and they were shrewd enough to know that in the public order change often comes by inches, not miles. They set forth very broad goals, but they taught all of us not to disdain limited measures. They had the discipline and wisdom to live with the complexity of public life without being complacent about it.

In the end, as both disciples and citizens they have been remarkable examples of the priesthood. They loved the church—loved it deeply enough to serve it for a lifetime and to criticize it when necessary. As bishops and religious orders struggle today with how to make priestly life a challenging yet inviting choice to a generation of Catholics who have many choices, the example of Hesburgh and Higgins is a rich resource. Their form of work and witness is perhaps not first among the activities Catholics associate with priestly ministry. But it will be a constricted Catholicism that does not have space for the public priesthood embodied in their lives. In my judgment, it presents the church in a fashion many of this generation would find attractive and inspiring.

There is no exact parallel within the church for the civil honors Theodore Hesburgh and George Higgins received this summer. But if someone can think of an appropriately similar recognition, it should be granted to both immediately. This century’s American Catholicism is already deeply in their debt for what they did throughout the last century.

The Rev. J. Bryan Hehir is Professor of the Practice in Religion and Society at the Harvard Divinity School and Center for International Affairs, Cambridge, Mass.

Show Comments (
2
)
Comments are automatically closed two weeks after an article's initial publication. See our comments policy for more.
15 years 6 months ago
Bravo to the Rev. J. Bryan Hehir for the clear, concise and compelling article “Disciples and Citizens” (9/23). It is a wonderful tribute to two men (Hesburgh and Higgins) who give confidence, credibility and relevance to our Catholic clergy and church. what a refreshing balm for all the befuddled confusion surrounding Pope Pius IX.

15 years 6 months ago
Bravo to the Rev. J. Bryan Hehir for the clear, concise and compelling article “Disciples and Citizens” (9/23). It is a wonderful tribute to two men (Hesburgh and Higgins) who give confidence, credibility and relevance to our Catholic clergy and church. what a refreshing balm for all the befuddled confusion surrounding Pope Pius IX.