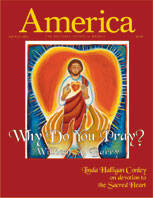 I have a friend who still believes in
heaven.
Not a stupid person, yet with all she
knows, she literally talks to god,
she thinks someone listens there in
heaven.

I hardly remember the day I brought the statue home with me. I remember only its brokenness. My very old friend Tom owned precious little, but he wanted me to have this statue of the Sacred Heart of Jesus. He insisted, in fact, with an urgency he rarely displayed. I knew I must pay attention.

From the first time I brought Tom the Eucharist, I realized that our friendship would probably be brief. Time had left him physically sore, handicapped and blind. I also recognized from the outset that here was a man who carried meaning with him, a why for who he was, that would transport me beyond the extraneous and temporary into the realm of the unknown, where, it is believed, the heart of Jesus welcomes the sore and forlorn, the tired and downtrodden. When I returned home with the statue, its face and arms chipped, its clothes torn, I scratched my head wondering what possible meaning I could gain from it. Why would Tom want me to have something so beaten by time?

How little attention we pay to the broken and the ugly. How willing we are to discard the bruised apple, the child’s outgrown shoe, the fallen statue. Our lives become exercises in distraction, in disposing of what we perceive to be useless, while surrounding us each day are the hurting and the lonely, the old and the disheveled. This I knew. I glance at a beautiful woman tossing her head, walking in confidence, knowing that around the corner sit the afflicted, the torn soul searching for salvation. That person’s beauty is more troublesome.

The Sacred Heart of Jesus. Entrusted to me. Jesus pointing to his adorable heart. All my childhood, above my parents’ bed was that picture of Jesus’ Sacred Heart, emblematic of something profoundly Catholic. But I hardly ever thought about it. Surely I did not think that it might one day restore my sense of hope and trust and love after my father had finally sipped that last drop of alcohol. I did not know then what I know now, after living real years of life. Oh sure, I knew about the miracle from my grade-school religion book. Jesus exposes his Sacred Heart to St. Margaret Mary Alacoque. His finger points to the crown of thorns encircling that heart emanating lovethe inevitable dichotomy of life. He wants her to tell others to remember his heart. To recognize his love for them, for the lonely and the afflicted.

My friend Tom was among the lonely and the afflicted. When I met him, he had no one special person in his life, as many of us do. Not even a single remaining relative to keep him company. But his perfect love of God was the purest I had ever encountered. For that reason, he was never alone. For if it is true, as the great religious thinker Simone Weil writes, that the love of God is pure only when joy and suffering inspire an equal degree of gratitude, then Tom knew this primal love. He could hold the mutilated statue of the Sacred Heart of Jesus and realize that our earthly lives are fragmented bits, a mere foreshadowing of eternal joy, the fullness of God’s love. He couldn’t wait to see the face of Jesus, he would say to me, again and again, during our many long hours of talks. There in that huge beyond, Jesus’ Sacred Heart would have arms unbroken, so unlike the disfigured statue I now saw in front of me. The face of Jesus would be lovely, Tom knew, his facial skin not peeling down an entire side, as the plastered statue in front of me did. And he would stand there as a remarkable testimony to a wholeness no one of us can hope to find while we traverse time.

I met Tom one summer when our pastor had gone away to study canon law. As his replacement eucharistic minister, I was to visit five of his elderly homebound parishioners. On my initial trip, Tom was the last of the five I visited that hot August morning. My love for him was immediatebut disturbing. I left his dilapidated apartment and went home and wept. Sitting at the bottom of my stairs, I wondered how a church of loving members could forget this old man who lived alone, blind and seemingly unaware of his filthy surroundings. His wife of 50 years, I would learn, had died two years earlier. But I would not learn until a year into my visits with him that he had also been a Franciscan priest for 20 years.

He had left his religious order to get married. Back in the 1940’s that act alone was enough to excommunicate him from the Catholic Church. He was a scandalthis man who, though bruised by his peers, would embrace a statue hardly recognizable and urge on me recognition. Here was the old man bent with years, the poet who grasped with a poetic subtlety the hugeness of our hurting and made from it something whole and meaningful and approachable.

We all bruise. We hurt. We slap. We fidget. We complicate the simple. Our hearts break. I break yours, you take mine. We accept this morning’s awakening as if thousands upon thousands will be just like it. But I recognize none too soon that only the heart of Jesus remains constant, steadfast and whole, unmarred by the years Tom had touched it. I have my friend Tom to thank for that lesson. He pointed me toward this story and whispered a prayer. I had only to listen in order to hear.