The Parents' Part in Vocations 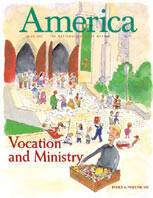 The Most Rev. Thomas V. Daily, bishop of Brooklyn, N.Y., recently wrote a lengthy pastoral letter on the current shortage of priests and the decline in the number of vocations. Under the title, Pray the Lord of the Harvest, the letter was published in the Nov. 11, 2000, issue of The Tablet, Brooklyn’s diocesan weekly.

In its issue of Sunday, Nov. 19, 2000, The New York Times carried a feature story entitled, No Longer Eager to Say, My Son, the Priest.’ In this article, the reporter Laurie Goodstein, having noted Bishop Daily’s letter, went on to conclude from surveys and her own interviews that nowadays even many devout Catholic parents do not encourage their children to consider vocations to the priesthood or religious life.

The Most Rev. Frank J. Rodimer, who has been bishop of Paterson, N.J., since 1978, commented on the Times’s article in the column he regularly writes for The Beacon, the Paterson diocese’s weekly. His essay appeared in the paper’s Nov. 23 issue and is reprinted below in substantially the same form.

In her New York Times article subtitled, Religious Careers Lose Luster for Catholic Parents, Laurie Goodstein noted that Brooklyn Bishop Daily’s pastoral letter on the priest shortage was intended not only for parish administrators, but also for the parents and grandparents sitting in the pews. Catholic leaders like Bishop Daily are well aware that a major factor behind the shortage of priests is a shortage of Catholic parents who are willing to coax their children to consider vocations to the priesthood.

Along with making some good points, Ms. Goodstein approaches the subject from a purely secular perspective. Before going into details about her reasoning, I must say I don’t know of any priests or seminarians who were coaxed by their parents to become priests, nor do I imagine that any parents who tried it would get very far.

It is probably fair to say, however, that fewer Catholic parents in our country today would get excited if their sons expressed a desire to become priests than in days gone by. Even so, according to a CARA (the Center for Applied Research in the Apostolate, located at Georgetown University) survey, one out of three Catholic parents agreed with the statement, I have encouraged my child (or children) to consider becoming a priest, sister or brother. Some might wish more parents felt that way, but to me, at least, that statistic is impressive, even encouraging.

I put the major reasons, again very secular reasons, why parents are said to be negative toward their sons becoming priests, side by side with the religious concepts of the priesthood as a calling, under five categories:

1. Status Symbol versus Service. It is maintained that for children of immigrants a generation or two ago, the priesthood was a high honor, certainly a preferable alternative to a job in the coal mines or steel mills. Parents were proud to say, My son, the priest. I suppose it depends on who you’re talking to, but the priests’ parents I know today are also proud of their sons. So are the parents of seminarians.

However, if the priesthood was ever a status symbol for some, that was never a sufficient motive for an individual to be drawn to the priesthood as a way of life. The life of a priest is a life of service. It always has been. It offers more opportunities to reach people, to teach, uplift, encourage, counsel, heal and bless them than any other calling. Status seekers travel other paths. Those who follow in the footsteps of Jesus as priests do so as servants of all.

2. Career versus Vocation. Some look upon the priesthood simply as a career, a profession that a man can choose from among several others. It is then said that fewer men choose priesthood because career choices are more plentiful today. Here again we have a secular approach to the priesthood. While guidance counselors may put the priesthood in the general category of clergy, and the clergy on the level of the legal and medical professionsif for no other reason than because of the graduate studies requiredthe priesthood stands apart from all those others.

Priesthood, from a human perspective, is a vocation, in the strict sense of the worda calling, a response to a call by God. From God’s perspective, it is a choice God makes of an individual for ministry. You did not choose me, but I chose you, Jesus said (Jn. 15:16).

Commentators also point out that there is little by way of advancement in the priesthood. This, we are told, adds to parents’ disinclination toward encouraging their sons to become priests. It is understandable that parents want their children to get ahead, to be promoted, but the priest who strives to be Christlike is committed to leaving the high places to others. Those of us who are called to leadership in the church must be reminded, and we must remind ourselves over and over again, that God dethrones the proud and lifts up the lowly (Lk. 1:52).

3. Possessions versus Vision. A recent visitor to St. Patrick’s Cathedral told a Times reporter, Children can make a better life than a religious life now. For better life read money. We can’t blame parents for wanting their children to be well off, to have all they need to live a good life and, for that matter, even more than they need to live comfortably. Most priests in our part of the world live comfortably; many priests in the other parts of the world do not.

But those who are called to the priesthood are challenged to be visionaries, to see beyond the material wealth of this world, to look into the future life. Through prayer and contemplation on the mystery of God and the eternal truths, priests are to put things into perspective in their own lives and to help others do the same in their lives. Priests are to teach people through word and example how to put first things first. For what will it profit them if they gain the whole world but forfeit their life? (Mt. 16:26).

4. Security versus Satisfaction. It is said that priests today endure more stress because of the bad publicity created by the failures of a few, the heavier workload that is a consequence of fewer ordinations and the dissatisfaction felt by many Catholics because of the ineligibility of women for ordination. These conditions, it is said, lead to priests’ experiencing a lack of emotional security. These are indeed challenges we face, but priests in pastoral ministry and counseling know full well that priests are not the only ones under stress. People in all walks of life face stressful and emotionally disturbing situations in today’s society. Priests, in fact, probably face fewer than most. Furthermore, generally speaking, priests have more and better means than most to deal with stress. They have an intimate relationship with Jesus, a prayer life, opportunities for spiritual direction, counseling and retreats. Also, for those who make the most of it, there is the fraternal spirit among priests that can make the yoke easier and the burden lighter.

But priests have even more than these resources. They have the deep satisfaction that comes from making a difference in the lives of others in an almost unlimited number of ways: preaching the message of God’s love, reconciling families, pardoning sinners, consoling the sick, challenging people to use their gifts for the common good and, in a way open only to the priest, celebrating Mass and making the body and blood of Christ available to God’s family.

5. Immediate Family versus Extended Family. One reason why parents do not encourage their sons to become priests, it is asserted, is that they want grandchildren. I suppose the desire to have children of their own may deter some men from responding to the priestly vocation. Who can blame them? However, most priests become fathers to a larger family than they ever could have imagined.

Many of us have brothers and sisters, and their families are our own. We love them and they love us. We are in a position, often enough, to help them as though they were our own children and grandchildren. But beyond these family members we become spiritually related to all we baptize and at whose marriages we officiate, all we preach to and teach, all those with whom we celebrate the sacraments. People embrace us and welcome us into their homes. The priest’s extended family is often immense.

No one should ever be coaxed to become a priestby parents, by priests, by anyone. On the other hand, a little encouragement of a likely candidate along the way wouldn’t hurt.

The Most Rev. Frank J. Rodimer is bishop of Paterson, N.J.

Show Comments (
1
)
Comments are automatically closed two weeks after an article's initial publication. See our comments policy for more.
15 years 5 months ago
The articles by Eugene Kennedy and Bishop Frank Rodimer in your vocation and ministry issue (7/2) are outstanding. Kennedy’s is a breath of fresh air and is right on. Rodimer’s is concise and right on target too. Thank you for both, and congratulations to the writers.