Being Catholic in a Jesuit Context 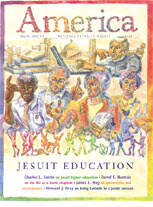 Even if there were no Ex Corde Ecclesiae or U.S. bishops’ Application, those involved in higher education in Catholic and Jesuit universities would be examining the mission and the direction of our institutions. Publications like Michael J. Buckley’s The Catholic University as Promise and Project: Reflections in a Jesuit Idiom (1998) and James Burtchaell’s The Dying of the Light: The Disengagement of Colleges and Universities from Their Christian Churches (1998)to mention only two vastly different approachesillustrate the deep contemporary concern about whether and how religiously affiliated colleges and universities will integrate their faith commitment with academic excellence.

My comments focus on the meaning of Catholic in a Jesuit university. They come from a pastoral concern that I believe to be radically Ignatian: How can the hearts of good and dedicated men and women who work within a Jesuit university or college be touched by the Catholic tradition that supports the distinctiveness of their institutions? The inspiration of Ignatius Loyola was to help people as God had helped him. This same inspiration led him to see the church as a helping church, a community oriented to the pastoral service of people. Can this kind of approach be translated into terms that have meaning for those members of the academic community who are neither Jesuits nor Roman Catholic? Can the heart of the church touch other hearts?

In his apostolic exhortation Ecclesia in America, John Paul II emphasizes the idea of encounter with the Lord as characterizing the specific inspiration of the Catholic mission. He emphasizes three specific areas where this encounter takes place: Scripture, the liturgy and other people, "especially the poor, with whom Christ identifies himself." This encounter with Christ in the people who are in the university is vitally important to the way we characterize an institution as Catholic.

Joseph P. Daoust, S.J., a former professor of law at the University of Detroit Mercy, has pointed out that English, unlike many other languages, has only one word for law. Latin, for example, has two, lex and jus. Lex refers to the codification that expresses, protects and develops those human rights that found society, while jus refers to that radical, foundational reality of human rights that characterize relationships within society. Something like this distinction can also be made about the word Catholic. Catholic can mean an encounter and Catholic can also mean the codification of beliefs, conduct and worship that have emerged because of that encounter.

By Catholic as encounter I mean that the human search for the divine and the divine openness for the human meet in Christ. The desire to be with God and the choice to be with God, this mystery of human encounter, finds its radical and primary meaning in Jesus Christ. As human, Christ is total openness to the divine; and as divine, Christ is total availability to the human. His mediation is the great gift on which Catholicism rests. As Jews found their identity on the covenant, the law that made them God’s chosen people where the divine and human meet, so Catholic Christians meet God in Christ. This encounter is the pearl of great price, the treasure buried in the field, the mercy extended to tax collectors, sinners and even the self-righteous.

If God, then, meets us in Christ, plurality and diversity are part of this encounter. For we can meet Christ only within our specific reality, within our individual temperament, history and graces. This experience of encountering Christ can be shared, can take place within a community and has social ramifications. But fundamentally it is an individual experience, and each person is unique.

Therefore the Catholic character of a university will be diverse. That diversity, in turn, urges us to find union, not uniformity nor conformity. By union I mean a mutual regard for one another precisely as a privileged place where the divine and the human meet, as privileged as Scripture and the Eucharist in realizing Catholic identity. Clearly we have to trust that there are levels of participation in the specifically Catholic mission of a university or college. Is there an ecumenical process that is both deeply religious but genuinely acceptable to those of other beliefs or no formally religious belief? I would point to the spiritual tradition I know best, that of Ignatius Loyola.

In his advice to young Jesuits about how to be contemplative in the midst of activity, Ignatius has provided such a process (Constitutions, No. 250). First, he says that there has to be a focus, an ability to stand before another reality in ways that center your interest, orient your senses and organize your own interior so that you really look at, hear and are present to that reality. Then Ignatius offers three levels of presence: attention, reverence and devotion.

By attention, I allow the reality of the other to be present to me on its terms so that I stand before another in mutuality. Then I reverence what I have given attention to; that is, I hold the other, precisely as other, as different from me yet present to me, in esteem and in care. I do not reject, but I accept. I do not modify, diminish or dismiss the other. I care for that other reality in all its uniqueness so that the encounter becomes a holy place. When I live with such attentive and reverent presence to another, then, Ignatius says, we can expect to find devotion, a term of rich significance for him. Devotion is the discovery of how God dwells within this realityfor example, this person, this poem, this experiment, this placelong before I come on the scene. For Ignatius the resolution of every human encounter should be the discovery of God’s presence.

The Catholic emphasis should be ecumenical. It should inspire and support those human encounters that invite people to find how God dwells within all human reality. Some faculty or staff members may identify this divine indwelling as truth or compassion or culture or service because they cannot accept the notion of God. What the Catholic encounter asks, I believe, is that they be people who bring focus into their lives in ways that permit attention, reverence and devotion to take place so that their ultimate value, their pearl of great price, can be acknowledged.

For example, every university has committees. Suppose that there is a committee on student life, established to give oversight and advice on ways the university can enhance the students’ journey into responsible adulthood. The committee will most probably be assembled from a number of university departments. These committee members will represent a variety of ages, experiences, beliefs and perspectives. For diversity of viewpoint is the reason you have a committeeto insure that the richness of the university community be tapped. But these committee members have to be united in their desire to do what is best for student life. How do you bring a diverse group into effective decisions about what is best for student life? If you add to the committee mission its further identity as a Jesuit and Catholic university, then there are other questions to be addressed.

From my experience, one way to bring Catholic and Jesuit into the process is by helping the committee to focus on issues that promote an attentive listening to the data, even data one does not like to hear. Second, I suggest that an honest acceptance of the data should also become reverence for what the members discover. For example, that gay students feel profound alienation within the university community may be a reality that I find hard to accept. But once I do accept it, I also have to extend genuine care for this as an experience some people claim as theirs. It may not be mine. I may feel uncomfortable before it. But I cannot simply disregard it or belittle it or reject it as someone else’s problem. I honor it as someone’s genuine experience. When a committee moves into this kind of psycho-religious acceptance, the members can see the crucial question: What deeper realities are God or our educational mission or our humane values asking of us? How does God’s concern dwell here?

I would suggest that this Ignatian dynamism of attention, reverence and devotion is also at the heart of the Catholic encounter. I would suggest that Jesuit and Catholic center more on a process of inquiry and a search for discovery than a program of indoctrination and imposition.

I believe that this lies behind the following text (No. 37) from Ex Corde Ecclesiae:

The Ignatian priority of pastoral service within and for the church is, reductively, a desire to make the church a moment of pastoral encounter. Jesuit universities and colleges remain intimately involved in this overriding mission.

Howard J. Gray, S.J., is the director of the Center for Ignatian Spirituality at Boston College in Chestnut Hill, Mass., and the project director of its Lilly study on vocations.