Death in a Small Place 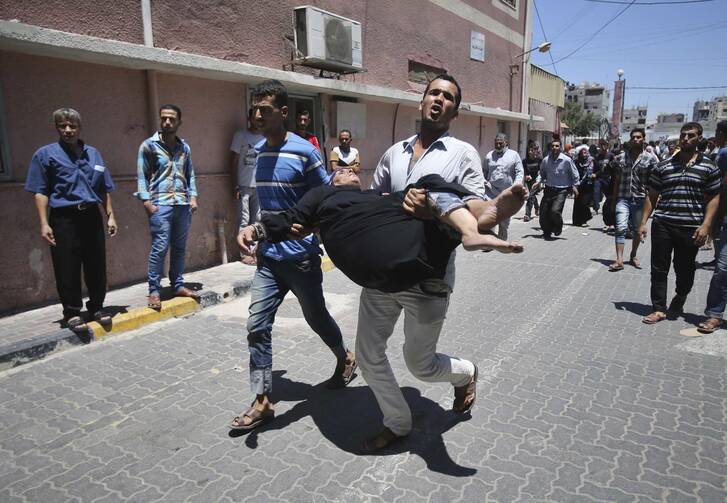 Gaza is being reduced to rubble while the world watches on YouTube and CNN. It has been as dispiriting a display of inhumanity and failure as one can imagine, yet it has not been enough to compel either side to accept a halt to the carnage. Each night new images of what Israeli Prime Minister Benjamin Netanyahu described as “telegenically dead Palestinians” are paraded across television and computer screens.

The prime minister accuses Hamas of deploying the people of Gaza as human shields, “forcing” Israel to kill Gaza’s men, women and children in a cynical, ruthless campaign. If so, he has enthusiastically partnered with Hamas leadership in the effort.

The Israeli Defense Forces’ incursion each day drives up the Palestinian casualty figures while offering Hamas fighters the opportunity to restore what had been the organization’s diminishing esteem through combat that has taken 64 I.D.F. lives. The I.D.F. has managed to kill 200 or so of Hamas’s 10,000 fighters, but this most recent assault has claimed more than 1,800 lives. The U.N. estimates that 69 percent of the victims of the increasingly indiscriminate shelling have been noncombatants.

Gaza, one of the most densely peopled places on earth, has been further diminished during this minor apocalypse. The incursion has demolished more than 4,000 homes and inhabitable area of the territory by 44 percent. With its electric grid destroyed and water and sewage capacity compromised, Gaza is on the verge of becoming essentially uninhabitable.

In response to the crisis, the U.S. Congress declared unanimous support for the Israeli war effort and called on Hamas to disarm itself and Palestinian President Mahmoud Abbas to terminate the unity government with Hamas. The Obama administration offered pro forma expressions of concern as the civilian death toll went higher, but did little else to stay the Netanyahu government’s hand. A more pointed gesture, and one that might have restored U.S. status as a credible broker for peace, would have been to decline Israel’s request for munitions to restock supplies exhausted over the skies of Gaza.

This latest conflict will eventually end with or without a negotiated cease-fire. It seems likely that its only “victors” will be located at the extremes of Palestinian and Israeli societies. What comes next? When the fighting stops, finding ways to encourage the beleaguered forces of moderation will be the primary obligation of all people of good will. (See Signs of the Times, pg. 8.)

As in past conflicts in Gaza, the United Nations has described Hamas and I.D.F. actions, including indiscriminate rocket attacks and the shelling of U.N. refuges, as possible war crimes. Perhaps this time the United Nations should pursue such serious accusations to their logical and just conclusion. Acts of terror by Gaza militants should be prosecuted, and decisive action against violations of both international law and human dignity should not be construed as efforts to demonize Israel.

America’s editors have repeatedly addressed the Israel-Palestinian problem, urging restraint, dialogue and even a reassessment of a U.S. policy of unblinking diplomatic and military support for the State of Israel and pressing for the two-state solution both sides claimed to be seeking. Now, judging by comments made by Prime Minister Netanyahu during the crisis, the current Israeli leadership is no longer interested in that option. But a one-state solution will surely mean either further segregation of Palestinians in an apartheid state or a criminal policy of mass expulsion. Neither is an outcome that the United States should be willing to accept.

The Obama administration was stoned from all sides as it fruitlessly pursued the usual suspects in negotiating a ceasefire during this current crisis. Now it should just as energetically locate and support new actors in Palestinian and Israeli civil society who offer some hope of breaking through the calcified positions of the current political establishment. Christian, Muslim and Jewish leaders of the Holy Land should revisit the commitments they made in Alexandria, Egypt, in 2002 to “seek to live together as neighbors, respecting the integrity of each other’s historical and religious inheritance” and decide what a practical expression of that pledge means today.

At the Vatican’s invocation for peace in Israel and Palestine in June, Pope Francis said: “Peacemaking calls for courage, much more so than warfare. It calls for the courage to say yes to encounter and no to conflict: yes to dialogue and no to violence…yes to sincerity and no to duplicity.” But beyond courage, the pope said peacemaking “takes strength and tenacity.”

All of the strength and tenacity of the peacemakers will soon be put to the test—again—but how much harder will be their work once this senseless slaughter in Gaza ends.