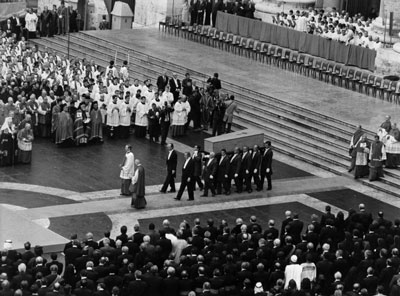 Death always comes too soon for those we know and love, but the abrupt news of the death of Pope John Paul was disquieting in a special way. In only 34 days as the Supreme Pastor of the Roman Catholic Church, he had captured the imaginations of Catholics and non-Catholics alike. Veteran Roman obervers were astonished by the crowds that kept growing each week for his Wednesday audiences and Sunday noon appearances in St. Peter's Square. Although a shy and self-deprecating man, he seemed to possess a rare gift of communication. He spoke to enormous crowds with a simplicity and directness that was unusually personal. He even seemed a little out of place in the magnificence of his new home, and this, too, many found appealing. Above all, he was a man of transparent religious faith, and the serenity of his inner life made him, once history had placed him on the world's stage, a sacrament of hope for the dispirited men and women of his time.

Now he is gone. There was no time in his brief tenure for major decisions or pronouncements. We will never, know just what kind of a Pope he would have become in the years ahead. We mourn the passing of a promise that had no time to be realized. And yet the promise itself has demonstrated a power that must influence the meaning of the papacy in today's world. The response of so many to a man so little known is a convincing reminder of a deep human need: In a secularized world faith and hope must be possible. John Paul had the ability to awaken the sense of these possibilities in those to whom he spoke. He did it with simple anecdotes, disarming analogies, homely gestures and with stunning success. He leaves behind him no doctrinal statements or administrative achievements. History can pass no judgment on him as a theologian or diplomat. He will be remembered, though, as a gifted religious teacher, one who could bring the message of the gospel into the daily experiences of human life in a way that illuminated and enlarged them.

Despite the brevity of his moment in the chair of Peter, Pope John Paul altered the public perception of the papacy significantly. The importance of the Pope's role as a religious teacher has been dramatically underscored. It is a role that is peculiarly suited to an age when, underneath the often brittle sophistication of contemporary culture, so many are haunted by the temptation of despair and are hungry for a spirituality that will give their lives meaning and purpose. Pope John Paul was able to touch this chord in the human heart, and so he made the message of the gospel believable. As a result his words carried a moral authority that could never be guaranteed by any title.

As the elector cardinals once again assemble in Rome to select a successor to John Paul, the atmosphere of this October conclave is inevitably different from that of last August. The shock of the Pope's death may unsettle some of the assumptions that guided their thinking in the weeks after the death of Paul VI. But surely the memory of Albino Luciani's personal appeal to the people of our time will also affect their decision. Throughout the world Catholics and non-Catholics alike would welcome a "holy father"—a man of simplicity and poverty who can speak of his faith in a language that can be understood. The passing of John Paul meant the passing of a promise, but it is a promise that can still be redeemed.

Is there any record of the public addresses that JPI did manage to give?

one can find a full record here:

Michael Barberi
9 years 11 months ago
Given the fact that John Paul sent a letter of congratulations to the first couple in the world to conceive a child by in vitro fertiization is a clear indication that his philosophy and theology on marriage and procreation was quite different from Paul VI and John Paul II. John Paul II would never have sent a warm congratulatory letter to this couple because he firmly believed in vitro fertilization was intrinsically evil. Only God knows the type of pope John Paul would have become. God bless his soul.