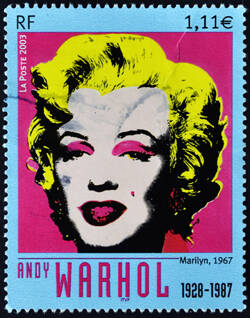 She was a sex symbol. This is the way Hollywood merchandised her; this is the way her international public wanted her. This was Marilyn Monroe's one, great, continuing role. She would have preferred another. She wanted to be a serious actress. But Hollywood, her public and, perhaps, her own limitations made any change impossible.

"I never quite understood it—this sex symbol—I always thought symbols were those things you clash together," she once remarked in an off-camera per- formance patterned after the dumb-blonde dialogue that brought her fame and fortune. "That's the trouble," she continued, "a sex symbol becomes a thing. I just hate being a thing."

Understandably, the world is shocked and saddened by the death of the famous 36-year-old actress. The world wonders why. Why should a wealthy, beautiful young woman suddenly become Coroner's Case No. 81128?

In a certain tragic sense, the public was voting for it to turn out this way all along. The ballots were cast each time a dollar changed hands at the box office. But this celluloid symbol of sex was more commodity than candidate, and, as she herself said, she just hated being a thing. A thing is dead from the beginning. A thing doesn't have a soul. The sex she symbolized was false and cheap. But that's what her public whistled for. Miss Monroe was unwilling or unable to keep the body and the soul of sex together.

The Editors
Show Comments (
2
)
Comments are automatically closed two weeks after an article's initial publication. See our comments policy for more.
Robert Killoren
9 years 5 months ago
There is no doubt that Norma Jean suffered a lot under the burden of being a sex bomb, but it is also true that she made choices to use it to manipulate others to get her own way. It was a power that could be used to integrate self if used right or disintegrate self if misused. It really isn't any different than the charisma that some politicians have.
Edward McEnroe
9 years 4 months ago

"I just hate being a thing." Many women have said this globally in every age. Unfortunately the untimely death of Norma Jean aka Marilyn Monroe has left many secrets unanswered. Usually with secrets there are cover ups. Many believe Marilyn Monroe knew too much information about the Kennedy Brothers, Jack and Bobbie that could make big trouble in the White House and therefore she had to be eliminated. Without a strong support of family, friends and even a faith community, living a life of integrity becomes a challenge. Still the facination, sadness or even grief over the death of one Hollywood celebrity. How many other lives are forgotten on a daily basis. Perhaps this is an opportunity for humanity on the planet to wake up. All my hopes.