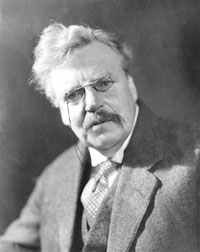 At least six times during the last few years I have found myself in a situation in which I should certainly have become a Catholic, if I had not been restrained from that rash step by the fortunate accident that I was one already.

The point is not merely personal but has some representative interest, because our critics constantly expect the convert to suffer some sort of reaction, ending in disappointment and perhaps desertion. As a rule, the most that they will concede to us is that we have found peace by the surrender of reason; which generally means in practice that we pass the rest of our lives in interminable controversies with a perpetual appeal to logic. But, as a fact, it is in a rather peculiar sense the other way about. The strongest sort of confirmation often comes to the convert after he has received enough to establish conviction.

In these articles I propose to discuss some examples of this singular sort of post-conversion conversion. I mean that things have happened, since I was received into the Church, which would in any case have rendered impossible any intellectual position outside the Church, and especially the position in which I originally found myself.

One occasion was the Parliamentary settlement of the controversy on the prayer book—or prayer books. Another was the Lambeth decision, or indecision, about birth control.

But I will take first the example of the latest turn of political events in Europe. I take it first because it is both typical and topical; that is, it gives perhaps the clearest and simplest example of the sort of thing I mean, and it is a thing of which the facts are fresh and familiar to everybody, even those who live only from day to day with the assistance of the daily press, that very synthetic substitute for daily bread.

But in order to explain what I think has really happened rather more lucidly than the daily press explains it, it is necessary to say a preliminary word about the Protestant Reformation and the sense in which its consequences, rather than itself, continue to bewilder and mislead Christendom.

Men of the type or school of Bishop Barnes or Dean Inge are, as we know, very fond of appealing to the discoveries of science; generally the not very recent discoveries of nineteenth-century science. They delight in dealing with what my grandfather would have called the Testimony of the Rocks; the geological record of natural development; and they often treat fossils and similar traces as if they were sacred hieroglyphics, by which some priesthood had symbolized the secret of the universe. And yet it is doubtful, it is more than doubtful, whether one of the Broad Church ecclesiastics would be soothed and flattered if I addressed him personally as an Old Fossil. Nor indeed should I dream of indulging in this playful form of social address; since there are truths, or half-truths, that cannot be coarsely stated without giving rise to misunderstanding even about their true meaning.

In one sense these liberal theologians are interested in fossils. They continue to demonstrate the Darwinian theory from the geological record, by means of all the fossils that ought to be found in it. They will even explain luminously why the geological evidence does not apparently exist; and they seem to think that this is quite as convincing as if it did exist. But I doubt whether they have really thought profoundly and delicately about what a fossil is, or there would be no danger of their resenting so innocent and inoffensive a comparison. For a fossil is really a very curious thing.

A fossil is not a dead animal, or a decayed organism, or in essence even an antiquated object. The whole point of a fossil is that it is the form of an animal or organism, from which all its own animal or organic substance has entirely disappeared; but which has kept its shape, because it has been filled up by some totally different substance, by some process of distillation or secretion so that we might almost say, as in the medieval metaphysics, that its substance has vanished and only its accidents remain. And that is perhaps the very nearest figure of speech we can find for the truth about the new religions, which were started only three or four hundred years ago. They are fossils.

It is easy to see the sense in which they are now dying. But in a much deeper sense, they have long been dead. The extraordinary thing about them was that they really died almost as soon as they were born. And this was due to a fact not always emphasized, but which always strikes me as the most outstanding fact of the mysterious business; the incredible clumsiness of the Reformers.

The real Protestant theologians were such very bad theologians. They had an amazing opportunity; the old Church had been swept out of their way, along with many things that were really unpopular, and some things that were deservedly unpopular. One would suppose it was easy enough to set up something that would at least look a little more popular. When they tried to do it, they made every mistake that they could make.

They waged an insane war against everything in the old Faith that is most normal and sympathetic to human nature, such as prayers for the dead or the gracious image of a Mother of Men. They hardened and fixed themselves upon fads which anybody could see would pass like fashions. Luther lashed himself into a sort of general fury, which obviously could not last; Calvin was logical, but used his logic for a scheme which humanity manifestly would not long find endurable.

Perhaps the most successful were those who really had no ideas to offer at all; like the founders of the Anglican Church. They at least did not exasperate human nature; but even they showed the same blindness, in binding themselves instantly to the Divine Right of Kings, which was almost immediately to break down.

For this reason, there is really no historical doubt about what Protestantism did; it died. It did not die because the Protestants were wrong; Mahomet, for instance, was a far shrewder person, and his heresy has not died.

The creed of the Protestants died, not because they were wrong, but because they were wrong-headed. They did not really think what they were doing; and this was chiefly because the real driving force behind them was the impatient insolence and avarice of new nobles and rebellious princes. But, anyhow, the theological and theoretical part of their work withered with extraordinary rapidity; and the void that was left was almost as rapidly filled with other things.

What those things were is clear enough in many cases, including cases much more apparently harmless; but it is clearest of all in what is confronting us today: the race religion of the Germans.

Needless to say, there was no such nonsense talked in Luther’s time, or for long after his time; and least of all, to do him justice, by Luther. Germans were turbulent and a little barbaric, as he was himself; but it is only fair to him to say that he was a Christian, in the sense that he believed nothing could be done except in the strength of Christ.

A superbly typical story reaches me from Germany; that some of the Nazis started to sing the great reformer’s famous hymn, “A strong fortress is our God” (which sounds quite promisingly militaristic), but found themselves unable to articulate the very words at the beginning of the next verse, which run, “Of ourselves we can do nothing.”

Luther did, in his own mad way, believe in humility; but modern Germany believes simply, solely and entirely in its pride.

That is an example of what I mean by a void being filled up, not only by another substance, but actually by an antagonistic substance.

Luther was subject to irrational convulsions of rage, in one of which he tore out the Epistle of St. James from the Bible, because St. James exalts the importance of good works. But I shudder to imagine into what sort of epileptic convulsion he would have fallen, if anybody had told him to tear out the Epistles of St. Paul, because St. Paul was not an Aryan. Luther if possible rather exaggerated the weakness of humanity, but at least it was the weakness of all humanity.

John Knox achieved that queer Puritan paradox of combining the same concentrated evocation of Christ with an inhuman horror and loathing for all the signs and forms and traditions generally characteristic of Christians. He combined, in the way that puzzles us so much, the adoration of the Cross with the abomination of the Crucifix. But at least John Knox would have exploded like dynamite if anybody had asked him to adore the Swastika.

All this new Nordic nonsense would seem to have nothing whatever to do with Protestant theology; or rather to be completely contrary to it. No one is more sincerely glad than we are to know that some of the German Protestants are still most consistent and courageous Christians; and that a definite number of the Lutherans still have some sort of remote connection with Luther.

But, taking the development simply as an historical development, as a part of the science and philosophy of history, it is obvious by this time that the hollow places that were once filled with the foaming fanaticism of the first Reformation doctrines are now filled with the foaming fanaticism of a totally different kind. Those who are rebelling like Luther are rebelling against Luther.

The main moral of this is so large and simple and striking that it will soon be impossible to conceal it from the world. It is the simple fact that the moment men began to contradict the Church with their own private judgment, everything they did was incredibly ill-judged; that those who broke away from the Church’s own basis, almost immediately broke down on their own basis; that those who tried to stand apart from authority could not in fact stand at all.

But there is another moral, in the particular case of the German race religion, which specially illustrates my point, and with which I will deal in another article.