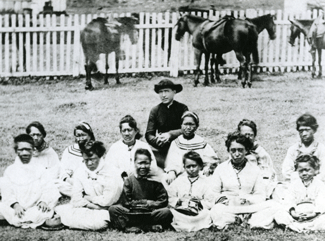 When Pope John Paul II slipped in his bathtub on the evening of April 28, he fractured more than his right thighbone. The papal itinerary for the next several months was also pretty well shattered, and before it can be rescheduled many disappointed people will be obliged to revise their own travel plans.

For instance, more than 400 Hawaiians, including the state's Governor John D. Waihee 3d, had intended to be in Brussels, Belgium, on May 15. The Pope was to preside there that day at the beatification ceremonies for Joseph De Veuster, who was born to a Flemish farming family on Jan. 3, 1840, and was widely known in the United States and Europe as Father Damien of Molokai when he died on April 15,1889. On that outlying Hawaiian island, he had for 16 years been working in a settlement for the victims of leprosy--or Hansen's disease, as it is now called--and he had himself contracted the disease five years before he died.

It has been necessary, of course, to postpone the beatification, and a new date has not yet been announced. But the delay does not mean that recognition of Damien's holiness is somehow pending. Almost from the day of his death he has been canonized, so to speak, by popular acclaim.

All the same, Damien's beatification is not a matter of indifference for the church. As Karl Rahner pointed out, the church has a duty to proclaim the holiness of its greatest members because it has the duty of proclaiming the grace of God and what it has wrought.

In the first Christian centuries, those proclaimed saints were usually martyrs. Nowadays, those most often venerated are men and women who in their time were great humanitarians-missionaries, builders of hospitals and schools, servants of the poor and the abandoned.

Even in this shining company, Damien stands out, as one can see from a good biography like Gavan Daws's Holy Man: Damien of Molokai. When Joseph De Veuster, a strong and devout 19-year-old, entered the Congregation of the Sacred Hearts of Jesus and Mary in Louvain, he took the name Damien. In the fall of 1863, he set sail for the Hawaiian mission and was ordained in Honolulu on May 21, 1864.

Almost exactly nine years later, having volunteered for the neglected leper colony stranded on Molokai, Damien reached the island on which he would die. The settlement had a spectacular location at the foot of towering cliffs facing tropical seas, but when Damien arrived, living there was like living in a suburb of hell.

He was, first of all, the people's priest--celebrating Mass for them, hearing their confessions and keeping vigil at their deathbeds. But he also transformed the colony physically as well as spiritually. Gavin Daws quotes an observer who described how the young priest went to work: "A vigorous, forceful, impellant man with a generous heart in the prime of life and a jack of all trades, carpenter, mason, baker, farmer, Medico and nurse, no lazy bone in the makeup of his manhood, busy from morning till nightfall."

But there was much more to Damien than the social activist who could quarrel vigorously with civic and ecclesiastical bigwigs when they were slow to back improvements for the leper colony. He had an inner life that energized and sustained his outer life.

He spent the first hours of each day in prayer. Even in his final illness he slept on a straw mattress laid on the floor. And he constantly refreshed his spirit by reading the Imitation of Christ, a 15th-century treatise that was once the most popular of Catholic devotional books.

Today the Imitation is often dismissed as unsound because, on the one hand, it emphasizes austerity, humility, solitude and unremitting self-scrutiny while, on the other hand, it says nothing about the service of others and is contemptuous of secular culture.

Yet the genius of the book is proven by the way it spoke so powerfully to an ardent heart like Damien's: "Let it be our chief study to meditate on the life of Jesus Christ .... Jesus has many lovers of his heavenly kingdom, but few who are willing to bear his cross."

Damien did indeed want to help the miserable, but for a reason that went far beyond decent compassion. He went to Molokai because he knew unerringly that this was to be his way of loving and following the Christ who said: "What you do for one of these least ones, you do for me."