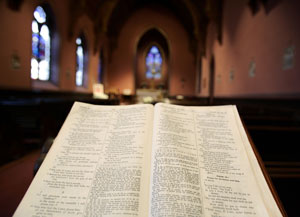 Anyone wondering where to begin his reading of the 16 conciliar documents could do far worse than select the “Constitution on Divine Revelation.” Worthy to take its place with the other three constitutions (which deal with liturgy, the Church, and the Church-world relationship), it has for the ordinary Christian the additional advantages of brevity, simplicity and a certain limpid quality that makes it a joy to read. No other document of Vatican II surpasses it for sustained pastoral and religious tone.

Its subject is, as successive chapters detail it, the word of God, communicated to man in revelation, handed on through the apostles and the Church, and committed to writing through the inspired Old and New Testaments, which nourish the life of the Church.

Each of the Council documents has its own drama. This one cast John XXIII in a critical role. When a majority of the Fathers found an earlier schema entitled “The Sources of Revelation” abstract, unecumenical and one-sided, Pope John intervened and ordered a new draft by a joint commission drawn from both Cardinal Ottaviani’s theological commission and Cardinal Bea’s Secretariat for Promoting Christian Unity. The eventual outcome was the present statement, with a new title, orientation and character.

What is perhaps most striking about the constitution is its serene concern for balance and harmony between opposites. The analytic theological mind is fond of sharp and tension-filled distinctions; the pastoral mind, presupposing the distinctions, wants to offer the people a concrete and unified mystery for its faith, worship and life. That is what this constitution does regarding the word of God.

Thus, revelation is presented as both doctrinal and historical; divine words and deeds are complementary. There is the traditional notion of the harmony of Old and New Testaments, the New hidden in the Old, the Old manifested in the New. There is, of course, the harmony of Scripture and tradition; remote from controversy, the text asserts: “Sacred tradition and sacred Scripture form one sacred deposit of the word of God committed to the Church.” There is the beautifully expressed harmony of word and sacrament: “From the table of both the word of God and the Body of Christ, especially in the sacred liturgy, the Church unceasingly receives and offers to the faithful the bread of life.”

Other dual unities too numerous to mention await the reader: divine inspiration and human meanings; literary forms and particular texts, but also the unity of all Scripture, seen in the light of tradition; the labor of exegetes and the judgment of the Church; and so on.

What pervades all this is pastoral purpose: that the revealed, inspired, transmitted, proclaimed word of God may be the life of the People of God. It would be a mistake to read this document in any other spirit. But a far worse mistake would be not to read it at all.