This I Believe: Created in God's Image 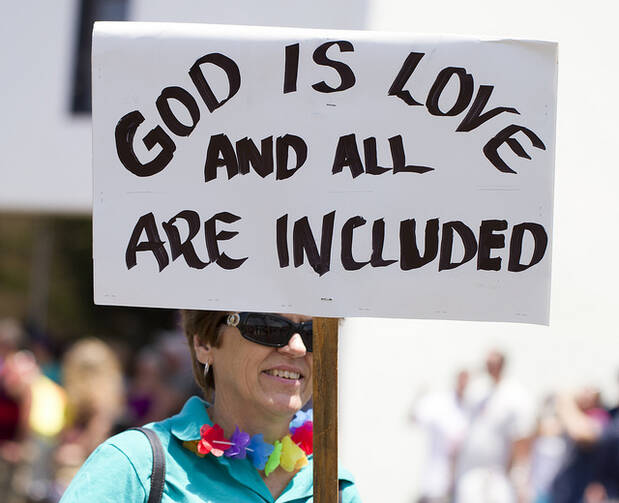 In a five-part series released the week of March 16th from the National Catholic Reporter, "God’s Community in the Castro," a parishioner from San Francisco’s Most Holy Redeemer parish had this to say about his spiritual home: "We don't see ourselves as a gay community, but rather as a community that's open to gays.... It's an acceptance and a realization that people feel O.K. to be who they are that makes this place different.”

For many LGBTQ men and women, The Castro District of San Francisco has been their home where life can be lived with dignity. As NCR reporter Thomas C. Fox points out in this series, Most Holy Redeemer has been the spiritual center for LGBTQ Catholics living in and around this neighborhood. Much of its current history started in the 1980s, when AIDS was taking so many lives. Since then this parish has been the sanctuary for an often neglected and shunned community.

As Catholics, we have a sense of the church being a truly universal home, a place where all are welcome, as the name Catholic would indicate. Yet within that sense of universality there are many who feel the church is not a welcoming home for them. Teachers have been terminated from jobs, children with disabilities have been refused sacraments, and many divorced men and women continue to feel unwanted. You don’t have to look hard to find similar stories from African-American Catholics, Latino Catholics, Catholic women, and former Catholics alike. And all of this tension has caused people to leave the church and in some cases, lose their faith.

Yet here’s the truth I know and believe: I am created in God’s image and likeness, just as God creates us all. It is actually that simple. But sometimes we take that image and likeness and complicate it. That complication created concern for my loved ones as I discerned religious life in 2011 at the age of 33. Some were troubled that I’d find difficulty as a man of color in an ostensibly all-white male order. Others feared I would be forced into the closet after 17 years of accepting myself as gay. A few friends expressed worry I would not encounter common ground in an order filled with the privileged when I only knew disadvantage. All of their observations and concerns were valid because they not only came from a place of love but through their own experiences as Catholics.

I am more than my skin color, my sexual orientation, and my economic class. It restricts God’s image and likeness if I only see myself as those three aspects. Defining myself purely on what I am limits who I am and how I can be of service. Even allowing these characteristics to dictate my life would prevent me from engaging the world as a wholly integrated human being. Besides, I prayed, and discerned, and made a choice. I made a commitment to live the vows of consecrated chastity, poverty and obedience because of my belief in Christ, the mission of the church, and the people of God. I share my struggles openly just as I share my joys. As my parents did with each other, transparency helps me live my vows honestly so that I am always available to live out my calling as a Jesuit.

That’s the truth that sits within each of us: God made us all in his image and likeness. St. Francis de Sales said, “Be who you are and be that well.” To embrace all that we are—and to embrace each other with that love—is to embrace that image and likeness; it is to embrace God. Thirty-six years of life and my short time as a Jesuit have confirmed that truth. And so I pray that as a church we discover tender compassion for each other to love the God that dwells in us all.

Correction (April 17): An earlier version of this essay misidentified the author of the series of articles in the National Catholic Reporter. The author's name is Thomas C. Fox.

Damian Torres-Botello, S.J., entered the Society of Jesus in August 2012. He is currently a philosophy student at Loyola University Chicago. This article was approved for publication by his Jesuit superiors. It also appears in The Jesuit Post.