Faith in Focus
Embracing Christ First
Lorraine V. MurrayApril 22, 2000
A woman is hidden behind the white shower curtain. Judging by the sounds, I assume she’s soaping herself. Today is my first day volunteering at the Gift of Grace, a home where Mother Teresa’s nuns and volunteers care for poor women with AIDS. When I arrived earlier this morning, I asked

Faith in Focus
Faith in Focus: Called to Death Row
Thomas M. CondonApril 01, 2000
One February day last year, I was working at my office as Dominican formation director, when I received a call from Karen Pollard, B.V.M., of the St. Louis Archdiocesan Criminal Justice Ministry. She told me that a prisoner on death row in Potosi Correctional Institute, about 70 miles from St. Louis

Faith in Focus
Choosing Crocuses
M. Kathleen JoyceMarch 25, 2000
In early spring several years ago, I helped to lead a retreat for college students. The weekend felt intense and emotional, but also very loving and accepting. One speaker introduced his talk by requesting that we not clap for him, or hug him, or discuss his words when he finished. He would prefer, he said, for us to leave the room quietly and spend 20 minutes in silent meditation.

When the speaker finished his talk, I walked outside to a private little courtyard. For 20 minutes I stared at the trees in front of me. I saw huge, tall trunks, their branches like barren tentacles reaching into the gray, cloudy sky. I thought about a difficult talk we heard earlier in the day. A young man had painfully recounted the impact on his family of his father’s diagnosis with severe depression and admission to a psychiatric hospital.

I thought about my own family, anticipating how our loving circle might someday shatter. "What will I suffer when I have to face the death of one of my siblings or parents?" I wondered. Looking out to the dead trees, I pondered how we would handle Thanksgiving without mom to cook the turkey. What would the day be like without dad waiting at the door, greeting everyone with an exuberant "Happy Bird-Day"? I anticipated which disease would hasten my death, and which of my siblings would suffer tragedy first. Staring at the trees, I felt profound pain. I realized that I had been unconsciously focusing on the potential losses in my life for a long time.

The retreat director rang a bell, summoning us back to the conference room. As I turned to leave the courtyard, I glanced downward. There, at my feet, was a small, lovely garden. I must have seen the garden when I walked in, but I certainly did not notice it. Purple and yellow crocuses sprouted everywhere, their tiny cups of petals brimming with color and fragrance. They were beautifulno, exquisite! Such fragile life, beating back winter through sheer confidence in the promise of spring. I stared at the garden as the bell sounded again. How could I have missed such a glorious sight? I had just stood at the edge of the garden for 20 minutes! How could I possibly have missed it? Then I knew. As warmth comes when the sun breaks through the clouds, I understood.

I missed the crocuses because I chose to focus on the deadened trees. In the very same way, I had just spent 20 minutes pondering the potential deadness of my family, instead of reliving our joys and giving thanks for such wonderful people in my life. Epiphany! Our lives are full of deaths. Tiny deaths. Monstrous deaths. Tragic, unfathomable deaths. Our lives are also full of births. Renewals. Beginnings. Resurrections. I can choose to focus on the death or on the life. I can choose to see dying trees or birthing crocuses. I can choose.

I have often thought about my epiphany of dead trees and crocuses. Do I choose to suffer hopelessly, or to acknowledge grace in every moment? Do I opt to experience life as barren, fruitless trees, or as a vast garden of crocuses? Will I give in to death, or rejoice in never-ending birth? We see dead trees everywhere. They appear so visible, so obvious, so hard to miss. Crocuses, we have to hunt for. We have to sweep away moldy leaves and tattered litter, or scoop away dirty, leftover piles of snow before the crocuses appear. But the promise never fails us. If we move aside the deadness, and give crocuses a little room to grow, soon we see: 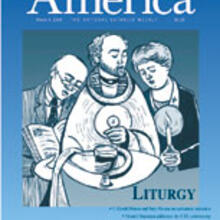 Faith in Focus
Adoro Te Devote
Amy L. FlorianMarch 04, 2000
I remember the darkened church, filled with a reverent silence interrupted only when an opened door allowed the sounds of traffic and voices to intrude momentarily. A heavy slam of varnished wood signaled the arrival of the next worshiper, who checked her name on the list and tapped the weary should

Faith in Focus
A Doll for an Old Woman
Mary RiveraJanuary 01, 2000
CABBAGE PATCH dolls were all the rage some years ago. My husband fell in with the crowd and bought several for my daughter, Christina, when she was little. I watched her play with them. She dressed them in old baby clothes that I still had, and carried them tenderly everywhere for weeks. Somewhere along the way she braided their hair for one last time, then left the dolls on a shelf, practically naked. That is where I found them after she moved out to go to college. I have saved them, perhaps for my granddaughters. I know what kind of mother she will be, because I watched her practicing.

We had old Barbie Dolls on a shelf too, those teen-age idols that lead our young girls to think they must be willowy and buxom at the same time. (Those dolls were gifts to my daughters; I never would have purchased them.) I got rid of Barbie and her sisters, collector’s items or not. All of nature has designed women to bear children. Women should have wide hips and a capacity for saving up nourishment for their children, for surviving a famine or a war and for living into an active old age. The images we hold in our hands, or our minds, have a way of coming true in our lives. I don’t want things in my house that send false messages.

Grown-ups have their dolls too. Statues are supposed to embody for us a reminder of some quality that we admire or perhaps even ought to emulate. Soldiers and saints are offered to us as heroes. Many avid gardeners keep small statues in their backyards, as I do. The effigies of writers and nameless pioneers hang in parks and libraries. The Statue of Liberty and Mount Rushmore’s famous Presidents’ faces dominate our country physically, as well as in political thought, although they will be overshadowed someday by Crazyhorse. This great sculpture of an Indian chief, carved from a mountain, points us to a renewed future in better relationship to all of nature. All these symbolic representations of human figures carry great meaning culturally, as any archaeologist will tell you. Should they be dug up a million years hence, they will speak well for our highest ideals. What we envision for ourselves as a nation is possible to achieve. What we envision for ourselves as individuals, we are likely to become.

A few years ago when I turned 50, my sister jokingly sent me a new "doll." She said it reminded her of me. This doll looks like a little old lady, with gray hair and wire-rimmed glasses, wearing a gaudy flowery printed dress and bedroom slippers, with stockings rolled down to her ankles. She has large purple earrings and a pearl bracelet and wears a red hat that "doesn’t go." She is carrying a bunch of purple flowers. Attached to her left wrist is a laminated copy of the poem taken from "Warning" by Jenny Joseph. It begins with the famous first line: "When I am an old woman, I shall wear purple," then goes on to describe her odd and outdated clothing, eccentric behaviors (like "learn{ing} to spit") and attitudes somewhat regretful of the past.

So then, I began to think, this is what it will be like for me. Old women are like that, wearing gaudy clothes, with idiosyncrasies in full view. Being very busy, I put all this at the back of my mind and went on tending to my house, my husband, my children, my pets, my job and my own mother. Actually, my mother was quite a bit like that, except for the spitting. I can’t imagine that I shall ever "spit," either. My mother lived with us for just over two years, and she was quite healthy and still active, although she could not drive anymore. She had "cabin fever" at times, after having given 22,000 hours of service to the Red Cross, and just as many to the thrift shop that supported the local hospital auxiliary. Now she spent her hours reading, watching television or taking a walk. She laughed with my husband over an occasional beer, and did some of the lighter household chores, which made her feel "useful." And then she died, quite suddenly, without warning. She died without any long illness, or excessive pain. She thought she had the flu on a Tuesday evening, and was dead on Wednesday morning. At 86, what more could you ask? I miss her laughter especially.

My mother’s death promoted me to the position of oldest woman in the family, the oldest of the siblings, with only two elderly aunts left. The generations were obviously moving forward. I don’t know what all that might entail, but it seems that I am the keeper of family reunions, old photographs and memories of childhood times together. I am the communication center already. One of the perks of the position is to be the "first to know" of births, graduations and problems of all kinds!

A few weeks after my mother’s memorial service, I found a suitable marker for this momentous event, and a symbol for the future that I like better than the old woman doll. I bought it in a gift shop near the beach. The artist is Jan Dymond of Corvallis, Ore. It is a clay figurine about 14 inches tall of a woman, rounded with age, her hands folded and her eyes closed, but her mouth in the form of an O as if in song. A number of cutouts admit light to the innermost parts, which are hollow. She came with a small clay cup to hold a candle. When the candle is lit within her, she shines out.

The Woman of Light, as I call this figure, now in the corner of my family room, reminds me of the story of the Presentation of Jesus to Simeon and Anna at the Temple, when he was an infant.

Anna and Simeon were old people, still at the Temple every day, probably doing some minor jobs and sitting against the wall in the sun, hands folded, as older people might do in rest. No doubt they talked aloud to God, in thanks or complaint, as I do already. Like my mother, they tried to be "useful." They blessed the little children, and counseled the parents. They sat in the Light, and their light shone out to others. This is who I mean to be as an old woman: a person who sits in the Light, who radiates Light to others. My song shall be one of praise to God for the wonderful things he has done for me all my lifeand that he does now for the others in my life. I wrote my own poem:

When I Am Old