Father Sam Sawyer on his first day as editor in chief and the feast of our patron, St. Edmund Campion 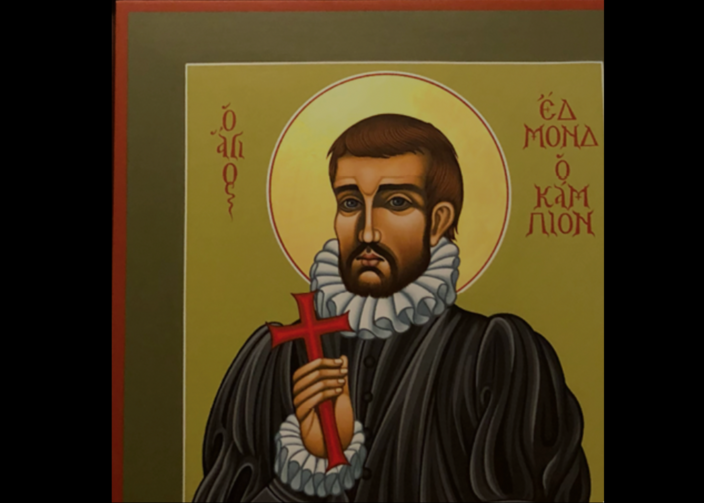 Icon of St. Edmund Campion, which hangs in the offices of America Media, by the Rev. William Hart McNichols.

A Reflection for the Feast of St. Edmund Campion, S.J., patron of America Media

It may seem odd—it certainly did to me at first—that a magazine called America should take as its patron an English Jesuit martyr, who considered himself a loyal subject of Queen Elizabeth and, in his famous “Brag,” devoted himself so eloquently to the restoration of the faith in Britain. So eloquently, in fact, that he was killed in response.

There are a number of explanations: When America was founded in 1909, Campion had been recently beatified in 1886; he was famed for his eloquence, making him an apt patron for writers, and early on, the community for Jesuit editors of America was named “Campion House”; and finally, during a time when Catholics were often suspected of not being good Americans, the model of a Englishman who had professed the compatibility of his Catholic faith with his love for country seemed particularly apt.

It is that last point that especially draws my attention today. For the Mass of Thanksgiving being celebrated today at the America Media offices, on a day when I begin my service as editor in chief and Traug Keller begins as president, we’ve chosen to use the first reading from Isaiah from the first Thursday of Advent and the Gospel from the readings for the feast of Campion.

In the first reading, Isaiah describes a song in the land of Judah, celebrating God’s deliverance and vindication of his people: “Open up the gates to let in a nation that is just, one that keeps faith. A nation of firm purpose you keep in peace; in peace, for its trust in you.” This hope for a nation that is just, that keeps faith, stands in common both for Campion and for the Jesuits who founded America in 1909, imagining it both as “a bond of union among Catholics and a factor in civic and social life.” There’s a longing there, which echoes the deep longing of Advent, for a day when the harmony, peace and justice of God’s design is realized in history and in our common life.

Maintaining a hope like that—continuing to long for it through years of injustice and oppression and conflict—takes grace. Which is to say: We do not sustain such hope by our own power or by confidence in our own vision, but instead by dependence on God’s promise and generosity.

Jesus in the Gospel also speaks to the complexity, and sometimes even the conflict, of such a hope: “I gave them your word, and the world hated them, because they do not belong to the world any more than I belong to the world.” The hope of the children of God, a hope for peace and justice, will often struggle with a world that is captive to other values.

We do not sustain such hope by our own power or by confidence in our own vision, but instead by dependence on God’s promise and generosity.

But though Jesus is clear-sighted about the challenge, he does not tell us to flee the world. Rather, he sends us into it, on mission: “As you sent me into the world, so I sent them into the world.”

That reversal, or maybe better put, that inversion, is the heart of what we hope and long for in Advent, because it is also at the heart of the Incarnation itself. God’s response to the world’s rejection, sin and injustice is deeper engagement. In the face of conflict, God enters in—not so as to deepen the conflict, but to be fully present to the reality of what God creates and loves.

That diving in and going deep is also at the heart of the Spiritual Exercises, in the meditation on the Incarnation, when Ignatius asks us to imagine the Trinity gazing on the world and choosing to send the Son. And at its best, Ignatian spirituality and Jesuit formation builds up an analogous instinct in us: that the response to conflict and challenge is not more contention, but deeper engagement, a diving in. The way to reconciliation is encounter.

That’s why, 113 years ago in the face of a strident American anti-Catholicism, John Wynne and his companions were bold enough to name the magazine America. That’s why the response was not primarily an apologetics or catechetical effort, but a “review of the week,” ready to write about nearly anything. In the words of the founding editorial announcement, it would be “cosmopolitan not only in contents but also in spirit.” The challenge, both in 1909 and in 2022, is for that cosmopolitan spirit to reflect its incarnational heart, the reality that Jesus does not take us out of the world but rather sends us into it.

As you walk into our newsroom, one of the dismissal formulas from the end of Mass stretches across the glass door: Go and announce the Gospel of the Lord. It’s how I’ve ended every Mass I’ve celebrated in this office; it’s how I’ll end Mass today.

St. Edmund Campion, “bragging,” promised that all the Jesuits of the world had “made a league” to seek the conversion of England. “The expense is reckoned, the enterprise is begun; it is of God; it cannot be withstood.” But even more than it is a brag, this is an expression of hope, of trust in God. The founding editors of America described the responsibility they felt “for the welfare of thousands of immigrants of our own religion who come to us weekly, and for their amalgamation into the national life.” More than 400 years after Campion, more than 100 years from America’s founding, we frame our hope and our responsibility in different words, but the words are different because we have kept faith with the same hope.