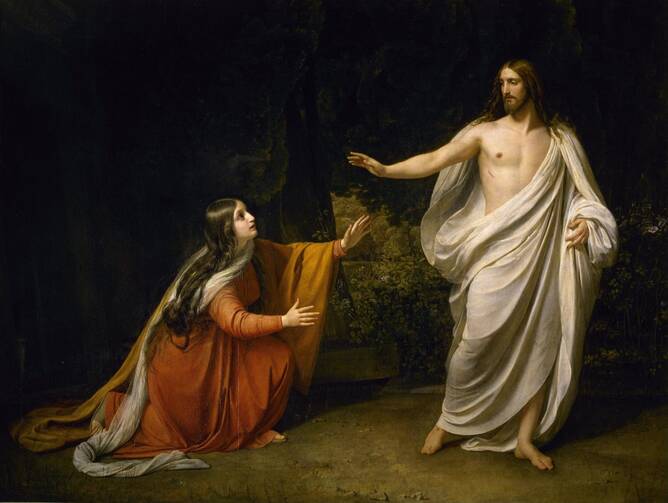 This is "Christ's Appearance to Mary Magdalene After the Resurrection" by the Russian painter Alexander Andreyevich Ivanov. Because Mary's heart has been turned toward Christ through conversion and repentance, she becomes one of his most fervent, faithful disciples. (CNS photo/Wikimedia Commons)

If Christ is preached as raised from the dead,
how can some among you say there is no resurrection of the dead? (1 Cor 15:12)

I don’t know about you, but when someone starts reading a Pauline epistle at Mass, I find it hard not to be lulled into a state of half-consciousness by his repetitions, like in today’s first reading: “If Christ is preached as raised from the dead, how can some among you say there is no resurrection of the dead? If there is no resurrection of the dead, then neither has Christ been raised…For if the dead are not raised, neither has Christ been raised, and if Christ has not been raised, your faith is vain” and so on and so forth.

Maybe it’s the journalist in me, or the kid in me, but I’m much more drawn to stories than to the litanies of systematic “if-then” arguments Paul presents. I have my favorite characters in the Gospels, the ones we get to know through pericope after pericope until they feel like friends of ours, or at least like familiar characters on a long-running TV show. I like to roll my eyes at Peter’s cluelessness, and chuckle when he interrupts the Transfiguration to offer to pitch a tent for the shining Moses and Elijah. (I remember being told that I could remember which disciple Peter is because he was “the one who’s always putting his foot in his mouth.”) By the time we get to the post-Resurrection scene where Peter jumps out of the boat to swim to Jesus on the shore and then affirms, “Lord, you know I love you” three times, we know how powerful a moment it is because we’ve been on the journey with him all along. We know he’s making up for the three denials. And when Jesus tells him, “Feed my sheep,” we’re rooting for Peter to finally get it right, and we believe that, against all odds, he will.

We know Mary Magdalene was an independent woman, with her own money, who chose to spend it traveling with Jesus.

Being so attached to these people and stories, I was of course thrilled when my very favorite figure, Mary Magdalene, showed up in today’s Gospel. She’s only given a brief mention, with the line “from whom seven demons had gone out,” which a now-infamous homily from Pope St. Gregory the Great extrapolated (with no evidence) to mean she had been a sex worker. Much more important, though, is the rest of her story, part of which is also mentioned today: that she and Jesus’ other female followers journeyed with him and the apostles, providing for them out of their resources. We know that she was an independent woman, with her own money, who chose to spend it traveling with Jesus. And we know how deeply they cared for one another. She is there in every story, even at the cross, even at his tomb after he dies. And we know that Jesus loved her so much in return that when he rose from the dead, she was the first one he chose to see. (This is often phrased as Jesus appearing to Mary Magdalene first, but I like to think of it also as Jesus wanting to see her first after literally going through hell and back.) And in turn, Mary Magdalene was the one he trusted to go tell the others the good news.

And here’s where we return to St. Paul, who underscores just how important, how history-defining, that news that Jesus entrusted to Mary Magdalene (and trusted his disciples to believe her, which they did not do at first!). If what Mary Magdalene said was true, that Jesus was back from the dead, then it meant that the miracle of resurrection was not only for him, but for everyone. It meant eternal life in heaven was no longer only the realm of God, but was open to ordinary people. It meant the defeat of death.

Although I prefer to dwell on the story, St. Paul helps us understand why it matters: That this isn’t just an old story in a book; it’s one that is still playing out in real life today.