Pope Francis, Margaret Farley and the church’s teaching on divorce 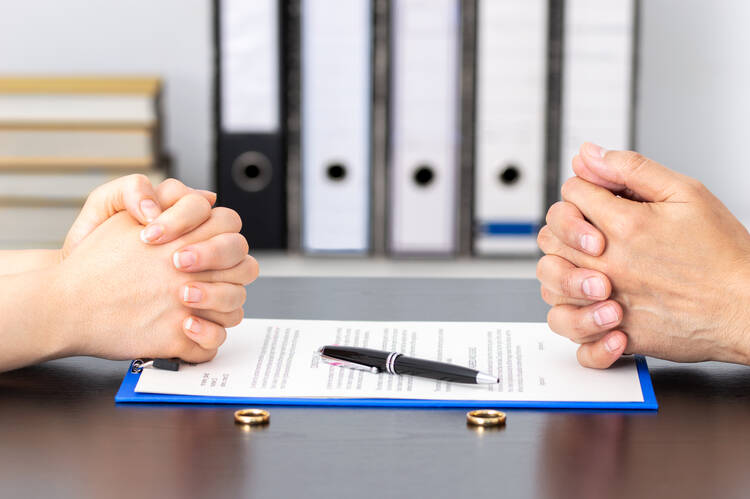 A Reflection for Friday of the Nineteenth Week in Ordinary Time

“Because of the hardness of your hearts Moses allowed you to divorce your wives, but from the beginning it was not so. I say to you, whoever divorces his wife (unless the marriage is unlawful) and marries another commits adultery.” (Mt 19:3-12)

A number of years ago I had the opportunity to work with Margaret Farley, R.S.M., on two books: One was a revised 2013 version of her 1986 classic Personal Commitments, the other a 2015 collection of essays, Changing the Questions: Explorations in Christian Ethics. Sister Farley’s renown as an ethicist is well-deserved, and I learned much about proper discernment and authentic Christian living from these books as well as her 2008 classic, Just Love: A Framework for Christian Sexual Ethics. (The Vatican’s Congregation for the Doctrine of the Faith was not so fond of that one.)

Among the topics she covered in all three was how to understand situations in which an apparently unbreakable covenant had become unsustainable, with the obvious example being marriage. Jesus does not leave much wiggle room in today’s Gospel for such situations—ya dance with the one that brung ya, he seems to say—and yet, Farley contends, a coherent ethics of marriage based in natural law suggests exceptions. What about an abusive marriage, whether physical or emotional? What about a marriage entered into under false pretenses? Why would God doom anyone to a loveless or endangered existence because, well, them’s the rules?

Matthew offers something of an out in today’s Gospel by way of a parenthetical: “(unless the marriage is unlawful).” In Catholic practice that usually means proving the marriage never took place sacramentally because an impediment existed that rendered it null from the beginning. According to your local diocesan annulment tribunal, those impediments may be very few in number; according to Pope Francis, though, they might be rather common. He said in 2016 that “the great majority of sacramental marriages are null,” a quote that was later toned down in the official Vatican transcript but that raised quite a few eyebrows at the time.

Do we hold each other up in holiness if we proof-text the Gospel to convict ourselves and our neighbors?

In “Amoris Laetitia,” Pope Francis upholds the traditional Catholic understanding of marriage but also counsels discernment; just as the Pharisees try to do to Jesus in today’s Gospel, we can unfairly put others to the test when we take “an attitude that would solve everything by applying general rules or deriving undue conclusions from particular theological considerations.”

Do we hold each other up in holiness if we proof-text the Gospel to convict ourselves and our neighbors? Pope Francis recognized “the need for continued open discussion of a number of doctrinal, moral, spiritual, and pastoral questions” around marriage, divorce and remarriage. This is in large part because our adherence to natural law requires that we process the concrete realities in which we exist. And we all interact daily with people in every station in life: married, divorced, widowed, single, in religious life and more.

God and the church give each of us many helps along the way, including the gift of discernment and the ongoing reception of God’s grace, in determining our proper state in life—the one we each take “for the sake of the Kingdom of Heaven.” That is a far more profound task than that of dwelling on what is lawful—and I think Jesus, Pope Francis and Margaret Farley would agree.