What does it mean to say Jesus was fully human and fully divine? Today’s Gospel gives us a clue. 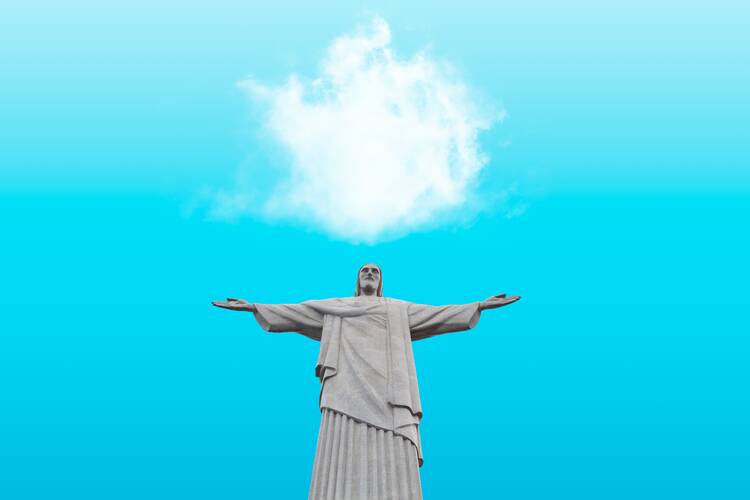 A Reflection for Wednesday of the Eighteenth Week in Ordinary Time

He said in reply,
“It is not right to take the food of the children
and throw it to the dogs.”
She said, “Please, Lord, for even the dogs eat the scraps
that fall from the table of their masters.” (Mt 15:26-27)

Today’s Gospel story always causes controversy. At the very least, it still has the power to surprise. Matthew’s Gospel has Jesus initially turning down a woman who has asked for healing for her daughter. His response is curt: “It is not right to take the food of children and throw it to the dogs.”

New Testament scholars are of several minds about this complex reading. Some say that Jesus’s words should be seen as “playful,” since the word he is using is closer to “puppies.” Others disagree and say no, it means “dogs,” as most translations have it today. As a result, many people find this an alarming episode, with Jesus either calling the woman a dog, her daughter a dog or her people dogs. (She is a “Canaanite” woman here, but a “Syro-Phoenician” in Mark’s earlier version of the story.)

On the other hand, some believe that Jesus is challenging the woman because he knows she will push back. This is more the divine Jesus taking charge. Thus, it is a demonstration for the disciples to show them the value of persistence. But this interpretation angers some people because it implies that Jesus is somehow using the woman as a prop, without concern for her feelings.

It’s part of Jesus’ humanity to see things in a fresh way, and it’s part of his divinity to instinctively know that the woman is right. Then comes the healing.

In response to that argument, some others contend that Jesus knew she was a strong woman, and his blunt words are a sign of his respect for her. As in, “I know that she can handle this.” In this interpretation, she is of greater faith than even the disciples, and he wants them to see this.

Still others say that Jesus is being encouraged to see that his ministry extends beyond the boundaries of the Jewish people. Not only is she a “Canaanite” (a Gentile, or non-Jew), but the story takes place in Gentile territory. But that interpretation, in turn, bothers some people because it implies that Jesus is “learning.” Jesus is fully human and fully divine, and so for some this reading raises a complicated theological question: Did Jesus have a fully human consciousness, and was he therefore only able to know what he was taught? Did he have a fully divine consciousness, and did he therefore know all things at all times? Or was it something in between?

You can see why many scholars call this a “difficult” reading.

For me, their encounter is a human exchange with a divine ending. My sense is that the woman is indeed inviting Jesus to understand his mission in a new way. It’s part of Jesus’ humanity to see things in a fresh way, and it’s part of his divinity to instinctively know that the woman is right. Then comes the healing.

What happens to this important woman in the Gospels? What happened to the woman who was praised by Jesus for her “great faith”? We do not know. What we do know is that Jesus encountered her, listened to her, had compassion on her, was willing to open his mind to her and healed her.

It may be a “difficult” reading, but is there one that shows both his human and divine natures so clearly?