For the first time ever, Pope Francis appoints three women to the Vatican office that selects bishops 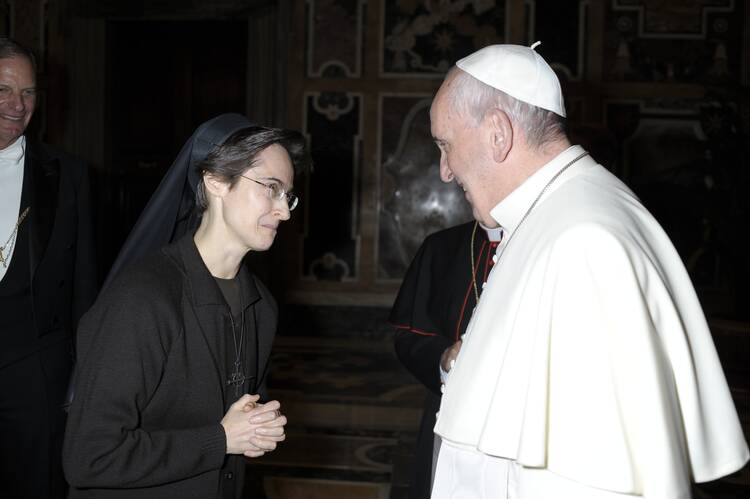 Pope Francis greets Sister Raffaella Petrini, an Italian member of the U.S.-based Franciscan Sisters of the Eucharist, at the Vatican Dec. 3, 2015. The pope has named Sister Petrini to be secretary-general of the office governing Vatican City State. (CNS photo/Vatican Media)

Continuing with determination to open up new positions of responsibility for women in the Roman Curia, Pope Francis has appointed three women as members of the Dicastery for Bishops, the Vatican announced today. It is the first time ever that women have been given this role.

The first of the three is the Italian Raffaella Petrini, F.S.E., a member of the Franciscan Sisters of the Eucharist. She has been the highest-ranking woman in the Vatican since Francis appointed her as Secretary General of the Governorate of the Vatican City State in 2021. A former university professor and official at the Dicastery for the Evangelization of Peoples, Sister Petrini holds a doctorate in social science, a master’s degree of science in organizational behavior and a degree in political science.

The second woman to be appointed is a French-born woman religious, Yvonne Reungoat, F.M.A. She holds degrees in history and geography and in 2008 was elected as the first non-Italian superior general of the Daughters of Mary Help of Christians, the women’s branch of the Salesians. In 2018, Sister Reungoat was elected as president of the Union of Major Superiors of Italy, and the following year, Pope Francis appointed her as one of the first seven women members of the Dicastery for Institutes of Consecrated Life and Societies of Apostolic Life. Today, the pope has given her an even more important role by designating her as a member of the Dicastery for Bishops.

Pope Francis has appointed three women as members of the Dicastery for Bishops, the Vatican announced today. It is the first time ever that women have been given this role.

The third woman is Argentinian-born Maria Lia Zervino, the president of the World Union of Catholic Women’s Organizations and a member of the Association of Consecrated Servant Virgins (Asociación de Vírgenes Consagradas Servidoras) that was founded in Buenos Aires. Francis has known her since he was archbishop of Buenos Aires, and last year, she wrote an open letter to him to thank him for all he has done for the church since becoming pope, but also appealing to him to give more space and a greater role to women in the church.

These three highly qualified and dynamic women will join some 30 cardinals and bishops for regular meetings at the Vatican, roughly every two weeks, to select, vote upon and present to the pope the names of the persons they consider as the most suitable candidates to be bishops in Europe, North and South America, Oceania and several countries in Asia.

The bishops appointed to the dicastery include Dražen Kutleša (Croatia), Paul Desmond Tighe, (Ireland and the Vatican) and Donato Ogliari, O.S.B. (Abbot of St Paul outside the Walls, Rome, Italy).

The three women and eleven clerics will join the other members of the dicastery whom Pope Francis has already confirmed to this board for another five-year term. Among them are two cardinals from the United States: Blase Cupich of Chicago and Joseph Tobin of Newark.