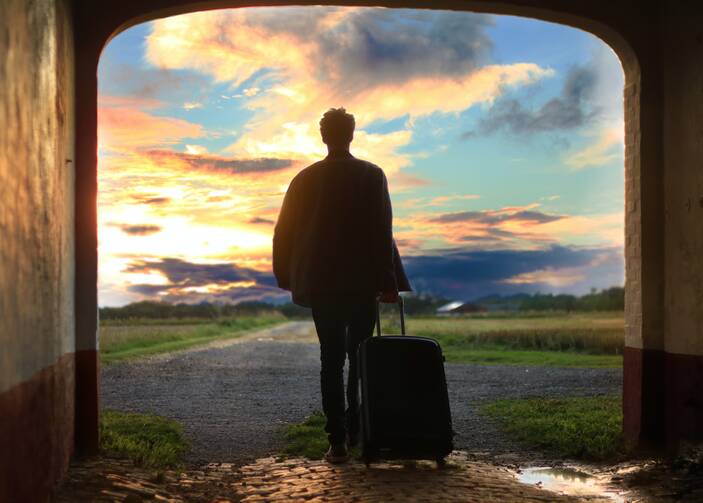 “As you enter a house, wish it peace. If the house is worthy,
let your peace come upon it.”

In the spring of 2003, the novice master gave the ten of us novices a small amount of money and a one-way bus ticket and sent us on a pilgrimage. He told us to come back to Saint Paul in a month.

One of the men, a broad-shouldered Canadian named Dan Kelly, discerned that he was called not to go to the desert to commune with chanting monks, or serve complicated soup in some sad homeless shelter. He felt drawn to return home to Canada to reconnect with family and friends. When he was there visiting relatives, Dan was invited to go to an NHL game. He gladly and gratefully went. It was not something he would have many chances to do. Even in 2003, ticket prices were steep, scaling anywhere from $35 to nearly $200.

Later Dan was invited by someone else to another NHL game. He took a few moments to discern whether on this austere godly pilgrimage he should make use of another ticket to another expensive ice-bound athletic tussle. Maybe it was just too extravagant. Then he remembered a story about St. Francis Xavier standing on the prow of a ship in a blistering storm, calling out, “Even more Lord, even more!” Dan went to the game.

In today’s passage from the Gospel of Matthew, Jesus commands his disciples to “wish peace” to houses they enter. The Jerome Biblical Commentary describes this wishing of peace as more than just a generalized greeting. It is “a wish that all may be well with the person greeted.” You get the sense that it is a thorough sending of one’s energy, one’s very being and spirit, into someone else, to affect the totality of them.

The pilgrimage we went on pretty much reversed the order of “peace wishing,” as well as the very notion of traditional missionary work. The ten of us were sent out not necessarily to proclaim the kingdom, cure the sick, cleanse the lepers or to exhale the depths of our peace upon others. We were missioned more or less to trust God.

Our assignment was to actually believe that we would be taken care of by the people we met. That the sicknesses and leprosies inflicted on us over the course of our lives—doubt, alienation, internal chaos, fear disguised as arrogance—that these things might be treated and healed just a bit more by the people of God.

Instead of looking for people worthy of his time, other people judged that Dan was worthy of their time. He was preached to with extravagant gifts (free professional hockey for a Canadian—what costly nard could be more precious?). Dan received the peace of others. He gave people the chance to be good to him, which may have been the best way to be a missionary to them.