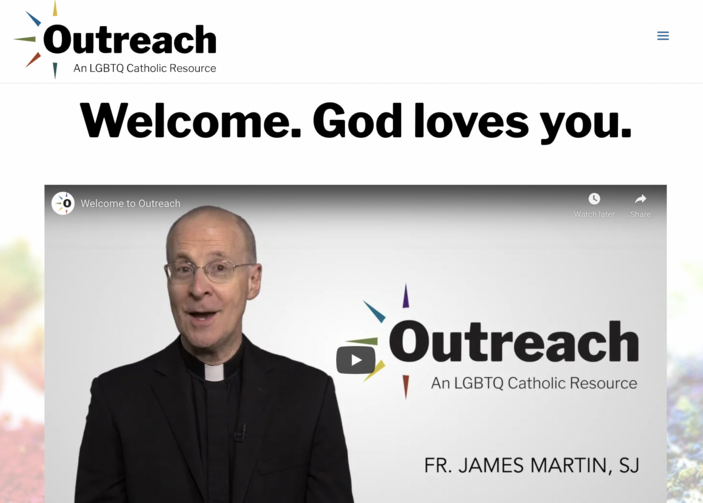 James Martin, S.J., has been serving the marginalized ever since he joined the Society of Jesus. He has worked with street gangs, the sick and dying, refugees in East Africa and prison inmates and people experiencing homelessness.

“So the L.G.B.T. work just sort of made sense,” Father Martin, editor at large for America, said in a recent interview. “One of the universal apostolic preferences of the Jesuits now is walking with the excluded…. Jesus went to the margins. That’s where this community is right now in the church. They’re the most marginalized group in the church bar none.”

That mission to reach the marginalized L.G.B.T. community led Father Martin and his collaborators to launch a new website, outreach.faith, on May 1. The site, which operates under the auspices of America Media, will include news and essays as well as helpful resources like videos, books and links to welcoming organizations. The website will also feature the Gaudete series, which will profile parishes across the United States that are welcoming to L.G.B.T. Catholics. Michael O’Loughlin, America’s national correspondent and author of Hidden Mercy, will be a contributor.

“One of the universal apostolic preferences of the Jesuits now is walking with the excluded…. Jesus went to the margins. That’s where this community is right now in the church.”

“By hosting Outreach as a channel within America Media, we are able to provide a secure and accessible home for this important new ministry,” said Matt Malone, S.J., president and editor in chief of America Media.

The website itself grew out of the annual Outreach conference, which has been hosted virtually since it began in 2020. The Outreach website will host videos from the conference and bring together resources in multiple languages—including Spanish, French, German, Lithuanian and Hungarian, among others—to serve Catholics around the world.

“Just this week, I was speaking with a person whose son came out at age 30,” Father Martin said. “And it was difficult for him. We think that now it’s easy, but it’s still difficult. It’s even more difficult to find a place in the church, which is one of the reasons for this website. To really help people find a place where they feel welcomed. I hope this website reaches out to the margins and brings them to the center.”

Whether one feels welcomed in the Catholic Church often depends on where a person lives, a reality Father Martin called scandalous. “I hope the website is a place for people to find support when they can’t find it elsewhere,” he said. “It can be a place for them to know that there are people in the church who welcome them and will treat them with respect, compassion and sensitivity, as the Catechism asks us to do.”

”I hope this website reaches out to the margins and brings them to the center.”

Mark McDermott spent more than 30 years as a corporate lawyer on Wall Street and is one of several donors who, along with several foundations, are making the site possible. He will be primarily responsible for writing and producing the Gaudete series. He left his practice earlier this year, in large part, to dedicate his life to work that supports L.G.B.T. Catholics.

“I’m one of those people who had a long journey through a pretty dark and thorny path. I’m 55, and didn’t really come out to my family until I was 47,” Mr. McDermott told America. “I’m very happily married now and could not be luckier. But it’s only with the benefit of some hindsight that I realized what a wicked journey that was. I wouldn’t wish it on anybody. And I want any resource brought to bear to help anybody who’re on that path, especially young people, find their way out of it.”

The Outreach website, he said, is not meant to supplant the numerous organizations that support the L.G.B.T. community. “We want to be a centralized resource for everybody,” he said, adding that some groups have names that may not immediately be recognized as L.G.B.T.-friendly. “If people could become aware of one another and reach out and talk to one another, that’s a good thing.”

“Jesus loves us all. Everybody,” he said. “Jesus loves everybody. It took me maybe 40 years to come back to that.”

Mr. McDermott was an altar server when he was a child in Iowa. One message he learned in faith formation classes stuck with him.

“Jesus loves us all. Everybody,” he said. “Jesus loves everybody. It took me maybe 40 years to come back to that.”

He hopes the Outreach website will be a conduit of that message.

“I believe that no life is truly authentic unless it is oriented somehow toward the divine. And I really believe all human beings are hardwired for that, whether they realize it or not, whether they want to admit it or not,” he said.

“That is what that inexplicable, maddening yearning is that we all feel for something we can’t describe,” he continued. “It is a travesty that so many L.G.B.T. people feel cut off from that.”

Through the website and the community it forms, Mr. McDermott hopes members of the L.G.B.T. community will have a new experience of faith.

“The God we believe in became human. And not just any human, but a nobody from nowhere. And he died an ugly, nobody death, you know?” he said. “If that isn’t hanging out with the lowly and the marginalized, I don’t know what is. To have done that as an expression of love is [an idea] you have to force yourself to come back to.”