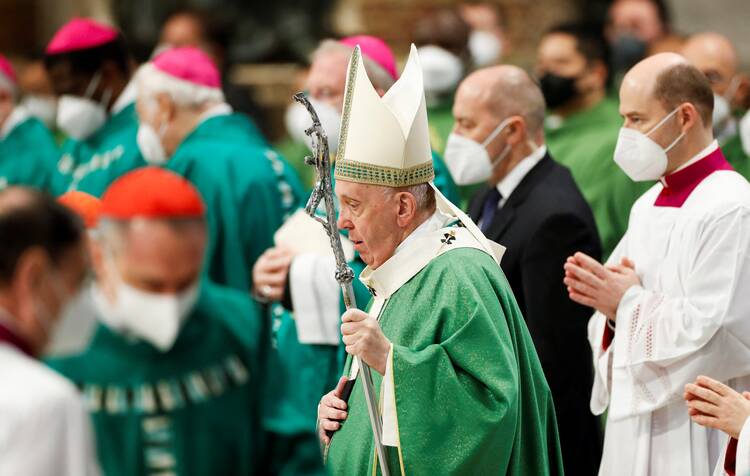 Pope Francis arrives to celebrate Mass marking Sunday of the Word of God in St. Peter's Basilica at the Vatican on Jan. 23, 2022. (CNS photo/Remo Casilli, Reuters)

Only a year ago, Pope Francis had opened the role of catechist to women. In most countries, women and men have long served as lectors and catechists and even have been commissioned for those roles. But those formally installed in the ministries are recognized as having a specific vocation to leadership in their communities and will serve in what the church defines as a “stable” manner.

Pope Francis installed six women in the ministry of lector, telling them they were placing themselves “in the service of the faith, which is rooted in the word of God.”

Pope Francis installed six women—from South Korea, Pakistan, Ghana and Italy—and two Italian men in the ministry of lector, telling them they were placing themselves “in the service of the faith, which is rooted in the word of God.”

Three women from Spain, Brazil and Ghana and five men from Italy, Peru, Brazil and Poland, were installed as catechists. Pope Francis told them they were called “to live more intensely the apostolic spirit, following the example of those men and women who helped Paul and the other apostles to spread the Gospel.”

Pope Francis gave each of the lectors a Bible and the catechists a crucifix modeled after the crucifix on the crosier regularly used by St. Paul VI and St. John Paul II.

In his homily, the pope said the 16 lectors and catechists “are called to the important work of serving the Gospel of Jesus, of proclaiming him, so that his consolation, his joy and his liberation can reach everyone.” But, the pope said, “that is also the mission of each one of us: to be credible messengers, prophets of God’s word in the world.”

For that to happen, he said, Christians must devote themselves to reading the Bible, digging “deep within the word that reveals God’s newness and leads us tirelessly to love others.”

“Let us put the word of God at the center of the church’s life and pastoral activity,” Pope Francis said.