What should the U.S. bishops debate next? Here’s a list of topics that no one asked for 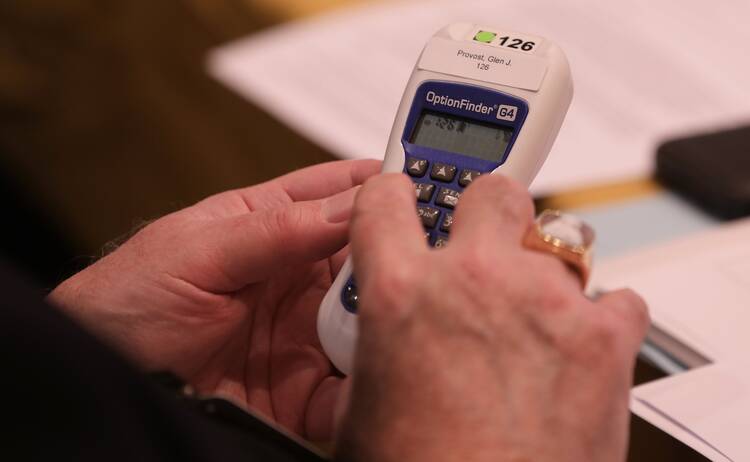 At the recently-concluded meeting of the U.S. Catholic bishops, one participant realizes that if he turns his voting gizmo upside down, he can type “37818” and spell “BIBLE.” (CNS photo/Bob Roller)

Bishops of the United States: You truly did yeoperson’s work at your annual fall meeting, addressing with grace any number of sticky Catholic wickets. We are GRATEFUL. There are, however, several other pressing and frankly, deeply troublesome church matters we fear may go unaddressed. As loyal sons and daughters of Mother church, we humbly ask you to add these matters, with alacrity and diligence, to the agenda for the spring:

To lead off, we would like a clear and resounding statement to the church secretaries of the United States (a notoriously stubborn lot, to be sure) limiting the number of disheartening funeral home ads on the backs of church bulletins.

Why does it require six forms, two signatures and two information sessions for a fella to be a confirmation sponsor for his niece, but there’s an honest-to-God casino in the parish hall on Thursday nights?

We’re reciting “Hail Holy Queen” before and after Mass around here. We demand coherence on this question: Is it “vale of tears” or “valley of tears”?

Can you instruct your pastors to remove the red and green lights over church confessionals telling us when the booth is free (green) or hosting some other poor penitent (red)? Catholics nationwide sitting in their cars at traffic lights are constantly breaking out into cold sweats of dread once the light turns green. It’s awful.

Please allow parishes to have, like, four Christmas Eve “Children’s Masses,” which is the one everyone wants to go to anyway.

You know those stickers in the pews at St. Patrick’s Cathedral with the QR codes you can scan with your phone to donate money? Why doesn’t that also tell us when the crosstown bus is coming? We wouldn’t leave right after Communion, we swear.

Let’s not kid ourselves. You really cannot pray in a carpeted church.

It’s 2021. Should Dad still be able to buy beer at the CYO basketball game?

Promulgate a mandate to the Sacred Heart Architect League (or whoever) that all new chapels and churches must have wood or tiled floors. Let’s not kid ourselves. You really cannot pray in a carpeted church.

We would like a return to placing the title “Cardinal” back to the middle of a Cardinal’s name. It’s just way cooler, right? The flavor and allure of gleaming sports stars. Dick “Night Train” Lane. Clyde “The Glide” Drexler. Maurice “Rocket” Richard. John “Cardinal” O’Connor. Ernesto “Cardenal” Martinez. Totally sweet.

Is the confessional booth really the best place to store all those music stands?

In addition to the red or green lights, the sacrament of reconciliation is a bit out of favor these days for a lot of reasons. But is the confessional booth really the best place to store all those music stands?

When on the Feast of St. Francis, we have the “Blessings of the Animals”: Please give a “strong pastoral suggestion” against cats being blessed. Cats do not need to be blessed, do not want to be blessed, hate being blessed. Anywhere. At any time. It is utterly beneath them. Please spare them this indignity. (Dogs, on the other hand, have been known to sneak back in line three or four times.)

Can we have an interdict placed on that guy who seems like he really wants to welcome us to our new parish but a week later is trying to sell us life insurance?

Some priests and bishops get a Doctorate in Sacred Theology, known shorthand by its initials. This means every so often you’ve got a priest who wants to establish his ecclesial cred going around proudly telling people he has...an STD.

Cats do not need to be blessed, do not want to be blessed, hate being blessed. Anywhere. At any time. It is utterly beneath them. Please spare them this indignity.

We are not making this up. We can fix this one, then, bishops? We can simply change those initials around, right? DST? TDS? Let’s get that done.

One of us had a childhood pastor, Father Eugene Kerwin, who used to come out of the sacristy about five minutes before Mass and, in the voice of God (if not God, then God’s older, angrier brother), read the parish announcements. This is the right time to tell people about the Sons of Italy Spaghetti Feed. Before, not during, Mass. Imagine going to a production of “Hamlet” where, right before Horatio declares “Good night, sweet prince,” the actors stop the show and tell everyone it’s dollar draw night at McSorley’s. Exhort your priests to make it so the play goes uninterrupted, start to finish. People can read about church events and find quality mortuaries in the bulletin.

Why does it require six forms, two signatures and two information sessions for a fella to be a confirmation sponsor for his niece, but there’s an honest-to-God casino in the parish hall on Thursday nights? Let’s do a draft document on that one.

Some priests and bishops get a Doctorate in Sacred Theology, known shorthand by its initials. So you’ve got a priest who wants to establish his ecclesial cred by telling people he has...an STD.

Might you indulge the residents of the dioceses of Nebraska and please stop talking about the “preferential option for the poor”? It’s not that they hate poor people, mind you. The word “option” in those environs means only one thing: Turner Gill, Tommie Frazier or any number of Husker quarterbacks rolling right and either pitching to the I-Back or running the ball themselves. When we hear “option for the poor,” we’re like, “Thapour? Oh, yeah, great I-Back, wasn’t he second-team All-Big Eight in ’92?”

In that same vein, can you bring back the rhetoric of the “seamless garment”? We think of it fondly every time we order some late-night delivery.

And getting back to sports: What if we ranked our evangelizing efforts the way ESPN breaks down an athlete’s stats? Bet you’re all dying to see who gets the most third-down conversions.

All prelates should encourage fist bumps at the sign of peace. No twinned finger signals, no handshakes, no waves. Fist bumps. For the scandalized, you can quietly inform them it was common practice in the catacombs.

Last but definitely not least, you should all get together and suppress the Jesuits again, which will transform those rascal sons of Loyola into the glorious old-timey martyrs they are all striving to be, but without any of that inconvenient, like, dying.