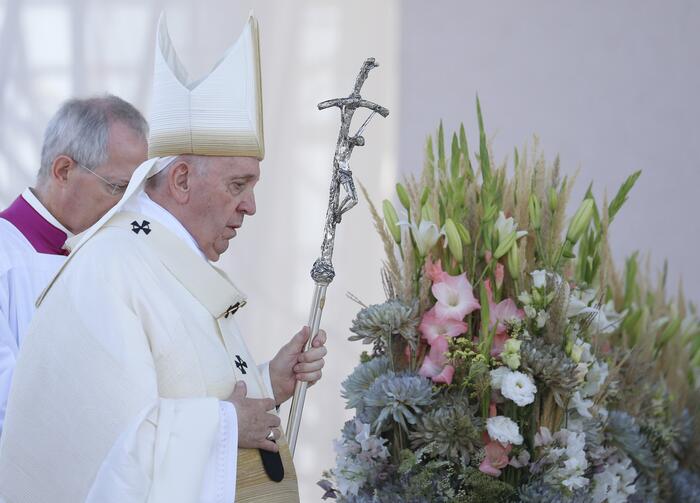 Pope Francis arrives in procession to celebrate Mass on the fields outside the Basilica of Our Lady of Seven Sorrows in Šaštin, Slovakia, Sept. 15, 2021. The pope's Sept. 12-15 visit to Slovakia and Budapest, while seemingly low-key, waded into issues that have divided the world and the Catholic Church. (CNS photo/Paul Haring)

While he was in Slovakia, Pope Francis was recently asked: “How do you deal with people who look at you with suspicion?”

“There is, for example, a large Catholic television channel that has no hesitation in continually speaking ill of the pope. I personally deserve attacks and insults because I am a sinner, but the Church does not deserve them. They are the work of the devil. I have also said this to some of them.”

Some papal critics see Francis’ response as a cause for celebration. Viewing themselves as the gatekeepers of orthodoxy, they received his critique not as an indictment but as a badge of honor. These critics believe the channel—which many assume to be EWTN—must continue on the course the Holy Father denounced.

Meanwhile some papal supporters feel a sense of schadenfreude at seeing the pope’s critics called out. They perceive elements of the channel as a standard bearer for racist, sexist and politically partisan ideologies. To them, the Holy Father snatched the cloak of orthodoxy from a pious fraud.

Some papal supporters feel a sense of schadenfreude at seeing the pope’s critics called out.

I, however, felt dread when I read the Holy Father’s words. Even though I was formerly affiliated with EWTN, I did not consider his warning as limited to any one outlet nor to any one Catholic commentator. I felt as if he had spoken directly to me. It was both a correction and an invitation.

It is terrible to cooperate with the devil. Every person with any influence whatsoever must pause and seriously consider how they have spoken about the Vicar of Jesus Christ. Do our words foment hatred and mistrust for the Chief Shepherd of the Catholic Church? Can we throw mud on the Vicar of Christ and expect the Bride of Christ not to catch any of the splatter?

Speaking ill of the papal office harms the Church. The Holy Father is not a random dude from Anytown, USA. Pope Francis, Successor to the Prince of the Apostles, is the chief guardian of the Catholic faith.

To underscore who the Pope is and why we should take heed, recall Jesus’ words in Matthew 16: 18-19:

“And so I say to you, you are Peter, and upon this rock I will build my church, and the gates of the netherworld shall not prevail against it.

Can we throw mud on the Vicar of Christ and expect the Bride of Christ not to catch any of the splatter?

The authority given to Peter by Jesus flows to St. Peter’s successors, including St. John Paul II, Pope Benedict XVI and Pope Francis.

What reaction should we have to the Holy Father’s admonitions? I believe we should carefully examine ourselves. Catholic media should not imperil souls. I do not want to imperil my soul or that of anyone else.

The Holy Father’s warning is also an invitation to reject the works of the devil. His words are reflective of his ministry to care for souls. His words are a reminder of the renewal of our baptismal promises.

What reaction should we have to the Holy Father’s admonitions? I believe we should carefully examine ourselves. Catholic media should not imperil souls.

This week on The Gloria Purvis Podcast, I speak with Father Aquinas Guilbeau OP to explore the Holy Father’s words. How can we critique the Holy Father without doing the devil’s bidding? What kind of obedience do the laity owe the Holy Father? Can we be Catholic and reject the authority of this Pope? Is he revising doctrine and leading us into heresy? What are the conditions for offering fraternal correction?

Some commentary around this story has led to further division within the Church. This conversation is meant to guide us away from doing the work of the devil.