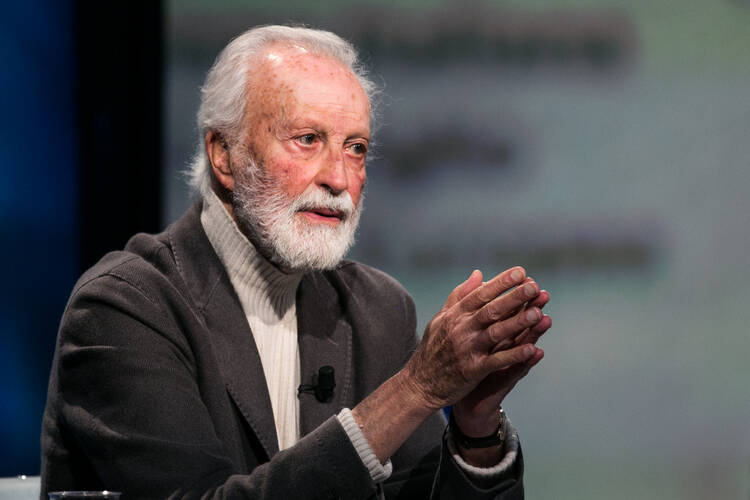 The 96-year old Mr. Scalfari, an atheist, broke the news in an article on La Repubblica, Aug. 2, under the headline “Pope Francis and the modern society.” In it, he recalled that they have met many times over the years since Francis was elected pope on March 13, 2013 and have exchanged correspondence over the years since then. “We are truly friends,” he states, and reports that at this new meeting “we could not but embrace physically and mentally.”

The only reports of Mr. Scalfari’s long conversations with Francis have come from the elderly journalist, who does not record or take notes.

This time, he said, they spoke first about modern society, which began with the period of the Enlightenment, and how the church has to come to terms with the changes in society, as the Second Vatican Council (1962-65) made clear. He said Francis told him that the church has not yet fully implemented that council, and saw his own task as continuing that work.

In actual fact, the only reports of Mr. Scalfari’s usually long conversations with Francis have come from the elderly Italian journalist, who does not record or take any notes during their private, face-to-face meetings, and in the past his write-ups from memory have often given rise to controversy. The Vatican has sought to avoid commenting on these “private conversations,” except when it has had to correct some of Mr. Scalfari’s alleged quotes from Francis that have raised serious theological questions, such as one that suggested the pope denied the existence of hell. Scalfari later admitted that some words attributed to the pontiff “were not shared by Pope Francis” himself.

This time, however, there is nothing particularly controversial in his report about what the pope said, as the main part of the article reflects more or less faithfully what Francis wrote in his 2015 encyclical, “Laudato Si’,” and the ecological crisis, including climate change, that is threatening the future of humanity, and the fact that so many people are living in poverty across the globe.

In today’s article, Mr.Scalfari said they commented on “the ageing of the sun”—something discovered by scientists—and discussed especially the duty of people to use responsibly the goods of the earth and to recognize and respect every person and all living creatures. He reported that he and the pope “agreed” that there cannot be “a genuine and lasting solution to the challenge of the ecological crisis and climate change unless it is a joint and collective response, and a shared responsibility.”

Quoting from memory, he said Pope Francis told him, “let us remember the places that are full of bio-diversity—the Amazon and Congo basin rainforests with their great aquifers, and the great importance of these for the entire planet and for the future of humanity.” He recalled that the pope spoke of how the oceans and rivers are changing, and said “the technicians [scientists] are concerned about them, but politics [the political world] is focused on other problems.” He quoted Francis as saying that “all the Christian communities have an important role to play in educating people about this.”

He concluded by saying that he promised the pope that he would do what he could to help him in this task.