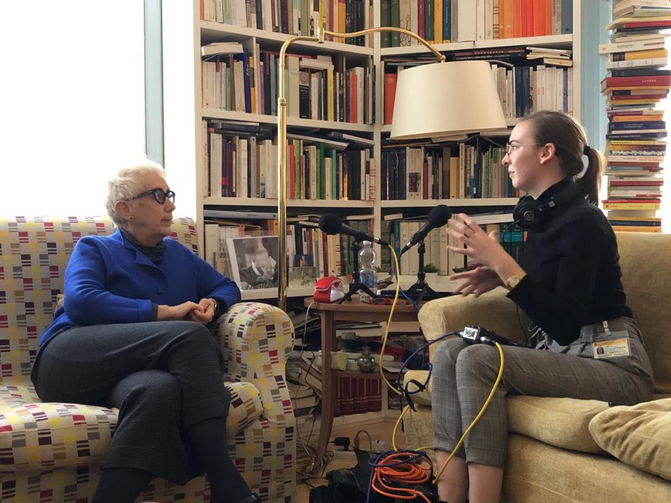 Gerard O'Connell is out this week, so instead of following our usual format for the "Inside the Vatican" podcast, we’re breaking out of the weekly news cycle to bring you an interview about a slow change that’s beginning for some really important people in the Vatican: Women.

Lucetta Scaraffia is the editor of Women Church World, the monthly magazine that comes as an insert in the Osservatore Romano, the Vatican's newspaper. Gerry and I met Lucetta when I was in Rome for the abuse summit. Since Lucetta doesn’t speak English and I don’t speak Italian, we chatted in French, our only common language. You’ll be hearing a dubbed version of our conversation on the podcast.

Lucetta and I talked about the changes to the situation of women working in the Vatican and where she sees signs of hope. Lucetta is not advocating for women’s ordination to the priesthood, but she has proposed making women cardinals. Lucetta also noted that because women are often ignored in Vatican power circles, the lack of strict oversight has allowed them to propose some creative solutions to address the underrepresentation of women.

As I promised in the podcast, if you want to learn more about voting at the synods and women's involvement, check out the links below, specifically: "Why can't women vote at the Synod on Young People?"

LOL. Well, this is great! For for the 18th Century.

How things are changing for women in the Vatican? They aren't! Thanks for the news!

Any woman who promotes treating and ordaining women less or differently than men is her own enemy and the enemy of all women and men even. Women are equally called to priesthood and sexism is always hate. Sexism is extremely evil and as sinful as racism. It always has been and it always will be and we will keep all the side effects of this hatred alive in our church until we are fully rid of the demon sexism from our laws, traditions, liturgies and sacraments period. Those evils include pedophilia and child abuse and teen abuse. So remember when you say we are not ready for women to be treated equally human and with justice that this statement means you are also not ready to end sexual child abuse in our church. The two demons walk hand in hand and you can't get rid of one while you cling to the other. Our hierarchy child sex abuse tragedy, that is ongoing, is absolute proof of this statement's validity.

Advertisement
More: Inside the Vatican