In his World Day of Peace message, Pope Francis focuses on “good politics ” 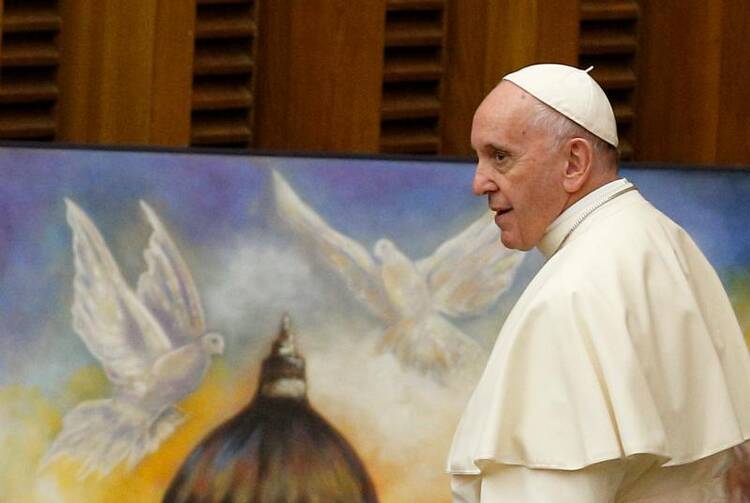 Pope Francis during his general audience in Paul VI hall at the Vatican on Aug. 8. (CNS photo/Paul Haring)

In his message for the World Day of Peace that will be celebrated in Catholic churches worldwide on New Year’s Day, Pope Francis focused on “good politics.” The text, which was presented by Cardinal Peter Turkson at a Vatican press conference today, Dec. 18, is being sent by the Secretariat of State through the papal nuncios to all heads of state across the world, as well as to the heads of international institutions.

While emphasizing that politics is “at the service of peace” and “respects and promotes fundamental human rights, which are at the same time mutual obligations,” the pope highlighted the fact that “the thirst for power at any price leads to abuses and injustice.”

Pope Francis is deeply concerned about the growing threat to peace in today’s world, which he sees as engaged in “a third world war, piecemeal.” In his 2,000-word message, he called politics “an essential means of building human community and institutions” and a noble profession. At the same time, he warned that “when political life is not seen as a form of service to society as a whole, it can become a means of oppression, marginalization and destruction.”

Pope Francis is deeply concerned about the growing threat to peace in today’s world, which he sees as engaged in “a third world war, piecemeal.”

His message is the 52nd annual message for the World Day of Peace since St. Paul VI began the tradition more than half a century ago. As is customary, it is being sent not only to persons with political responsibility at the national and international levels but also to bishops worldwide. The text is meant to be studied in dioceses and parishes to help educate the Catholic faithful in the ways of peace.

Pope Francis warned against the vices that are too often linked to politics today and do not build peace in society. He lists several sins that permeate political life in many countries, including corruption, which includes “the misappropriation of public resources, the exploitation of individuals, the denial of rights, the flouting of community rules, dishonest gain, the justification of power by force or the arbitrary appeal to raison d’état and the refusal to relinquish power.” Other vices he listed included xenophobia, racism, lack of concern for the natural environment, the plundering of natural resources for the sake of quick profit and “contempt for those forced into exile.”

Recalling the end of World War I a century ago, Pope Francis restated a constant refrain: “no to war and to the strategy of fear.”

Pope Francis also offered a reminder that “bringing peace is central to the mission of Christ’s disciples. That peace is offered to all those men and women who long for peace amid the tragedies and violence that mark human history.” He warned, however, that “when the exercise of political power aims only at protecting the interests of a few privileged individuals, the future is compromised and young people can be tempted to lose confidence, since they are relegated to the margins of society without the possibility of helping to build the future.”

Pope Francis acknowledged that “human relations are complex, especially in our own times, marked by a climate of mistrust rooted in the fear of others or of strangers, or anxiety about one’s personal security.” Such attitudes are also present at the political level, “in attitudes of rejection or forms of nationalism that call into question the fraternity of which our globalized world has such great need,” whereas what societies need more than ever are “artisans of peace.”

Recalling the end of World War I a century ago, Pope Francis restated a constant refrain: “no to war and to the strategy of fear.” He declared, moreover, that “an escalation of intimidation, and the uncontrolled proliferation of arms, is contrary to morality and the search for true peace.”

Terror exerted over those who are most vulnerable, he stated, “contributes to the exile of entire populations who seek a place of peace.” He cited a striking statistic that “one out of every six children in our world is affected by the violence of war or its effects, even when they are not enrolled as child soldiers or held hostage by armed groups.”

He concluded his message by identifying three inseparable aspects of peace: first, “peace with oneself, rejecting inflexibility, anger and impatience”; second, “peace with others: family members, friends, strangers, the poor and the suffering, being unafraid to encounter them and listen to what they have to say”; and, third, “peace with all creation, rediscovering the grandeur of God’s gift and our individual and shared responsibility as inhabitants of this world, citizens and builders of the future.”

[Want to discuss U.S. politics with other America readers? Join our Facebook discussion group, moderated by America’s writers and editors.]

“human relations are complex, especially in our own times, marked by a climate of mistrust rooted in the fear of others or of strangers, or anxiety about one’s personal security.” -- Sadly this is true. Worse yet there are politicians in America in power and other countries who use and manipulate the 'fear of other' to drive divisive, angry, hateful, ruinous politics and policies that intentionally target the vulnerable.

Earlier this month Pope Francis stated that the 19 Roman Catholic clerics and nuns who were killed by Islamists in 1996 “are a testament to God’s plan of love and peaceful coexistence between Christians and Muslims,” Nearly all of them were were citizens of France.

So, Muslims murder 19 French Christians, and Francis says these victims are a "testament to God's plan of peaceful coexistence between Christians and Muslims?" Pope Francis repeatedly makes comments like this that seem way off the mark.