What life is like as a Catholic military chaplain 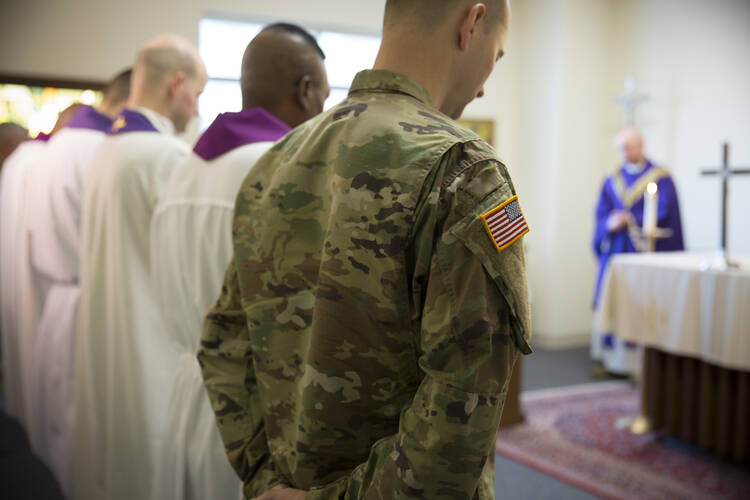 New Army chaplains attend a morning Mass in a small chapel at Fort Jackson in Columbia, S.C., where they are training at the U.S. Army's Chaplain Basic Officer Leader Course. (CNS photo/Chaz Muth)

Thomas Craughwell is a lay Catholic writer, author and speaker. His books include 101 Places to Pray Before You Die: A Roamin' Catholic's Guide (2017, Franciscan Media) and Saints Behaving Badly: The Cutthroats, Crooks, Trollops, Con Men, and Devil-Worshippers Who Became Saints (2006, Crown). Mr. Craughwell’s newest book, Heroic Catholic Chaplains,was released in June. I recently interviewed him about this work.

Your new books includes Jesuit Fathers Anthony Rey and John McElroy, the first fully functioning Catholic chaplains to U.S. forces, who accompanied American troops during the invasion of Mexico in 1845. What can you tell us about Father McElroy?

Father McElroy had a bit of a cantankerous streak. He had never been to Mexico, and once he got there he didn’t like it. He didn’t like the Mexican people, which was just as well since he made no effort to pick up a little Spanish. And he insisted that none of the churches in Monterey were a suitable a place for him to say Mass.

A new book by Thomas Craughwell looks at Catholic priests who served in the armed forces.

You also mention in the book that Father Rey was the first Catholic chaplain killed by the enemy. What did you learn about Father Rey and his death in your research?

Father Rey was much more accommodating than his colleague. He had studied Spanish before he left for Mexico, and it improved once he got there. Outside [one] city was a cluster of huts inhabited by bandits, robbers and other men and women of less than stellar character. Father Rey began to visit them, and if he didn’t manage to get them into a confessional, at least he earned their respect and even their friendship.

Father Rey set out on some errand accompanied by one young Irishman as an escort. They traveled into dangerous territory, an area where a detachment of Mexican troops was conducting a guerrilla war against the Americans. Father Rey and his assistant were both killed. Rey was buried in Mexico, but we don’t know where.

Your book also tells the story of Father Emil Kapaun, a sainthood candidate from Kansas who died in a Chinese prisoner-of-war camp after the 1950 Battle of Unsan during the Korean War, eventually receiving the Medal of Honor posthumously from President Obama. What struck you about his story?

He was genuinely holy, genuinely cared about the men imprisoned with him. But he had a colorful side. Young soldiers especially loved that sometimes Kapaun’s language would get a little salty.

They were starving in the camp, so at night Father Kapaun and two of his close friends would slip out of the barracks. Once, while a guy started an argument with the guards as a distraction, Father Kapaun and his other friend went into the guards’ supply shed and took as much food as they could carry. Before he went out on these raids, Father Kapaun always prayed to St. Dismas.

“The safest place for me to be is in the center of God's will, and if that is in the line of fire, that is where I will be.”

You cover many historical figures like Father Peter Whelan, imprisoned with Union soldiers at Andersonville, Georgia, during the Civil War, and Father Francis P. Duffy, who accompanied the American Expeditionary Force in WWI. Can you tell us about a chaplain from our own times?

Father Timothy Vakoc was a priest of the Archdiocese of St. Paul and Minneapolis. In 2004, he was sent to Iraq. Understandably, his family was worried. So he wrote to his sister, “The safest place for me to be is in the center of God's will, and if that is in the line of fire, that is where I will be.” He was going back to the base after saying Mass when the vehicle he was traveling in struck an improvised explosive device. Father Vakoc was seriously injured, including severe neurological damage. He was taken back home to the U.S. for treatment, but he never improved much. He died in 2009.

What common themes did you notice in the stories of the Catholic chaplains you covered?

They were fearless. They ran about battlefields in full sight of the enemy, dragging wounded men to safety, and consoling, anointing and absolving the dying. It is remarkable how many of them received multiple awards for valor under fire. And their commitment to making sure men in harm’s way had access to the Mass and the sacraments is truly heroic. Camping out with an army, especially in the 19th century, could not have been fun. But these priests went.

The Chaplain's Dilemma: Can pastors in the military serve God and government?
Tom Cornell

Showing God's Face on the Battlefield: A chaplain explains why he served.
John J. McLain

What surprises will readers find in this book?

That the first time general absolution was granted to American troops was at Gettysburg, by the chaplain of the Irish Brigade, Father William Corby. He left a cozy faculty position at the University of Notre Dame to serve as a chaplain for four years. Then there are all the chaplains who survived the Bataan Death March. On the other side of the world, an Air Force chaplain parachuted with his men into Normandy on D-Day. And after the Civil War, a Southern chaplain, Father Abram Ryan, churned out a book of poems lamenting the fall of the Confederacy.

If you could tell Pope Francis one thing about Catholic chaplains in the U.S. Armed Forces, what would it be?

They are incredibly courageous, incredibly selfless and absolutely dedicated to ensuring that our servicemen and women have access to the Mass and the sacraments, and I will always feel that, through the ministry of these priests, they are still connected to the Catholic Church.

A high school instructor of mine, Father Aloysius McGonigal S.J., was later
a chaplain killed in Vietnam.

Thank you for sharing this story. Let's pray for the repose of Father McGonigal and for all who have died in wars throughout the centuries. May the Lord guide us to a more peaceful future.

I'd like to tell you a little story, Father, in the vein of asking you if any Catholic chaplain would be interested in discussing "just war theology" if a serviceman or woman asked about it:

When I was a Peace Corps Volunteer, I served with a young woman who had been a member of the staff of the American Army's newspaper during the time of the first Iraq War, when H.W. Bush was President. I reminded her that Pope John Paul II had denounced that war from the window of the papal palace in Rome as being immoral and unjust, and I asked her if she remembered that, and she responded, "Most certainly, and we ensured that the Catholic servicemen and women deployed in that campaign never saw the pope's statement. We blocked it out of our coverage."

Do you think the chaplains ever saw it? and what would they have told a Catholic soldier who had?

Oh my goodness! You talk about one "Father Rey," who served the American invaders of Mexico! Do you think that, perhaps, he uttered a single word of protest when the American executioners denied the San Patricios the consolation of the last rites of the Church before they were hanged?