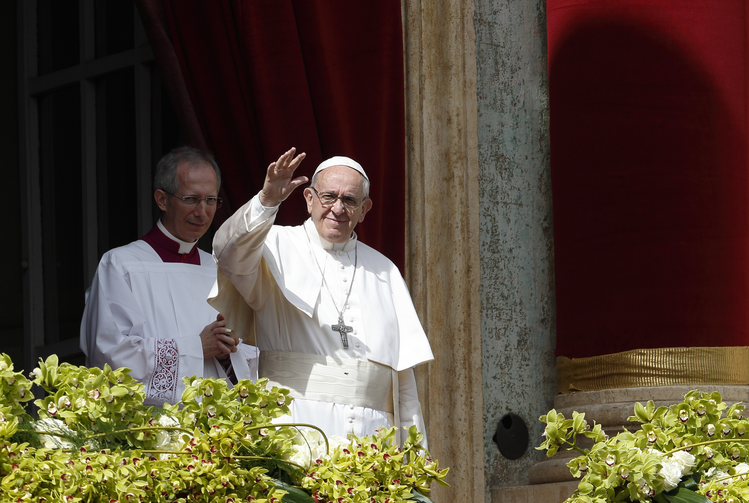 Pope Francis greets the crowd after delivering his Easter blessing "urbi et orbi" (to the city and the world) from the central balcony of St. Peter's Basilica at the Vatican April 1. (CNS photo/Paul Haring)

In his Easter message, Pope Francis reminded people throughout the world that “Christ’s resurrection is the true hope of the world” and appealed for peace and an end to “the carnage” of the seven-year war in Syria and for reconciliation in the Holy Land, which continues to suffer from a seven-decades long war.

He also prayed to the Risen Christ for “a just, peaceful and humane” solution “to the political and humanitarian crises” in Venezuela, and he asked the Risen Lord to bless the efforts aimed at bringing peace to the Korean peninsula.

Francis delivered his sixth Easter message as bishop of Rome and leader of the world’s 1.3 billion Catholics from the central balcony of St Peter’s to the tens of thousands of pilgrims from all continents that had earlier attended his Mass in St Peter’s Square, and to the inhabitants of the the city of Rome (“urbi) and the world (“orbi”).

He told his worldwide audience, millions of whom were following on television, that “We Christians believe and know that Christ’s resurrection is the true hope of the world, the hope that does not disappoint.” It “continues to bear fruit today in the furrows of our history, marked by so many acts of injustice and violence.” It “bears fruits of hope and dignity where there are deprivation and exclusion, hunger, and unemployment, where there are migrants and refugees (so often rejected by today’s culture of waste), and victims of the drug trade, human trafficking, and contemporary forms of slavery.”

He implored the Risen Lord to bless the entire world with peace and especially eight countries. Top of his list was “the beloved and long-suffering land of Syria, whose people are worn down by an apparently endless war.” He asked the Risen Christ to “illumine the consciences of all political and military leaders, so that a swift end may be brought to the carnage in course, that humanitarian law may be respected and that provisions be made to facilitate access to the aid so urgently needed by our brothers and sisters, while also ensuring fitting conditions for the return of the displaced.”

Next, he prayed for “reconciliation for the Holy Land,” which, he said, “is experiencing in these days the wounds of ongoing conflict” between Israeli’s and Palestinians “that do not spare the defenseless.” This seemed to be a reference to the killing of some 16 people and the injuring of many hundreds in recent days on the border between Gaza and Israel.

He also prayed that the Risen Christ would bring peace to the Yemen and other places in the Middle East.

He prayed too for the Christian population of the Middle East, “who, not-infrequently, put up with injustices and persecution,” and asked the Risen Lord to help them to “radiant witnesses” of “the victory of good over evil.”

He asked the Lord to bless “the discussions” under way in the Korean peninsula so that they “may advance harmony and peace within the region.”

He prayed for peace in the Ukraine and for “facilitating the humanitarian initiatives needed by its people.”

Pope Francis concluded his Easter message by praying that the world’s political leaders “may always respect human dignity, devote themselves actively to the pursuit of the common good, and ensure the development and security of their own citizens.”