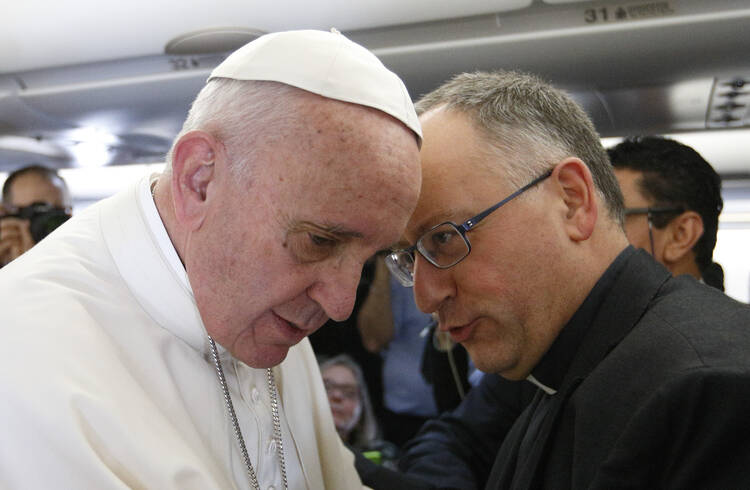 “Remain in the open sea! A Catholic must not have fear of the open sea, nor should she or he seek the shelter of safe ports," Pope Francis told the editors and staff of La Civilta Cattolica, the authoritative Jesuit review whose articles are published in Rome fortnightly with Vatican approval.

“Above all, as Jesuits you must avoid clinging to the certainties and securities. The Lord calls you to go out on mission, to go to the deep and not to go on pension to protect certainties," he told them as they celebrated the publication of the 400th edition of the review, founded 169 years ago. He reminded them that they are “not navigating alone”; they are sailing “in the barque of Peter,” as the pope’s predecessors from Pius IX onwards have confirmed. “This bond to the pontiff is an essential trait of your review,” he said.

He told them that the barque of Peter “many times in history—today as yesterday—can be rocked by the waves.” But, he added that this is nothing to wonder at. “Even the sailors who are called to row in the barque of Peter can row in the opposite direction. It has always happened!” he stated, alluding to a reality that has surfaced during his pontificate, with a small minority of cardinals and bishops rowing against him.

The first Jesuit pope thanked them “for having faithfully accompanied all the fundamental passages of my pontificate” starting with the first interview with Antonio Spadaro, S.J., in 2013, and subsequently by “giving a faithful interpretation” to the encyclicals and apostolic exhortations, as well as to the synods, the foreign trips and the Jubilee Year of Mercy. His message was clear: Civilta Cattolica has given the correct interpretation to such important documents as the encyclical “Laudato Si’” and the exhortation “Amoris Laetitia.”

Francis welcomed the news that this review, previously available only in Italian, will now be published also in English, French, Spanish and Korean. This will broaden its horizons and enable it to draw input from Jesuits worldwide.

The review’s mission is “to be Catholic," Francis stated. This does not simply mean that it is to defend Catholic ideas “as if Catholicism was a philosophy,” nor is it to appear as “something for the sacristy.” On the contrary, he said, “a review is only truly ‘catholic’ if it possesses Christ’s look on the world, and transmits that and witnesses to it.”

Civilta Cattolica must be both “a bridge” and “a frontier” as it carries out its mission at the service of the Gospel in the world, he said. He recalled that three years ago, he had summarized the mission of Jesuits in three words: dialogue, discernment, frontier. He reaffirmed these today but developed them with three other words: restlessness, openness and imagination. And he gave them a Jesuit saint as patron for each of these new ways of being.

Speaking of restlessness, he said that “only restlessness will give peace to the heart of a Jesuit” and that “if you wish to inhabit bridges and frontiers, you have to have a restless mind and heart.” He suggested they draw inspiration from St. Peter Faber (1506-46), a co-founder of the Society of Jesus, “a man of great desires, restless spirit, never satisfied, a pioneer of ecumenism.”

Then turning to the second word, “openness,” or “incompleteness,” Francis reminded them that “God is the God who is always greater [Deus semper maior], the God who always surprises us.” For this reason, he said, the Jesuits of Civilta Cattolica, “must be writers and journalists of an ‘incomplete’ thinking, that is open, and not closed or rigid. Your faith opens your thinking. Be guided by the prophetic spirit of the Gospel to have an original vision, that is alive, dynamic, not obvious.”

The pope emphasized that this spirit is particularly necessary in today’s world where “the culture of shipwreck” appears to triumph, nourished by “a profane messianism,” relativistic mediocrity, suspicion, rigidity and “the throwaway culture.”

He urged them to draw inspiration for this spirit of openness from Father Matteo Ricci (1552-1610), the Jesuit missionary to China, who composed a map of the world that helped to introduce the Chinese to other civilizations. Like him, the Jesuits at Civilta Cattolica should through their own mapping of the world make known the meaning of Catholic culture and help Catholics see that “God is at work also outside the boundaries of the church, in every true culture, with the breath of his Spirit.”

Last, Francis urged these Jesuit writers and journalists to be imaginative. “This is the time of discernment in the church and the world,” he said. He explained that this discernment “is always done in the presence of the Lord, looking at the signs, listening to the things that are happening and the feelings of people who know the humble life of daily struggle, and especially to the poor.” He encouraged them to “penetrate the ambiguity” of life as Jesus did by becoming man, and reminded them that “rigid thinking is not divine because Jesus assumed our flesh which is not rigid, except at the moment of death.”

To foster this spirit of imagination, Francis proposed they look to the Jesuit brother, Andrea Pozzo, S.J. (1642-1709), who through his imaginative painting and architecture produced magnificent works of art. In addition to this, he encouraged them to devote space in their review for art, literature, cinema, theater, music and poetry. He said “church thinking” must rediscover its human genius so as to be able to develop and deepen its teaching. He asserted that this genius will help them realize that “life is not a black and white painting but a colorful one with subtle shades.”

Pope Francis concluded this reflection by expressing the hope that Civilta Cattolica, in its various linguistic editions, would be distributed and used in educational centers, especially for teachers and parents. He strongly recommended that it be distributed and read in seminaries and centers of formation, and he asked bishops to give it their support.

Is it just me, or does Pope Francis speak in creepy manners like the ever-effeminate, possible NAMBLA member, Cardinal McCerrick? Why does the Pope and other cardinals act so much like Richard Simmons? Serious questions.