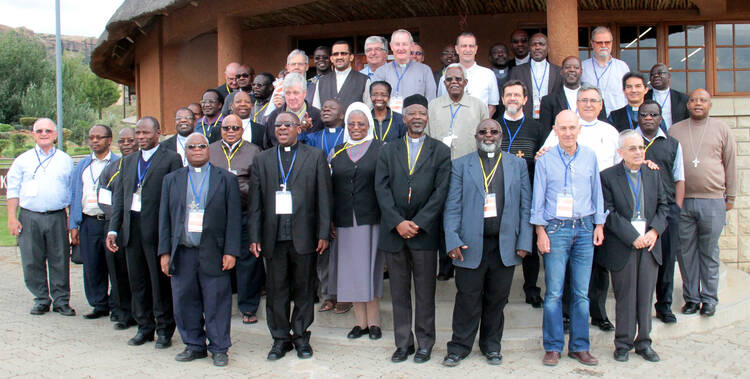 “Ecological spirituality” and Pope Francis’ encyclical “Laudato Si’” were on the minds of bishops in southern Africa at a gathering in November. Every three years the bishops of Southern Africa meet to reflect on a pre-determined theme and elect new leadership. The body, known as the Inter-Regional Meeting of the Bishops of Southern Africa (I.M.B.I.S.A.), just completed its 11th plenary session in Maseru, Lesotho, on Nov. 26.

I.M.B.IS.A.’s purpose is to encourage pastoral cooperation between the region’s six different episcopal conferences. The theme of the meeting this year was “Empowering the laity for effective engagement in socio-political and environmental issues. Laudato Si’ as a point of reference.”

The papal nuncio to South Africa, Botswana, Lesotho, Swaziland and Namibia, U.S.-born Archbishop Peter Wells, in a letter to former I.M.B.I.S.A. president, Bishop Frank Nubuasah of Francistown, Botswana, said that theme the plenary chose was one “that is very much felt by Pope Francis.”

“The Holy Father makes it clear,” he said, “that caring for our common home is a fundamental dimension of Christian spirituality and he asks believers, and indeed all people of good will, to commit themselves to practical forms of action stemming from what he calls an ‘ecological conversion.’”

Although he could not be present at the meeting, the nuncio told the bishops that he encourages them wholeheartedly to promote what the Holy Father has termed “ecological spirituality” among all the faithful.

Jacques Dinan, until 2015 the executive secretary of Caritas Africa, facilitated the meeting. Mr. Dinan used videos to summarize “Laudato Si.’” The bishops broke up into mixed groups (by languages) so that they could study and contextualize the issues that are addressed in the encyclical. Mr. Dinan encouraged them to look at the socio-political, economic and environmental factors affecting their countries and how “Laudato Si’” helps address them in a systematic way.

Although the bishops of the six conferences (Angola, São Tome and Principe; Lesotho; Mozambique; Namibia; Zimbabwe; and Southern Africa, comprised of Botswana, South Africa and Swaziland) share common concerns, there are also big differences between their territories. Some of the common issues would be poverty, large-scale unemployment, drought, corruption and economic and political instability.

There are also big differences between the territories. Swaziland, for example, is still ruled by an absolute monarch while South Africa is one of the most developed democracies on the continent. Namibia and Botswana are economically stable, but the economy of Zimbabwe has collapsed.

The political situation in Mozambique is very fragile. The peace agreement, negotiated by the community of Sant’Egidio in 1992 between warring Frelimo and Renamo political factions, has been tenuous in recent times. Lesotho too finds itself in a delicate political situation. Rogue army units have a nation living in fear, and there is increased political polarisation.

At the end of the meeting the bishops released a statement, noting that they had “analyzed the capacity and limitations of our Church and explored ways and means of implementing” the pope’s “Laudato Si.’” They said that they had given “attention to those manifestations of environmental destruction that are of immediate concern in our region and conference areas. These include pollution of the environment, harmful byproducts in the production of some sources of energy, water pollution and wastage. The consequences frequently result in diseases, corruption, consumerism, unemployment and inequality.”

The bishops said that they had identified practical ways informing themselves and the lay-faithful so that “a caring and responsible attitude towards the gift of creation” could be adopted.

The meeting mandated the I.M.B.I.S.A. secretariat and staff to “gather and disseminate information informed by Laudato Si’ with suggested specific concrete targets to enhance the awareness and implementation of our goals.”

They concluded: “We commit ourselves too with the care of our common home and we appeal to all women and men of goodwill to take the issue of the environment seriously.”

The new leadership of I.M.B.I.S.A. was elected during the meeting. Bishop Lucio Andrice Muandula of Xai-Xai, Mozambique, was elected as the president. The new vice-president is Archbishop Gerald Lerotholi, O.M.I., of Maseru, Lesotho. Archbishop Robert Ndlovu of Harare, Zimbabwe, is the new secretary general.

Bishop José Luis Ponce de León of Manzini, Swaziland, said that bishops identified as strengths the expertise of many laity who believe in the church and are actively participating in the life of church and society. “They know the situation on the ground probably better than any of the bishops and are ready to work with other cultures, Christians and faiths,” he said.

The bishops identified as weakness the lack of formation and training for lay people especially in the areas of church doctrine and Catholic Social Teaching. Sometime lay people are committed to what is done “in church” but not in society. It was also noted that at times there is a tendency to prioritize commitment to political parties over faith.

There are, the bishops said, opportunities. Many lay faithful are willing to serve and learn. In some dioceses, there has already been the creation of “Councils of the Laity.”

Bishop Ponce de León explained that some of the threats the bishops recognized were issues like people losing their employment because they would not subscribe to certain political ideologies. The bishops saw corruption and its effects—in many of the countries represented—as a real threat to local societies. They also said that there is, at times, a fear in the clergy of the lay faithful becoming “too strong.”

At the end of the meeting the bishops were reminded of all that is already being done. “We can sometimes forget the initiatives already present that need to be strengthened and are a great foundation for the way [forward],” Bishop Ponce de León said.

Russell Pollitt, S.J., is director of the Jesuit Institute South Africa and a Johannesburg correspondent for America.