1,000 march through Manhattan to remember Father Mychal Judge, the first recorded victim of 9/11

1,000 march through Manhattan to remember Father Mychal Judge, the first recorded victim of 9/11 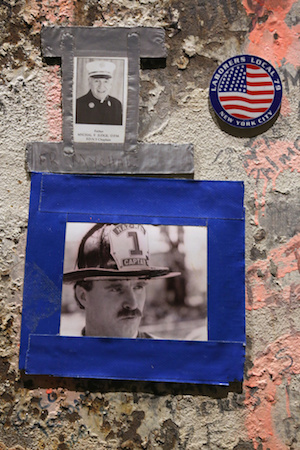 “Lord, take me where you want me to go. Let me meet who you want me to meet. Tell me what you want me to say and keep me out of your way.” Father Mychal Judge wrote this prayer and lived out its message. The New York Fire Department chaplain was focused on serving all those in his charge, including many of those lost in the attacks of Sept. 11, 2001.

“9/11 cannot be forgotten. It has to be remembered all over the world,” says Claire Ward, who flew to New York from Edinburgh, Scotland, to participate in the Father Mychal Judge 9/11 Walk of Remembrance, which is held each year on the Sunday before Sept. 11.

Father Judge was a well-known figure in his community. “He was a regular joe. Always a priest, but you could talk to him about anything,” the event’s organizer, John Bates, remembers. William Spade, a member of the Fire Department’s Special Operation Command on Sept. 11, recalls, “He always had a smile on and something nice to say.”

Kelly Lynch, founder of the charity Mychal’s Message, which provides necessities like socks to the homeless, never misses this chance to support the legacy of Father Judge.

Father Judge walked into the World Trade Center on Sept. 11 to perform last rites and he never walked out. He is considered the first casualty of the attacks. Mr. Spade, who passed Father Judge in the lobby of One W.T.C., remembers: “There was no talking to him that day…. He was pale, saying the rosary in his pocket.” Father Judge died of a heart attack in the chaos.

The Walk of Remembrance serves as a pilgrimage of sorts, following the footsteps of Father Judge on the last day of his life.

The day begins with a rosary led by Detective Steven McDonald of the New York Police Department, a close friend of Father Judge. The two met after Mr. McDonald was shot in the line of duty when Father Judge came to his hospital room to say Mass. Mr. McDonald, along with John Bates and a small group of friends, began the Walk of Remembrance the year after the attacks on the World Trade Center as a way to honor Father Judge.

A Mass at St. Francis of Assisi Church follows the rosary. The crowd then proceeds almost three miles through the streets of New York to St. Peter’s Roman Catholic Church, where Father Judge’s body was brought after his collapse at Ground Zero. The procession, which has grown to almost 1,000 participants, stops at firehouses along the way to remember the first responders lost on Sept. 11.

“It helps us start a difficult week,” says John Bates.

“It’s to remind everybody what was sacrificed that day,” Steven McDonald adds. “When so many people rightfully were running out to save their lives, other people were running in. Many of them died doing that.”