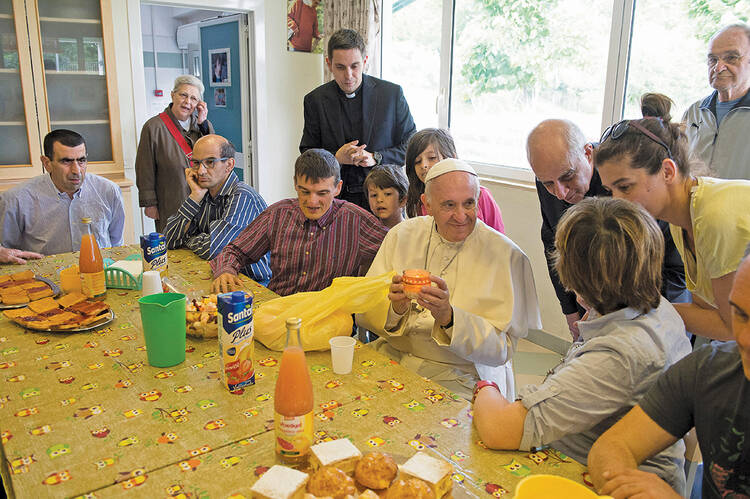 This past May, as part of his ongoing Fridays of Mercy ministry, Pope Francis paid a surprise visit to the Il Chicco L’Arche community in Ciampino, Italy, just outside of Rome.

In each of the 147 L’Arche communities around the world, people with and without intellectual disabilities share life together. During his visit the pope “sat with residents and shared a snack with them and the volunteers who live with them,” Vatican radio reported. In the photos from the visit, the characteristic joy and spontaneity of L’Arche are on full display.

In my favorite photo, Giorgio, an intellectually disabled community member, smiles from ear to ear, hugging the white-capped pontiff, who hugs him back with equal enthusiasm.

I knew Giorgio well. In the late 1990s, just out of college, I lived and volunteered for a year at Il Chicco. I remember how Roman Giorgio was, in looks and disposition: the aquiline nose and dark eyebrows, his penchant for making espressos. I remember how he greeted each person with such glee, as if he or she were the most famous person in the world—an enthusiasm, I am not surprised to know, he would also bestow on the man who may actually be the most famous person in the world.

That was L’Arche. Amid the challenges of disability, there was total acceptance. Behind the veil of life’s toil, joy abided in the smallest things: a hug, a good meal shared, a song sung together, a walk to the market to buy bread. The spiritual reverberations of living at Il Chicco still throb quietly in my life today. One experience remains emblematic.

It was a summer evening, and through a rare set of circumstances, Fabio, a core member of the community (as they are known), and I were the only two in the house. Normally there were eight of us, four core members and four assistants.

Each evening after dinner, we would light a candle, sit down and pray together in the living room. It was a short affair. We would sing, offer intentions and end with the song of L’Arche, a slow and tuneful prayer to Mary.

But that would not work if only Fabio and I were there. Besides his intellectual disability, Fabio was deaf and mute.

Housemates for 10 months by then, Fabio and I were friends. We were born the same year, 1975. We knew things about each other. For breakfast he would eat sweet biscuits drenched in milk while I sipped a café latte. He loved hugging people and I loved receiving those hugs. His sign language was his own, and we all became fluent. Twisting an index finger on your cheek meant you liked the pasta and wanted more.

Fabio also shouldered another, very visible, burden. His face and body were marked by bone disfigurement. From furtive glances to overt avoidance, many people had a reflexive response to seeing Fabio that I witnessed many times. They were instinctively repelled, at least at first. I did not hold it too much against them. Our eyes may be for judging, but our hearts are for knowing. To know Fabio was to love him.

After our dinner together, I motioned to Fabio to follow me into our small basement chapel. I figured that quiet prayer was probably best.

We sat together silently in the candle-lit chapel facing the altar. Above it hung a replica of the San Damiano cross. St. Francis, so the story goes, was praying before the 12th-century original in the Church of San Damiano in Assisi when God told him to repair the church. At first Francis believed it was the physical church that needed rebuilding, but later came to understand his broader mission. The church was broken by power and greed and Francis was called to change hearts. He lived to bring the church back to the simplicity of the Gospel.

I sat there with Fabio, before that cross, feeling lost in my own thoughts and brokenness, as I often am when I set myself to quiet prayer. At a certain point, I looked over at him. Something was going on.

Fabio was rapt, his eyes afire. He was staring intently at the cross and smiling. His expression, his whole being in fact, indicated he was communicating. But there was only the cross. I wondered what he saw. I got goosebumps.

Then it happened. Still smiling and still staring at the cross, Fabio opened his arms wide, imitating Jesus or trying to embrace him, I could not decide.

I think about it both ways because in both ways it is true.

Fabio remained that way for a while: one broken man embracing another. Then he turned his body toward me, his arms still held out wide, like a cross, his face still beaming. He was inviting me in—into his brokenness, into the brokenness of the cross and into a paradox: I never felt so whole as I did at that moment. I opened my arms wide too and smiled back.

So much of life seems broken—from our inner lives of quiet desperation to the outer, conflict-ridden world. The church is also wounded and needs repair. Pope Francis knows this and his saintly namesake did too. But there is a beauty in this brokenness that Fabio taught me and that Pope Francis reminded me of with his visit to L’Arche. And the beauty is this: It is our brokenness that leads us into the embrace. We only have to recognize this and mercy will be ours.

Dani Clark is a writer and editor at an international development organization in Washington, D.C., and a member of the Community of Sant’Egidio.

Show Comments (
1
)
Comments are automatically closed two weeks after an article's initial publication. See our comments policy for more.
Lisa Weber
6 years 1 month ago
Thank you for this good article acknowledging the gifts that the disabled can give us.