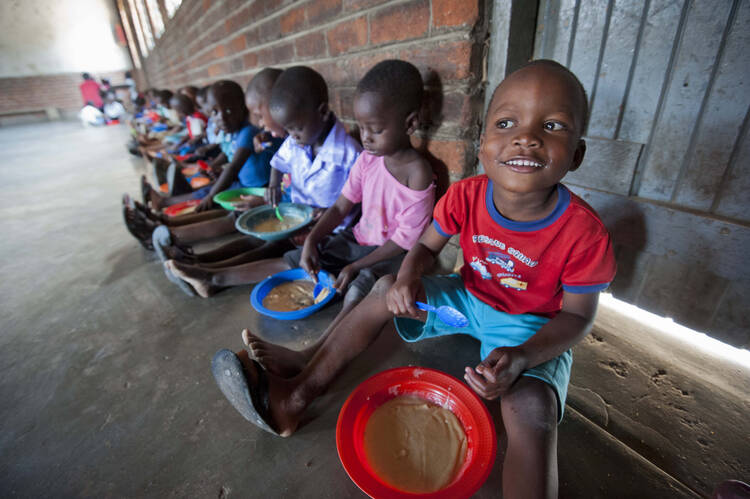 The Bishops of Malawi released a wide-ranging pastoral statement on the Year of Mercy last week. The bishops say that they wish to contextualize mercy as it relates to their country and speak words of hope to the people of Malawi.

The statement, entitled “Mercy of God as a Path to Hope,” reaffirmed the sanctity of life in a country where, the bishops say, there is a decline in the respect for human life. It reflects on many difficulties in Malawi including hunger, lack of security, corruption, lack of service delivery, poor economic development and tribal divisions. It also addresses abortion and homosexuality. Malawian media have described the letter as a “reality check” for the President Peter Mutharika’s administration.

The bishops begin by mentioning some positive trends in the country. These include participation in the 2014 tripartite elections which voted in a new government and president. They applaud the government’s response to flood victims and the public sector reforms that have been implemented. They say that the reforms “have the potential to inculcate a hardworking spirit, integrity and patriotism in all Malawians in general not only the civil service.”

The bishops then list areas of concern. In this section they chastise, heavily, the country’s president and government for what they call a “lack of visionary leadership.” They express their unhappiness with a broad range of issues and policies that, they say, hurt the majority poor. The statement also urges the people of Malawi to embrace transformative leadership that can change society.

“God recommends leadership that is visionary, transformative, empowering, caring, serving, protective, people-centered and obedient to Him,” the bishop’s say. “As your pastors, we cannot sit back and watch in the face of shrinking standards or lack of public service delivery, increasing gap between the rich and the poor, lack of fiscal discipline and misplaced priorities in the prevailing tough times which call for tough measures.”

The statement also critiques “unrealistic macroeconomic growth indicators that do not reflect reality on the ground.” The bishops say that they are “deeply worried” about the bad performance of the country’s economy, charging that poverty in the country is a direct result of wrong economic choices made by those in power. They bemoan the economy of exclusion, contradictions and inconsistencies and low education standards.

Some 2.8 million people face the prospects of hunger and food shortages in Malawi this year. The bishops express concern about the lack of maize in the country which the majority of Malawians depend on for their staple food. This year rains have been poor and this has resulted in great crop losses. Subsistence farmers who rely on the maize they cultivate are already experiencing serious difficulties in feeding themselves and their families.

“We are deeply concerned about the shortage of maize in the country, the exorbitant prices of the same [staple food] at the parallel markets of vendors due to increased demand,” the bishops wrote.

But the bishops urge the country’s faithful to reject pessimism in the face of Malawi’s problems. “In this Holy Year, it is our task to bring a word and gesture of consolation to the poor, to proclaim liberty to those bound by new forms of slavery of the modern society, to restore sight to those who can see no more because they are caught up in themselves, to restore dignity to all those from whom it has been robbed.”

They address a number of other issues: underutilized human resources, the impact of regionalism and tribalism, continued tensions and conflicts in local governance systems and structures. They also call for “mature and constructive opposition.”

In the pastoral letter the bishops speak out strongly against a culture of death and specifically address abortion and homosexuality in Malawian society. They encourage respect for people who are homosexual and condemn violence against homosexual people in the “strongest terms,” but charge that the family and the institution of marriage between a man and woman is under direct attack by those campaigning for homosexual rights and unions.

Surprisingly, in a pastoral letter contextualized within the Year of Mercy and in Catholic Social Teaching, the bishops criticize the government for declining to prosecute homosexual acts under law. The government placed a moratorium on the prosecution of people caught engaging in homosexual acts. The bishops charge that the government has given in to pressure from international bodies, donors and local human rights campaigners.

“As pastors, we find this path very unfortunate. It is an act of betrayal on the part of those in power to sell our country to foreign practices and tendencies contrary to the will of God because of money,” they said. The bishops go on to say that the “Jubilee of Mercy offers all sinners, including those that indulge in homosexual acts the possibility of experiencing God’s mercy especially through the sacrament of reconciliation.”

Catholic leaders play an important role in Malawi, despite the fact that Catholics compose only about 20 percent of the population. The church played a key role in the country’s 1992 transition to democracy and have been described by some in Malawi as the conscience of their nation. Most of the pastoral letter calls attention to injustices—such as food security, corruption and developmental issues as a result of bad governance. It is also interesting to note that ecological issues—important to Pope Francis—are listed last despite the devastating effect that climate change has had on Malawi.

Homosexuality was listed second, after abortion. “This ranking is curious and says a lot about the priorities of our bishops,” a Malawian priest who asked to remain anonymous said. “It’s sad.”

Even more curious is that the bishops call for mercy in their letter. “The letter should be commended for the excellent things it says about social and political issues but, it seems, loses much credibility in the way that it addresses gay issues,” he added.

It seems unfitting that in a country wracked by hunger and corruption the bishops chose to put, at the top of their list of priorities, homosexuality. It also seems to contradict the very spirit of the Year of Mercy.