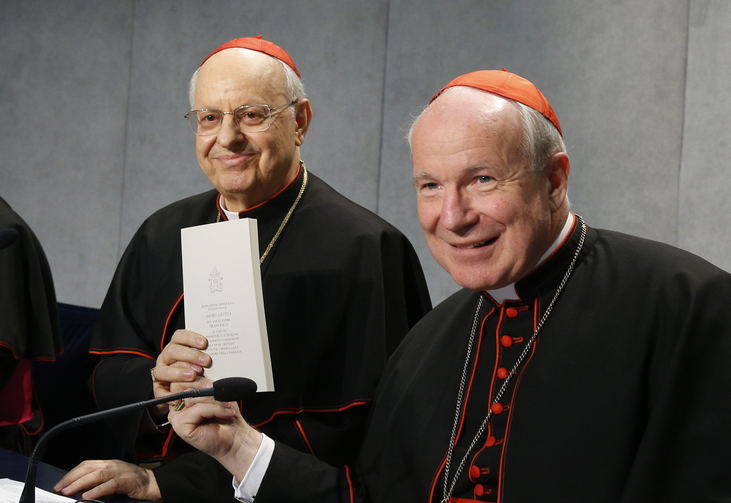 At a Vatican press conference to present Pope Francis’ new exhortation on the family, Cardinal Christoph Schönborn said there is “an organic development of doctrine” in “Amoris Laetitia” (“The Joy of Love”) when compared to a similar text, “Familiaris Consortio,” written by St. John Paul II after the 1980 Synod on the Family.

The archbishop of Vienna’s words are highly significant, since he is considered an authority in such matters. He is one of the theological heavyweights in the College of Cardinals, was chief editor of the Catechism of the Catholic Church, is very close to Benedict XVI and played an important role in the 2014 and 2015 synod of bishops. For all these reasons, Francis chose him, and not Cardinal Gerhard Müller, the Prefect of the Congregation for the Doctrine of the Faith, to present his post-synodal exhortation on the family to the international media.

His statement on the development of doctrine came in response to a question as to whether paragraph No. 84 of “Familiaris Consortio” is still valid given that in footnote No. 351 of “Amoris Laetitia,” Pope Francis opened the possibility that divorced and remarried Catholics could, in certain circumstances, receive the sacraments of reconciliation and Communion. St. John Paul II had ruled out such a possibility, unless the couple—who for serious reasons cannot separate—“take on themselves the duty to live in complete continence, that is, by abstinence from the acts proper to married couples.”

The Austrian cardinal describes Francis’ opening as “a classic case” of “the organic development of doctrine.” He explained that here “there is not a change [of doctrine],” but there is “the organic development of doctrine,” along the lines that John Henry Newman had envisaged. He recalled that just as John Paul II had “developed doctrine” in “Familiaris Consortio,” so, too, Francis has done the same in “Amoris Laetitia.” He suggested that one might even say that this new development was in some way “implicit” in No. 84 of “Familiaris Consortio,” which looked at three different situations. In any case, the cardinal said, “There is continuity in teaching here, but there is also something really new. There’s a real development [of doctrine], not a rupture.”

Asked why Francis had inserted this significant change into a footnote (No. 351) and not into the main body of the text, the cardinal responded, “I don’t know!” He suggested, however, that the reason may have been because Francis—as he said on several occasions—thinks “it’s a trap to focus on this single issue” because one risks losing the wider vision of marriage that is being presented here. Cardinal Schönborn then expressed his own view that perhaps the time has come, 50 years after the Second Vatican Council, to look anew at “how we understand the sacramental life.”

In his presentation, the Austrian prelate expressed “personal joy” at “the language and style” used by Francis which, he said, contrasts with the usual “ecclesial discourse on marriage and the family” where there is often a tendency “to discuss these realities of life on the basis of two separate tracks, the ‘regular’ where everything is according to the rules, and ‘irregular’ situations that represent a problem.” He confessed that he found such discourse particularly difficult since he came from “a patchwork family,” and felt such talk “may cause harm and can give the sensation of exclusion.” He noted that Francis, on the other hand, reaches out to everyone, and speaks about all situations “without cataloguing them,” and “with the eyes of Jesus that exclude no one.”

In his presentation at the press conference chaired by Federico Lombardi, S.J., the cardinal reminded reporters that Francis has described Chapters 4 and 5 “as central, not only in terms of their position but also their content,” because “we cannot encourage a path of fidelity and mutual self-giving without encouraging the growth, strengthening and deepening of conjugal and family love.” Caridnal Schönborn recommended that everyone meditate on the fourth chapter, where Francis “speaks, with rare clarity, of the role of the passions, emotion, eros and sexuality in married and family life.” As a member of the Order of Preachers, the cardinal observed that “it is not by chance that Pope Francis reconnects here with St. Thomas Aquinas, who attributes an important role to the passions, while modern society, often puritanical, has discredited or neglected them.”

Earlier, the Dominican cardinal said he took personal joy in the fact that “Amoris Laetitia,” written by a Jesuit pope, “is profoundly Thomistic.” In actual fact St. Thomas Aquinas is cited 19 times in the text, according to Cardinal Lorenzo Baldisseri, the secretary general of the synod of bishops, who was also on the panel presenting the text, together with an Italian married couple, Professors Francesco Miano and Giuseppina De Simone.

At another point in his presentation, the archbishop of Vienna highlighted the fact that Francis often returns to the issue of trust in the conscience of the faithful, and said: “We have been called to form consciences, not to replace them” (No. 37). But, the cardinal said,

The great question, obviously, is this: How do we form consciences? How do we arrive at what is the key concept of this great document, the key to correctly understanding Pope Francis’ intentions: ‘personal discernment,’ especially in difficult and complex situations?

He recalled that “discernment is a central concept in Ignatian exercises” which “must help to discern the will of God in the concrete situations of life.”

He emphasized that discernment should be of help to individuals “in reaching personal maturity: not forming automatons, externally conditioned and remote-controlled, but people who have matured in their friendship with Christ.” He added that “only when this personal discernment is “mature is it also possible to arrive at ‘pastoral discernment’; which is important especially in those situations that fall short of what the Lord demands of us” (No. 6). He noted that “pastoral discernment” is at the heart of the eighth chapter of “Amoris Laetitia.”

Asked by a reporter what happens if a bishop is unable to make a discernment, Cardinal Schönbornexplained that “discernment by its nature involves some uncertainty; the principles are clear but, as St. Thomas Aquinas said, the deeper we go the more difficult it is to discern.” He predicted that bishops and priests will have a lot of work to do as a result of this papal exhortation.