Pope Francis: ‘Those Who Have Tried to Destroy the Church’ Throughout History ‘Are Themselves Destroyed’ 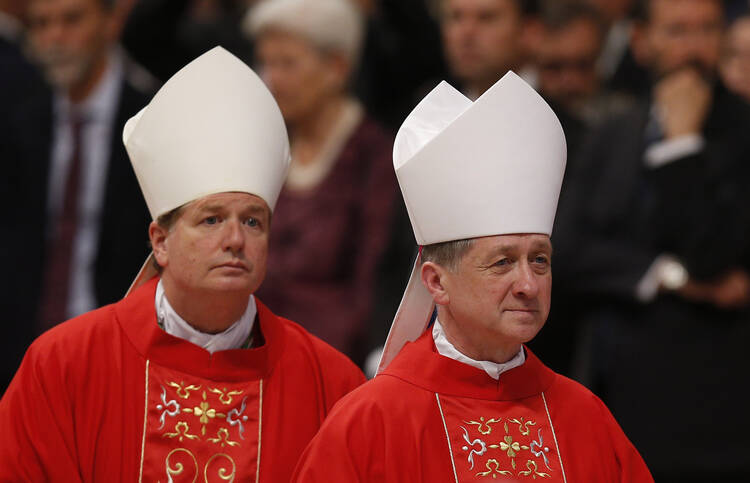 In a stirring response to the persecution and trials of the Church and Christians in many countries today, Pope Francis recalled that over the past 2,000 years “many forces have tried, and still do, to destroy the Church, from without as well as within, but they themselves are destroyed and the Church remains alive and fruitful.” Indeed, through God's help, “she remains inexplicably solid.”

He recalled this encouraging and indisputable historical fact in his homily in St Peter’s Basilica on June 29, at a Mass which he concelebrated with 46 new metropolitan archbishops from 34 countries. Among them were two from the United States: Archbishop Blase Cupich from Chicago - who had a private audience with him on June 26, and Archbishop John Wester of Santa Fe. Also present was Malta’s new archbishop, Charles Scicluna, who is known worldwide for his prosecution of clergy who sexually abused minors, when he was Promoter of Justice in the Vatican.

In what was perhaps the most powerful passage of his inspiring and challenging homily, Francis reminded the new archbishops and Christians worldwide that “everything passes; only God remains.” Indeed, he said, “kingdoms, peoples, cultures, nations, ideologies, powers have passed, but the Church, founded on Christ, notwithstanding the many storms and our many sins, remains ever faithful to the deposit of faith shown in service; for the Church does not belong to popes, bishops, priests, nor the lay faithful; the Church in every moment belongs solely to Christ. Only the one who lives in Christ promotes and defends the Church by holiness of life, after the example of Peter and Paul.”

He recalled that throughout history, from the very first days of Christianity, “In the name of Christ, believers have raised the dead; they have healed the sick; they have loved their persecutors; they have shown how there is no power capable of defeating the one who has the power of faith!”

Pope Francis spoke these inspiring words during the solemn celebration on the feast of Saints Peter and Paul, the patron saints of the Church in Rome, at a mass attended by relatives and friends of the new archbishops, as well as cardinals, bishops, priests, women and men religious, 8,000 faithful from all continents, and ambassadors from many of the 180 countries that have diplomatic relations with the Holy See.

In his homily, drawing on the heroic witness of the Christian community yesterday and today in the face of persecution, he called on the new metropolitan archbishops to live their lives consonant with this glorious tradition of the Church’s martyrs.

He began by recalling how the first Christian community was “besieged by persecution,” James was executed and Peter was arrested. But, he said, “I do not wish to dwell on these atrocious, inhuman and incomprehensible persecutions, sadly still present in many parts of the world, often under the silent gaze of all.”

Instead, he said, “I would like instead to pay homage today to the courage of the Apostles and that of the first Christian community.” Their courage “carried forward the work of evangelization, free of fear of death and martyrdom, within the social context of a pagan empire.” Drawing three points from their heroic witness to Jesus, he said their Christian life “is for us, the Christians of today, a powerful call to prayer, to faith and to witness.”

Looking at the new metropolitan archbishops, Pope Francis gave them that triple mission. In the first place, he said, “the Church wants you to be men of prayer, masters of prayer; that you may teach the people entrusted to your care that liberation from all forms of imprisonment is uniquely God’s work and the fruit of prayer; that God sends his angel at the opportune time in order to save us from the many forms of slavery and countless chains of worldliness. For those most in need, may you also be angels and messengers of charity!”

Secondly, he told them, “The Church desires you to be men of faith, masters of faith, who can teach the faithful to not be frightened of the many Herods who inflict on them persecution with every kind of cross. No Herod is able to banish the light of hope, of faith, or of charity in the one who believes in Christ!”

In the third but by no means last place, he informed them that, “The Church wants you to be men of witness. Saint Francis used to tell his brothers: “Preach the Gospel always, and if necessary, use words!” (cf. Franciscan sources, 43). There is no witness without a coherent lifestyle! Today there is no great need for masters, but for courageous witnesses, who are convinced and convincing; witnesses who are not ashamed of the Name of Christ and of His Cross; not before the roaring lions, nor before the powers of this world.”

He urged them to follow “the example of Peter and Paul and so many other witnesses along the course of the Church’s history, witnesses who, yet belonging to different Christian confessions, have contributed to demonstrating and bringing growth to the one Body of Christ.”

At the beginning of the celebration, Pope Francis blessed the palliums – a band of woolen cloth with six crosses woven in it, representing the wounds of Jesus – which the 46 archbishops will each receive in their respective cathedrals from the papal representatives in the coming months. He reminded them that the pallium which is placed over their shoulders is “a sign which represents the sheep that the shepherd carries on his shoulders as Christ the Good Shepherd does, and it is therefore a symbol of your pastoral mission.” It is also “a liturgical sign of communion that unites the See of Peter and his Successor to the Metropolitans, and through them to the other Bishops of the world.”

“Today – he told them – by these palliums, I wish to entrust you with this call to prayer, to faith and to witness: Teach prayer by praying, announce the faith by believing; offer witness by living!”

Following a decades-old tradition, an Orthodox Church delegation from the Ecumenical Patriarch of Constantinople, Bartholomew I, was also present at the celebration, led by Metropolitan John of Pergamon. Francis, who is the 266th successor of Saint Peter, greeted Metropolitan John on his arrival at the high altar. Later they exchanged the kiss of peace, and at the end of mass they went and prayed together at the tomb of Saint Peter, in the crypt under the high altar.

LINK TO TEXT OF HOMILY:

Gerard O’Connell
@gerryorome
Show Comments (
2
)
Comments are automatically closed two weeks after an article's initial publication. See our comments policy for more.
ed gleason
6 years 11 months ago
A/B Wester and A/B Cupich are great appointments. Both from the West and both have the Western openness toward the new and friendly qualities.
Nicholas Myra
6 years 11 months ago
Unfortunately many a priest and bishop's skull will litter the walls of hell according to St. John Chrysostom - also will litter the walls of hell will be those that back same-sex unions, murder of the unborn, socialism, mediocrity, lukewarmness, and apathy...Our Lady of Akita said that souls are falling into hell like snow flakes.