A Spiritual Challenge to Face a Crisis of our Own Making 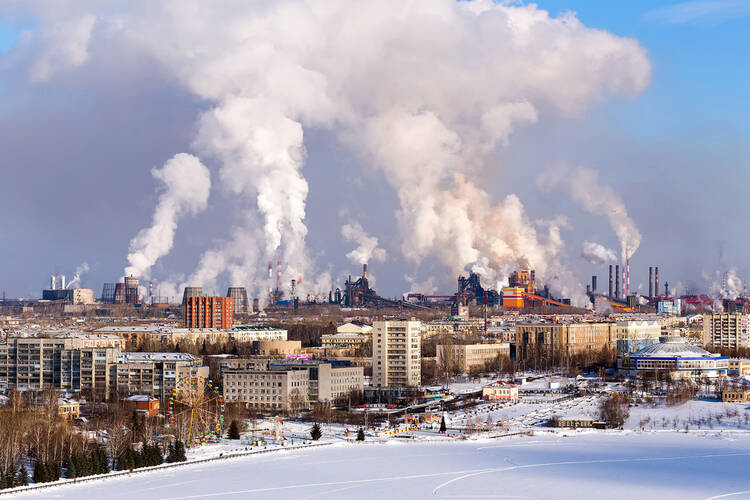 "Laudato Si’" brings a new spiritual depth to the tradition of papal social encyclicals. Extensive quotes from Christian mystical writers such as Therese of Liseux, John of the Cross and St. Bonaventure, and even the Sufi ‘Ali al-Khawas make clear something new is in play here. Pope Francis speaks directly to the spiritual questions that haunt us: anxiety about climate change, worry about social insecurity, grief and guilt at the destruction of nature and the extinction of species around us. He offers a mature courage, rooted in confidence of God’s creative power and awareness of our unavoidable role in salvation:

We are free to apply our intelligence towards things evolving positively, or towards adding new ills, new causes of suffering and real setbacks. This is what makes for the excitement and drama of human history, in which freedom, growth, salvation and love can blossom, or lead towards decadence and mutual destruction.…Yet God, who wishes to work with us and who counts on our cooperation, can also bring good out of the evil we have done (No. 79-80).

To Fall in Love

Francis of Assisi is the spiritual model of the encyclical. Francis, who kissed lepers and accompanied the poor, who preached to birds and even negotiated peace between a wolf and a town is the saint who personified the possibilities for humanity reconciled to God and the rest of creation. He shows us a path open to us through the crises we face.

"Just as happens when we fall in love with someone, whenever he would gaze at the sun, the moon or the smallest of animals, he burst into song, drawing all other creatures into his praise. He communed with all creation, even preaching to the flowers, inviting them “to praise the Lord, just as if they were endowed with reason.” His response to the world around him was so much more than intellectual appreciation or economic calculus, for to him each and every creature was a sister united to him by bonds of affection. That is why he felt called to care for all that exists"  (No. 11).

Science as Attending to Other Creatures

The encyclical does not “pronounce” a verdict on the cause of climate change.  It does something more profound: Francis presents science as a way of lovingly attending to the fullness of God’s creation.  Francis reviews “the results of the best scientific research available today,” in order to let them “touch us deeply and provide a…foundation for the ethical and spiritual itinerary” the encyclical charts through our social and ecological crises.

"Our goal is not to amass information or to satisfy curiosity, but rather to become painfully aware, to dare to turn what is happening to the world into our own personal suffering and thus to discover what each of us can do about it" (No. 19).

The central theme of the document—“integral ecology”— describes the interconnection of social and environmental problems.

"We are not faced with two separate crises, one environmental and the other social, but rather one complex crisis which is both social and environmental. Strategies for a solution demand an integrated approach to combating poverty, restoring dignity to the underprivileged, and at the same time protecting nature" (No. 139).

Here Francis builds upon Paul VI and Benedict XVI’s understanding of “integral development.” Because of its concern for the salvation of the whole person, the church embraced work for justice and development in the world.  This provided a basis for the Church to contribute its own vision of the human person to so-called secular issues of economics and politics.

At the heart of this vision is an understanding of the human person, not as an isolated and vulnerable individual, but as a person made for relationship with God and with brothers and sisters.

Francis expands the notion of integral ecology to embrace all of creation. We are sustained by our relationships not only with our fellow human beings in society, but in “universal brother- and sister-hood” with myriad plants and animals in the broader ecological community (No. 228).

Humans find fulfillment when they embrace “that Trinitarian dynamism which God imprinted in them when they were created. Everything is interconnected, and this invites us to develop a spirituality of that global solidarity which flows from the mystery of the Trinity" (No. 240).

Integral ecology is not simply an in-house Christian mystical vision. Francis offers it to the world as a lens for both diagnosing the sources of our social and ecological crisis and a map for addressing them. By insisting that “everything is interconnected” (the phrase is repeated many times) integral ecology can provide intellectual guidance for better understanding the complexity of the world we inhabit together.

There is no App for that

Francis critiques the dominant forms of technology and economics for their narrow solutionism and focus on short term profit that ignore the complex interconnections that sustain us. He rejects neither capitalism nor technology, but holds out hope that both can broaden their analysis of the world and contribute more fully to the common good.

Our dysfunctional form of capitalism is focused on short term profit, orienting our economy to wasteful consumer products and ignoring the longer term investments that could bring both sustainable profits and serve the common good (No. 109).  Contemporary technology is equally narrow:

"The specialization which belongs to technology makes it difficult to see the larger picture. The fragmentation of knowledge proves helpful for concrete applications, but it leads to a gradual loss of appreciation for the whole, for the relationships between things, and for the broader horizon, which then becomes irrelevant. This very fact makes it hard to find adequate ways of solving the more complex problems of today’s world, particularly those regarding the environment and the poor…" (No. 110).

"Many things have to change course, but it is we human beings above all who need to change. We lack an awareness of our common origin, of our mutual belonging, and of a future to be shared with everyone. This awareness can then become the basis for new convictions, attitudes and forms of life. A great cultural, spiritual and educational challenge stands before us, and it will demand that we set out on the long path of renewal" (No. 202).

This necessary change is intellectual and structural, but Francis ends the encyclical with an extended reflection on Christian spiritual resources for bringing about the required “ecological conversion.”  The sacraments invite us to “embrace the world on a different plane.” “Encountering God does not mean fleeing the world or turning our back on nature” (No. 235).  Sabbath rest instills in us “receptivity and gratuity” and makes us aware of the need to limit our use of the rest of creation (No. 237).

This change of heart leads to changes in lifestyle that Francis hopes can redirect consumption centered economies in a more sustainable and equitable direction (No. 208). The solution requires more than personal and market action.  It also requires structural change.  Francis refines the Catholic definition of government to address the current crisis: “true statecraft” requires we “think of the long-term common good” (No. 178).

Work for the reform of structures and policies does not leave the realm of faith.  Pope Benedict called it the “institutional,” or “political” path of caritas. Francis insists that “we should realize that” working to change “social dynamics,” is also a “part of our spirituality, which is an exercise of charity and, as such, matures and sanctifies us” (No. 231).

Much of the “pre-buttal” of the encyclical stressed the limits of papal authority. We were endlessly reminded that a pope could not pronounce on matters of science and that policy proposals are limited, prudential judgments. With the arrival of 'Laudato Si’' we find little evidence of either.

Pope Francis speaks as a teacher and pastor. Following papal social teaching before him,  he summons Catholic doctrine to interrogate the dysfunctions of human civilization and propose more healthy and just directions. These are far more than prudential matters, they implicate the central doctrines of the faith in our forms of social life.

Francis has not pronounced on matters of science. He has done something more demanding. He has reminded us that we are made in the image of the divine communion of the Trinity; and asked us on that basis to open our hearts to the whole world (including the lessons of climate science), to feel its suffering and respond with generous love.  To refuse his challenge involves so much more than disagreement concerning prudential judgments.