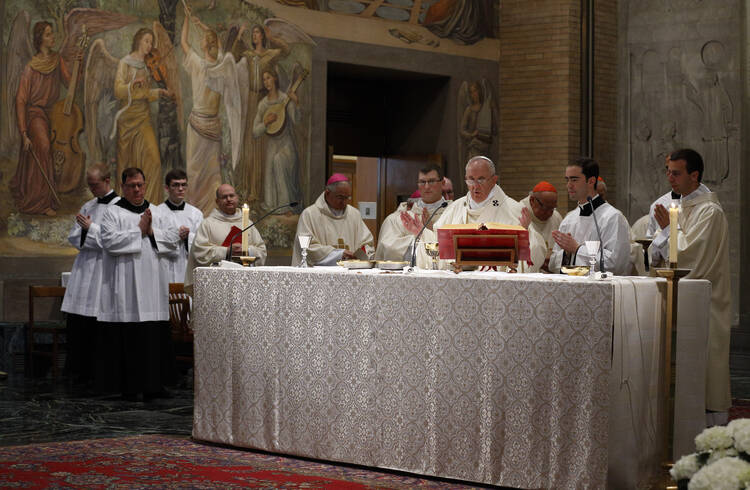 Pope Francis hailed Junipero Serra, whom he will canonize in Washington, D.C., in September, as “one of the founding fathers of the United States, a saintly example of the Church’s universality and special patron of the Hispanic people of the country.”

He did so in his homily during Mass at the North American College (NAC) in Rome on May 2, where some 250 young men from more than one hundred American dioceses are studying for the priesthood, and where the bells pealed with joy when he arrived.

Francis—the first pope to visit the NAC since 1980—came to celebrate Mass at the end of a morning’s reflection on Serra, an 18th-century Spanish Franciscan Friar. The symposium was chaired by Archbishop Joseph Kurtz, the president of the U.S. Bishops Conference.

Francis devoted his entire homily to the memory of this great evangelizer who will become the first Hispanic saint of the United States on September 23.

He began by recalling that Jesus sent his disciples to preach the Gospel to the ends of the earth and following that command “many missionaries,” including Junipero Serra (1713-1784), “brought the Gospel to the new world and, at the same time, defended the indigenous peoples against abuses by the colonizers.”

The latter remark was read as a defense of Serra against the charges that the Spanish friar was cruel to, or ill-treated, the native peoples of California. It was his only allusion to this in a twelve-minute homily, which he delivered in Italian.

On the other hand, substantial rebuttals to such charges were provided at a symposium earlier that morning at the NAC, particularlyin a brilliant talk by Archbishop José H. Gomez of Los Angeles, who offered strong evidence that Serra had in fact been “a protector and defender of the Indians,” and had gained a “Bill of Rights” for them (from the Spanish Viceroy in Mexico City) in 1773. He linked Serra to the unfolding history of America, and called for "a new conversation" about evangelization and the Indians. Another speaker, Professor Guzman Carriguiry, Secretary of the Pontifical Commission for Latin America, dismissed as “calumny” allegations that Serra was responsible for “genocide” and was “a persecutor of the indigenous peoples.”

Similar refutations of the distortions about Serra were made by the Franciscan relator of the cause for his canonization - Fr.  Vincenzo Criscuolo, and by the Supreme Knight of the Knights of Columbus, Carl Anderson, who recalled that Serra always tried to protect the Indians from the death penalty. Further evidence in the same vein was provided at a press briefing in Rome on April 30 by Professors Robert M. Senkewicz and Rose Marie Beebe, from Santa Clara University, Calif., who have just published a substantial new biography of Serra, "warts and all," in which they recognize that while corporal punishment was used at the time of the missions, Serra always rejected the use of the death penalty for the Indians, and sought their conversion but never 'by force.' Mgr. Francis Weber of Los Angeles archdiocese insisted that the word 'genocide' can only be used for what happened in the years following the California 'gold-rush' of 1849, long after Serra's death. Furthermore, Professor Rubén Mendoza, an archeologist from California State University, Monterey Bay, provided further evidence of the distortion of Serra's in more recent times.

Pope Francis, however,  did not attempt to enter that wider conversation, apart from that one reference about how the missionaries "defended the indigenous peoples against abuses by the colonizers."  In his poweful homily at Mass – which he concelebrated with seven cardinals, several bishops and the NAC Rector, Mgr. James Checcio – he spoke with passion about Serra the evangelizer. He highlighted the greatness of this courageous missionary, and emphasized his vital importance both to the history of the United States, and to the spirituality and history of the Spanish comunities in the Americas.

Francis said “he ushered in a new springtime of evangelization in those immense territories, extending from Florida to California, which, in the previous two hundred years, had been reached by missionaries from Spain” and this, he noted, was “long before the pilgrims of the Mayflower reached the North Atlantic Coast”.

He said that Serra, like Saints Paul, Barnabas and the early disciples of Jesus, “was filled with joy and the Holy Spirit “and “went out to all the geographical, social and existential peripheries, to bear witness to charity.”

The Jesuit pope wondered how many believers today would have “the same generosity and courage” as Serra to respond to the call of God “who invites us to leave everything in order to worship him, to follow him, to rediscover him in the face of the poor, to proclaim him to those who have not known Christ and, therefore, have not experienced the embrace of his mercy.”  Serra’s witness, he added, “calls us to get involved, personally, in the mission to the whole (American) continent.”

He recalled that Serra had entrusted his missionary activity to the Blessed Virgin Mary, and before leaving Mexico for California in 1769 he consecrated his life to Our Lady of Guadalupe and asked her “to open the hearts of the colonizers and the indigenous peoples, for the mission he was about to begin.”  Her image was present in the 21 missions that Serra founded along the coast of California, and since then she has become the Patroness of the American continent.

Then, in the third and particularly compelling part of his homily, Francis spoke about Serra's "witness of holiness" and linked him to the other great and humble saints of the Americas, many of whom he explicitly named.

Pope Francis concluded his homily by asking all present to pray for him as he makes his “apostolic journeys” to South and North America.  He will go to Ecuador, Bolivia and Paraguay in July, and then to Cuba and the United States in September.

The Rector of the North American College assured him of their prayers, and the staff, priests and seminarians lined the route to applaud and wave goodbye to him as he returned to the Vatican in his Ford Focus.  They felt particularly honored that their college was the first national college in Rome that the first pope from the Americas has visited.

Text of Archbishop Gomez's talk can be found at: http://media.la-archdiocese.org/pope-francis-archbishop-gomez-celebrate-life-and-mission-of-blessed-junipero-serra-at-special-conference-in-rome-2/