Pope Francis on the Dignity of Labor 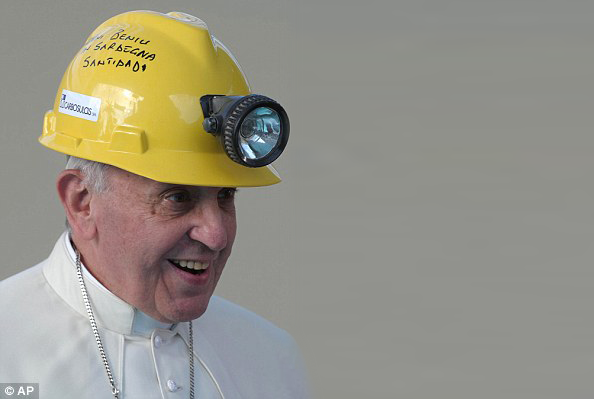 I have been asked by a Catholic labor group in San Francisco to talk about Pope Francis' position on the dignity of labor. It is one of three social issues which stand out in homilies and interviews by the pope. One such issue is the environment and its degradation. He has spoken on this topic many times, including his inaugural homily when installed as pope. There is already a rumor that he plans a social encyclical on the topic. On that theme, Francis follows the motif of Pope Benedict who tried to link environmental ecology to the theme of 'human' ecology which would also lift up the topic of labor. A second social theme the pope has frequently broached is the issue of forced migration. You may recall he went to meet a boatload of illegal immigrants in Lampadusa near Sicily. Once again, such forced migration could be linked to the lack of work opportunities in one's home country.

On the feast of Saint Joseph the Worker, the pope spoke about societies that put company profits above human dignity or even human life. "What point have we come to?", he asked. He noted that Jesus was a worker and lamented companies that put much more attention to profits than the dignity of labor. He lifted up the slave labor in garment factories in Bangladesh (there had been recent tragic deaths in a collapsed garment factory in Dakka). Expounding on the theme of the dignity of work, Francis said: "We do not get dignity from power or money or culture. We get dignity from work." He noted: "Work is fundamental to the dignity of the person. Work, to use an image, 'anoints' with dignity, fills us with dignity, makes us similar to God who has worked and still works, who always acts." Those familiar with the Ignatian Spiritual Exercises will note that this theme of God working or laboring comes from the signal contemplation for attaining the love of God where Ignatius speaks of a God who labors in all things. He ended his homily with the admonition: "I address a strong appeal that the dignity and safety of the worker always be protected."

On several occasions, Francis has talked about tackling unemployment and signaled out the high unemployment of youth as one of the two most salient issues facing the world at present. He also attacked what he called unjust salaries. On his trip to the World Youth Day in Brazil, the pope told reporters on the plane: "We are running the risk of having a generation that does not work. From work comes a person's dignity." He seemingly underscores a point found in the social teaching of John Paul II that dignified work not only implies remuneration sufficient for adequate housing, food, medical help etc. but also involves a kind of justice as participation. Through work we participate in society and have an active voice. Thus, even if welfare for those who can not find work or can not do it for physical reasons is a good thing, it is no substitute for the dignity which accrues to those who actively participate in work and in society.

On the 23rd of September, Francis ventured down to Cagniliarca, Sardinia where he met with a group of unemployed workers. He listened intently as they narrated their plight as people without work. Francis prayed at the end: "God give us work--teach us to fight for work"--that last phrase would seem to include unions and an active participation of workers in finding and co-creating work. They fight for it! At that same meeting, Francis said: "Not paying fairly, not giving a job because you are only looking at how to make a profit, that goes against God." Of course, other popes have said much the same but what is remarkable is that Francis chose a venue where he was actually talking to workers when he spoke!

On several occasions, Francis has talked about tackling unemployment and signaled out the high unemployment of youth as one of the two most salient issues facing the world at present. He also attacked what he called unjust salaries.

In his famous Oct. 1 interview with the atheist journalist, Eugenio Scalfari, which appeared in the Italian newspaper, La Repubblica, Francis said that the two biggest social evils which need to be addressed are the loneliness of the old and the unemployment of the young. He stated: "The young need work and have neither one nor the other and the problem is that they don't even look for them anymore. They have been crushed by the present. Can you live crushed under the weight of the present? Can you go on living like this ?" Scalfari rejoined that gaining employment was more a matter of the state to work out and did not, as such, effect the church. Francis in turn forcefully argued that humans are both bodies and souls, each effecting the other. Crush the body and soul, too, is damaged. Dignity is lost.

Just recently, Francis held a meeting with the Director General of the International Labor Organization (ILO), Guy Ryder. In private audience, the two, according to Ryder: "Discussed many of the issues that I think the church shares concerns about with the ILO. We are very much concerned with promoting decent work in the world at the ILO and Pope Francis spoke about the dignity of work, the importance with which the church and he personally attaches to the dignity of work and the challenges that that presents in today's world. And we talked particularly about the plight of some of the most vulnerable people in the world. And he spoke particularly about his concerns about human trafficking and migrant workers. I think we shared very much a concern that the way the global economy is working right now does not always work in favor of those weakest and this needs to be corrected." One is reminded of the two gnawing issues of growing income inequality around the world and low wages. Ryder and the pope also talked about two often overlooked groups of workers (domestic workers and mariners) and the need to make clear their labor rights.

In an address to workers in Italy on Sept. 22, Francis linked human ecology with the environment: "Work must be combined with the preservation of creation, so that this may be responsibly safeguarded for future generations. Creation is not a good to be exploited but a gift to look after. Ecological commitment itself affords an opportunity for new concern in the sectors linked to it, such as energy, the prevention and removal of different forms of pollution, being alert to forest fires. May caring for creation and looking after man through dignified work be a common task. Ecology is also human ecology."

Francis once said pastors should smell like their sheep. In his famous interview with the Jesuit journals, such as America, the pope distinguished between a kind of abstract looking at issues and a real insertion in the life of people as they live it. He mingled widely with ordinary workers in Argentina and, rather a new thing, as pope, offers mass for various workers in the Vatican. A phrase Francis used in his visit to Lampedusa needs to resonate widely. He talked about the danger of 'the globalization of indifference,' that is to say, that we stand back, look at these phenomena and somehow regard them as inevitable and normal in our world. That is a reaction we must absolutely refuse and react against. We need to fight for the dignity of work around the world!

Read this next: The pope just proposed a ‘universal basic wage.’ What does that mean for the United States?