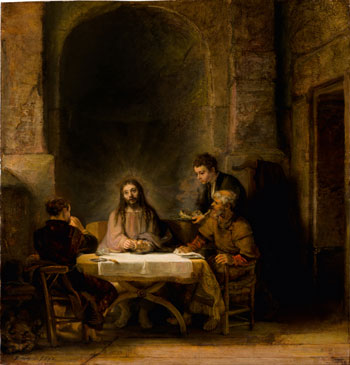 In all likelihood, Jesus of Nazareth was shorter and darker-skinned than most of us imagine—if, in today’s image-glutted culture, we imagine him at all.

St. Ignatius Loyola, in his Spiritual Exercises, recommended that one “compose the scene” about which one is praying, seeing the figures involved and their surroundings in intimate detail. It is part of his approach to prayer as a conversation among friends. Yet even the most ardent hearts may draw back these days from picturing the eye color, length of nose and chin-line of someone they may call friend but whose mercy also burns, as Flannery O’Connor wrote.

Early Christian writers like Justin, Tertullian and Clement of Alexandria supposed that Jesus was not striking in appearance. With the Gnostic impulses in the third century, however, the image of a youthfully perfect Jesus emerged, yielding then to the Christ of Byzantine icons, with a prophet’s beard, his hair parted in the middle and a mysterious, sideways glance.

The Byzantine influence continued into the early Netherlandish art of Jan van Eyck and Robert Campin. Even more influential were Veronica’s Veil (or the Sudarium) and the Mandylion of Edessa: the former, which artists commemorated in the Latin West as the veil Veronica pressed to Jesus’ face; the latter, venerated in the Byzantine East, a cloth Jesus was believed to have sent to Edessa to heal its king. A letter purportedly written by Publius Lentulus, governor of Judea before Pontius Pilate, was published in Cologne in the 14th century by Ludolph of Saxony in his Vita Christi. It described Jesus as having hair “the color of a ripe hazelnut, parted on top…his eyes…clear and commanding, never apt to laugh, but sooner inclined to cry. In sum…the most beautiful of all mortals.”

Rembrandt and the Face of Jesus, a finely focused exhibition that originated at the Louvre, is at the Philadelphia Museum of Art until Oct. 30 and will move to the Detroit Institute of Arts (Nov. 20 to Feb. 12). The show tells the story of how the greatest artist of the Dutch Golden Age responded to inherited imagery of Jesus, and especially of his face.

Rembrandt Harmensz van Rijn (1606-69), born in Leiden to a prosperous miller’s family, was gifted as a draftsman and painter but knew great personal sorrow as well. After moving from Leiden to Amsterdam in 1631, he met his future wife, Saskia van Uylenburgh, there in 1633 and grew successful enough to buy a large house for them in the center of the city’s Jewish quarter. Sephardic Jews had come the century before as refugees from the Inquisition in Spain and Portugal. Ashkenazi Jews began to arrive in the 1630s, fleeing oppression in Poland and Central Europe. Fascinated by their dress and manner, Rembrandt drew them all.

A gem-like painting from these years, “Christ and the Woman Taken in Adultery,” comes to the United States from London’s National Gallery for the first time. The lower third of the densely populated canvas shows the repentant woman kneeling in a brilliantly lit white dress, just left of center, as a central accuser points her out to Jesus—barefoot, with long, light-brown hair and a plain brown robe. The contrast between the woman’s downcast shame and Jesus’ calm compassion grips the viewer. But Jesus here is the traditional, generalized and idealized Christ who had figured in the artist’s earlier biblical scenes, including the “Passion of Christ” series, a crucial, early commission for Frederik Hendrik, the Stadtholder (or leader) of what was then called the United Provinces.

Drawings and etchings—of Christ in the house of Martha and Mary or raising Lazarus, for example—also show Jesus as a vigorous but not highly individualized figure. In two charcoal drawings made around 1648, however, Rembrandt uses a young Jewish man, likely Sephardic, as his model.

About the same time, in a series of perhaps eight oil sketches of which seven have survived, he and his studio worked from a similar model in highly personal studies of expression and pose. The exhibition brings six of the extant panels together for the first time since 1656, and the Jesus they imagine is arrestingly pensive, empathetic, interior. Dark eyes beneath dark brown hair open you into Jesus’ meditative mood. In a great panel from Berlin he even seems puzzled, fully human but strangely alone. The viewer is drawn to him, but also holds back. Another, showing him with clasped hands, was perhaps a study for a Mount of Olives scene. If this is indeed the prayer of testing, one does not wish to be found with the sleeping disciples.

Philadelphia’s fine example is closest to Berlin’s and suggests a moment just before such prayer. In a panel from Harvard’s Fogg Museum the prayer has become anguished, almost tortured.

One of the panels, from the Detroit Institute of Arts and “Attributed to Rembrandt,” has a soft, searching face that may have been a model for Jesus’ face in the Louvre’s “Supper at Emmaus” (in the United States for the first time since 1936). At table with his disciples in a high, rounded alcove—one of those grand empty spaces with which Rembrandt evokes the world—Jesus is pulling apart a loaf of braided challah. The younger disciple to the left folds his hands in prayer; his older friend at the right pushes back his chair; behind him a young boy, unaware, brings food to the table. But your eye returns always to the rapturous expression on Christ’s face. Yes, the story of the disciples who did not recognize their Lord has reached its climax in their sudden recognition of him over broken bread. Once more he communes with his brethren. But he is now glorified—and still more clearly communing with his God. This is the Rembrandt, as Simon Schama writes in Rembrandt’s Eyes, “who could make the things of this world hymn the sanctity of the world to come, yet manage, somehow, not to trespass impiously across its borders.”

About a year later, using etching, engraving and dry point on paper, Rembrandt produced his greatest print, “Christ Preaching: Bring Thy Little Children Unto Me,” known as “The Hundred Guilder Print” because of the remarkable sum paid for it. Blending scenes of Jesus healing the sick and rebuking the disciples for dismissing the children, Rembrandt’s skill in composing the scene and rendering its depths of light and darkness is astonishing. Together, the print, the oil sketches and the Louvre painting represent a watershed period of creativity. Now the viewer is drawn to the human, individual face of Jesus—and senses his healing command less in dramatic action than in sheer presence. As Master, he teaches us to pray. As anchor of our faith, his own prayer draws ours within his own.

From this time on, with the greater freedom of his so-called “rough style,” Rembrandt remained committed to a realistically imagined, meditative image of Jesus; and the show closes with a stunning, almost life-size bust of “Christ with His Arms Folded” (c. 1657-61), for which the Berlin “Head of Christ” may have been a model. In a brown cloak and russet tunic, the Lord turns to meet the viewer’s gaze fully. Uncommonly handsome, with long brown hair, dark eyes, an aquiline nose and sensuous lips, he addresses each of us individually and searchingly. What you might feel and say is between the two of you.

The serenity of the contemplative ideal has been achieved. Could it be taken any further? Or, with Rembrandt and his contemporary Velázquez, have the possibilities of realism for religious representation been taken as far as great art can reach? In these two artists, sobriety and serenity meet, painterly skill and holy mystery are one. Many paintings of Jesus that come afterward risk being moralistic, didactic or sentimental. For an increasingly critical and skeptical world, it is no wonder that the burning clarity of rediscovered early Flemish and Italian art (the so-called “primitives”) was such a revelation early in the 20th century, or that, mid-century, the elemental art of someone like Georges Rouault became plausible, or that Abstract Expressionism could then claim attention for its “spiritual intentions.”

Perhaps the purity and simplicity of some abstract art today or to come may suit our longing for visual religious expression. But in Philadelphia for the moment, and soon in Detroit, the face of Jesus is hauntingly present—even if it is three and a half centuries old.

View a narrated slideshow of Rembrandt's paintings of Jesus.

My wive and I travelled to Philadelphia recently to see this exhibit.  If you have the opportunity, I highly recommend making the trip to Philadelphia or Detriot.  The works displayed are highly moving and, despite the crowd, which in and of itself was very diverse, the mood was reverent and we had ample opportunity to spend time at each of the works.

In taking in "Supper at Emmaus", I reflected again the special gift Henri Nouwen received in having private time to view "The Return of the Prodigal Son" at the Hermitage.  We have had a reproduction of that painting hanging in our house for several years following a Lenten mission at our parish that used that painting as a focal point and I continue to focus on individual parts of it as pary oif my prayer and meditation.  We have added two of Rembrandt's "Face of Jesus" prints to our little "prayer corner" collection following our visit to Philadelphia.

If you go to the show at the Philadelphia Museum of Art, I also highly recommend viewing, and taking time to reflect upon, Henry Tanner's "The Annunciation" which is part of the PMA's permanent collection.

This article also appeared in print, under the headline “Imagining Jesus,” in the October 31, 2011, issue.