The Dulles Legacy: A selection of the late cardinal's writings for America 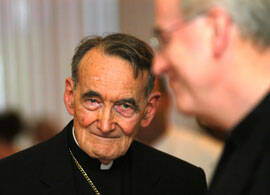 Cardinal Avery Dulles, S.J. (1918-2008), whose biography is reviewed in the Nov. 29 issue, wrote for America for over 40 years. Many of his articles were drawn from his Laurence J. McGinley lectures, which he delivered twice yearly at Fordham University since 1988. Below is a selection of articles Cardinal Dulles has written for America over the years, including a few of his McGinley lectures.

Cardinal Avery Dulles, S.J., served for many years as the Laurence J. McGinley Professor of Religion and Society at Fordham University, Bronx, N.Y.