The Death and Afterlife of the North American Martyrs: February-March Selection 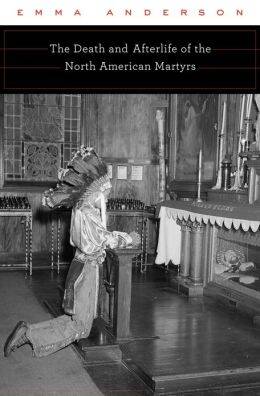 What is martyrdom? What is the difference between martyrdom and recklessness motivated by a desire to gain heaven? Does Tertullian’s claim, “the blood of martyrs is the seed of the Church,” inspire violence and the rash absorption of violence? Is evangelization, particularly the evangelization of a cultural minority, essentially a violent enterprise? Do the notions of martyrdom and sainthood sometimes succumb to racial and gender bias? That is, why are these individuals deemed martyrs and not those?

These are serious questions that lie at the heart of a controversial history of the deaths and subsequent cult of the North American martyrs. In her book The Death and Afterlife of the North American Martrys, Emma Anderson questions the “logic,” the “alchemy” and the “rhetoric” of martyrdom. In her argument, the term “martyrdom” implies innocence and sanctity (9). The term itself carries power, yet it is often used unreflectively. Anderson understands “martyrdom” as a concept that “always” represents the interpretation of a “given set of facts rather than being ‘a fact’ in and of itself” (8). The alchemy or the inverting logic of martyrdom turns defeat into victory—the blood of six Jesuit priests and two lay assistants anchored Christian France in its harsh new territory and sanctified the new continent’s soil. Anderson sees this logic applied once again to the French Canadian situation in the mid-nineteenth century. The French-Canadian nationalist movement reinterpreted their defeat in 1759 at the hands of the British as a victory, in that, Quebec was delivered from the violence and forced secularization of the French Revolution and its aftermath. Again, following the “master motif of Christian martyrdom,” French Canadians reinterpreted defeat by appropriating the “curious alchemy” of martyrdom.

Rene Goupil, a Jesuit donne, was killed in September 1642. Isaac Jogues and Jean de Lalande were killed in October of 1646. Jogues had been captured and tortured but escaped and spent four years in France before returning to Iroquois lands. Anderson depicts his death in vivid narrative (eventually, Jogues’s killer sought baptism and took Isaac Jogues’s name, fusing the native notion of incarnating the spirit of a dead warrior with the Christian notion of sacrament as death and rebirth in Christ). In July 1648, Antoine Daniel was shot through with arrows while administering the sacraments to dying members of his Wendat village (Saint-Joseph) in the midst of the Iroquois march through Huronia. As the Iroquois continued to advance, they captured Jean de Brebeuf and Gabriel Lalemant on the morning of March 16, 1649. Both were forced to run the gaunlet. While their captors discussed their fate, Brebeuf continued to pray aloud. Eventually, a Wendat-former Catholic (the Iroquois adopted some of the warriors that they captured) became enraged at Brebeuf’s ramblings and began to pour boiling water on Brebeuf’s head in the shape of a cross. The apostate’s actions initiated hours of torture. Brebeuf was finally killed, and Lallemant tortured and killed the next day. Charles Garnier was, much like Antoine Daniel, killed by a musket shot as he tended to his flock during an Iroquois raid in December 1649. A day later Noel Chabanel was killed by a Wendat apostate in a murder-robbery.

After the death of Brebeuf and the sacking of the Wendat villages in Huronia, the Jesuit mission and its superior, Paul Ragueneau, retreated eastward to Quebec. There, he became the spiritual director of a fierce Augustinian, Hospitaliere nun named Catherine de Saint-Augustin. Anderson’s depiction of Catherine and her mystical relationship with Brebeuf and Christ are fascinating. Catherine is the first person to advance the cult of Brebeuf and the others in a concrete way—using the relics that Ragueneau brought in his retreat from the mission villages on her patients. She even grated a piece of Brebeuf’s bone into the soups that she served the infirm in her hospital. In her prayer, she encounters a suffering and despairing Brebeuf. Likewise, she has vivid interactions with the suffering Christ. Christ and Brebeuf despair over the lukewarm faith of New France and threaten the territory with divine destruction. Anderson offers interesting insights as to how a female religious might relate to Christ. Essentially, Catherine is moved to pity for Christ. Such pity inspires her work and rigorous spiritual discipline. Furthermore, because she is a cloistered nun, she cannot encounter the Iroquois in the same way as Brebeuf and companions. Instead, she encounters the devil in a spiritual confrontation. Thus, she internalizes the missionary struggles that Brebeuf and companions lived in Huronia.

Pius XI canonized the eight North American martyrs as a group in 1930. They are the first saints from North America. Their iconography is found throughout the northeastern United States and Canada. The stained glass windows of the Jesuit novitiate in Syracuse depict the murders described above. In Europe, the deaths of Brebeuf and Lalemant inspired Goya’s frightening painting: Cannibals Preparing Their Victims. In Quebec, Joseph Legare’s painting, Souvenirs des Jesuites, marked the triumphant return of the Jesuits to Canada after the restoration of the Society (surprisingly Anderson fails to discuss the suppression and restoration of the Society of Jesus and suggests that the Society in Canada simply petered out with the death of Jean-Joseph Casot).

In the latter part of the nineteenth and early twentieth century, U.S. Jesuits led the cause for the canonization of Jogues, Goupil, Lalande and Kateri Tekakwitha (a native Iroquois who was eventually canonized in 2012). In the early 20th century, John Wynne, S.J., the founding editor of America, became the principal promoter of the cause. (In her endnotes, Anderson describes Wynne as spearheading the creation of the Catholic Encyclopedia and the founder of “the still extant Catholic journal America” (414). “Still extant” seems a bit pale. Perhaps, “still thriving” is more appropriate.) He eschewed the notion of Canadian and U.S. martyrs and created the title, North American martyrs, in order to widen devotion to the martyrs. He sought out Protestant intellectuals and Catholic lay organizations to discuss the historical and civic importance of the eight men. He also saw the canonization of these men as opening the door to the canonization of more American saints. Ultimately, he succeeded, but the devotion to the martyrs never spread throughout the United States.

I have chosen this history of the North American martyrs for several reasons. It represents modern scholarship regarding a fascinating set of events that shaped the Catholic Church and Society of Jesus in Canada and the United States. It represents modern questions regarding evangelization and pluralism, historical reconstruction and the cult of saints. To the believing Catholic, it is a work that is often maddening. It is quite cynical in parts: Anderson describes the relationship of Catherine de Saint-Augustin, Ragueneau and the dead Brebeuf as a “peculiar spiritual love triangle” (55); Jogues’s desire to pray as a captive is described as “insatiable lust for privacy” (24); Wynne’s shrewd promotion of the North American martyrs is depicted as “a spiritual ponzee scheme” (153). Nor does Anderson work to try to understand the spirituality of the martyrs. There is no mention of the Spiritual Exercises. There is no reflection on the meditation of Christ the King, the Two Standards or the Third Week—all of which influenced the eight men who were subsequently deemed martyrs by the Church. Furthermore, there is an underlying suspicion of inauthenticity regarding the motivations of the eight men who were killed. Did they seek death selfishly? Did their seeking martyrdom prompt more violence? And, there is a further, necessary question—free of such suspicion—what of the number of native Catholics that suffered and died along with the Jesuits who were killed? Are they martyrs? Did they die for the faith?

This is a controversial work—all the better to initiate conversation. Members of the Book Club have mentioned that they have been unable to finish the book before the month is up. And so, I am splitting up discussion on this book into two months. In February, we will discuss the first half of the book, up to the canonization of the martyrs. We will finish discussion on the book in March. I hope this gives folks time to get access to the book and give it a read. In order to spark discussion, I offer some questions below:

1. What do you know of the North American martyrs? Do you or anyone you know maintain a devotion to them? Are they difficult to relate to—unlike Elizabeth Anne Seton or Catherine Drexel? Have you ever been to either shrine dedicated to the martyrs?

2. Is martyrdom obvious? Must it be interpreted with a careful contemplation of historical circumstances? Controversies over martyrdom remain—was Edith Stein (St. Teresa Benedicta of the Cross) a martyr for the faith? What of Oscar Romero or the Jesuits of El Salvador? What constitutes genuine martyrdom?

3. How does one evangelize most authentically, most effectively?

Kevin Spinale, S.J. will lead part one of the discussion starting Friday Feb. 28.

Kevin Spinale, S.J., a student of theology at the Boston College School of Theology and Ministry, is the moderator of the Catholic Book Club.