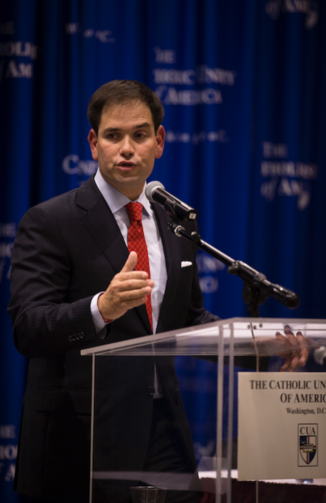 In the final days before the Iowa caucuses, the religious background of the presidential candidates—as well as the spiritual attitudes of voters—is getting some unexpected attention. On the Democratic side, Bernie Sanders was the subject of a Washington Post profile that pronounced, “as his bid for the White House gains momentum, he has the chance to make history. Not just as the first Jewish president—but as one of the few modern presidents to present himself as not religious.” (The reaction of National Catholic Reporter’s Michael Sean Winters: “Democratic Party campaign consultants may not see that this is a problem, but that tells you all you need to know about the myopia of Democratic Party consultants.”)

Among Republicans, the religious habits of Marco Rubio (cast months ago as the most likely “establishment” candidate, a role he’s been trying to shake off like a cat tortured by a piece of Scotch tape) has been drawing attention. Last week Politico examined his “circuitous faith—Catholicism to Mormonism back to Catholicism to a Southern Baptist Convention-affiliated evangelical megachurch and finally back to Catholicism.” Writer Michael Krause describes Mr. Rubio’s expressions of faith as “authentic” and argue that his “blurring of long-drawn lines between denominations” may resonate with younger voters. But he also quotes a Baptist pastor in the state with the first presidential contest: “When you say you’re doctrinally aligned with the Catholic Church, it really is contrary to what most evangelicals in Iowa believe.”

Then there’s the curious case of Republican frontrunner Donald Trump, who this week was endorsed by evangelical leader Jerry Falwell Jr., despite Mr. Trump’s rather hazy religious views and lack of familiarity with the Bible.

We won’t really know how Mr. Trump will fare among Catholic voters until the Iowa and New Hampshire results come in, but the group CatholicVote, a political advocacy group that emphasizes opposition to abortion, came out strongly against him this week in a website post that endorsed no one but said, “Some candidates ought to be disqualified from receiving the support of a Catholic voter.” By that group’s reckoning, Mr. Trump fails on the grounds of character (“he left his first wife and married his mistress, only to leave her a few years later for another mistress”), a lack of guiding principles, his intimations that he would work outside the law to achieve his goals (“Such a leader mirrors what we currently see in the White House”), and his “xenophobia” and “demagoguery” on immigration issues.

Religious leaders may be frustrated by election polls, as well as this week’s survey from the Pew Research Center, showing that “Trump is widely viewed as a potentially ‘good’ or ‘great’ president by GOP voters in spite of the fact that, compared with other leading candidates, relatively few Republicans think Trump is a particularly religious person.”

In the January survey of 2,009 adults, only 5 percent of those who identify with the Republican Party described Mr. Trump as “very religious” and 39 percent called him “somewhat religious.” That total of 44 percent was much lower than the 70 percent who said the same of Mr. Rubio or the 76 percent who said it of Ted Cruz.

“Many Republicans think Trump would be a good president despite his perceived lack of religiousness,” the Pew report continues. “Of the 56% of GOP voters who think Trump would be a good or great president, a substantial minority of them (17% of Republican registered voters overall) say they think Trump is not religious.” That tells me that most of his supporters do not accept the mainstream media’s implication that Mr. Trump’s recent church attendance is phony, but almost none of the supporters of Mr. Rubio and Mr. Cruz doubt the religious convictions of their candidates.