Obamacare and motherhood, plus the wisdom of ballot questions 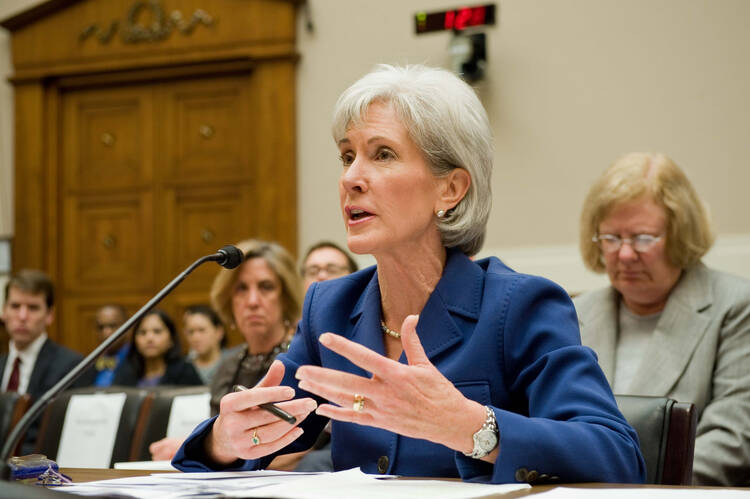 Newshounds must be getting tired of reading about Obamacare, especially if they have good health insurance from their employers and aren’t affected by the law. (Premium increases happened on a regular basis before Barack Obama was elected president.) But when the House of Representatives calls in a Cabinet official for a scolding, it’s still big news.

Republicans are naturally asking questions about the program’s poorly functioning websites, and they’re entitled to criticize President Obama for his overly broad promise that no one who already has insurance would have to change plans. But it’s astounding that conservatives voice such outrage about men having to buy plans that cover maternity care. Do they have mothers? Do they think their wives, sisters, and nieces are freeloaders because Obamacare won’t let insurance plans charge them more for being able to bear children? Is it unfair that guys in their 20s can’t buy plans that exclude hip replacements, or that people of European heritage can’t buy cheaper plans that don’t cover treatment for sickle cell anemia?

New York magazine’s Jonathan Chait, in a post entitled “The Republican Health-Care Plan: Repeal and Cackle,” writes that the objections from conservatives are not just about personal choice but about the old obsession with anything that smacks of wealth redistribution:

The old, lightly regulated system encouraged insurers to pick up healthy customers and do everything to avoid covering people who might incur high costs—people with preexisting conditions, women of childbearing age, and so on. This system was much more ideologically congenial to the right, as it allowed the “makers” to enjoy the financial fruits of their good health without having to cross-subsidize the “takers.” And they see the [Obamacare] tumult as vindication of the conservative belief in a lightly regulated system, with less comprehensive coverage, and less shifting of resources from the healthy to the sick.

the truth is, [Obama] wants you to pay for coverage you'll never use (mental-health services, cancer wigs, fertility treatments, Viagra) so the money can be spent on somebody else.

The certainty that one will "never use" mental-health services takes the feeling of invincibility to a worrisome level; it's like someone who won't wear a seat belt because he's so confident about his driving ability. And Mr. Jenkins might want to reconsider the rather ungallant suggestion that guys like himself shouldn’t be expected to help pay for the cost of women's cancer wigs.

It would be nice to buy insurance that covers only health services I intend to use, like the mythical pick-your-channels cable-TV package, but the insurance industry doesn’t work that way. Still, if a House Republican wants to start lowering the cost of Obamacare-mandated policies by taking erectile dysfunction off the list of medical conditions that must be covered, he’s welcome to try. Let’s see how many votes he gets from his colleagues.

Chait does not think the GOP still has a chance at outright repeal (“Which regulations do they want to strip away? Discrimination against people with preexisting conditions?”), but the party has a great talking point for young white men in upcoming elections. As if that’s the demographic group they need to make gains with.

—New Yorker film critic David Denby on Ted Cruz and his fight against Obamacare: “It takes a certain ingenuity to suggest that an attempt to insure the powerless is rendering them powerless.”

—There’s a tiny upside for the Obama administration in the nonstop reporting on the rocky implementation of the Affordable Care Act: Maybe people won’t notice a new Brookings Institution report critical of the 2009 “cash for clunkers” program, which allowed Americans to trade in old cars and trucks for vouchers toward more fuel-efficient vehicles. From the press release on the report:

• The $2.85 billion program provided a short-term boost in vehicle sales, but the small increase in employment came at a far higher implied cost per job created ($1.4 million) than other fiscal stimulus programs, such as increasing unemployment aid, reducing employers’ and employees’ payroll taxes, or allowing the expensing of investment costs.

• Total emissions reduction was not substantial because only about half a percent of all vehicles in the United States were the new, more energy-efficient CARS vehicles.

Getting back to the idea of spreading the wealth, Bill de Blasio, the overwhelming favorite to be elected mayor of New York next week, is talking about applying that principle to city parks. De Blasio supports legislation that, as the Wall Street Journalexplains, would “force a park conservancy with a budget of $5 million or more to give 20% of its operating funds for redistribution to other parks." This would mean a shift in resources from high-profile parks that collect lots of donations through nonprofit groups (like Central Park, Prospect Park in Brooklyn, and the High Line) to smaller neighborhood parks in places like the South Bronx and Queens.

The Weekly Standard’s Evan Sparks is not happy with this idea:

Central Park is uniquely positioned to attract donors because it serves so many people from so many walks of life. Many of the hedge-fund titans who donate to the conservancy played in the park as working-class kids. They want to give to a particular park.

[…] The parks bill is also an assault on the principle of philanthropic freedom—the liberty that all Americans have always enjoyed to choose the objects of their private giving. By endorsing this plan, de Blasio is substituting his policy preferences for the charitable choices of thousands.

De Blasio’s support is no surprise, as it fits neatly with his big campaign theme of “tackling the inequality crisis” in New York. It’s also a sign of the times, as glitzy, revitalized major cities worry less about attracting and pleasing high-income residents. De Blasio might win a bet that for every hedge-fund titan who withdraws support for Central Park in a fit of pique, there are multiple New Yorkers who will be happy to pitch in for parks all over the city.

California’s Browns clash on the wisdom of ballot questions

Planetizen notes that California Gov. Jerry Brown recently praised his state’s frequently used voter referendum process (“The people themselves through the initiative actually broke a decade of dysfunction and laid the foundation for a government that works”). This isn’t a new attitude for him; he famously opposed Proposition 13 and its property-tax cap when he was governor in 1978, then embraced the measure when voters gave it a thumbs-up. But Willie Brown, the former State Assembly Speaker, isn’t so sanguine about California’s plethora of ballot questions. According to the Los Angeles Times’s George Skelton, Brown boasts that he has never voted for a ballot initiative:

Public policy should not be decided by the public in the voting booth, he said. It should be the province of elected officials in the state Capitol. “Democracy,” he continued, “requires reasonable debate among people who have been designated as representatives” and are “usually well informed.”

Devious initiative campaigns, he asserted, too often result in voter decisions that are “inconsistent with good and quality judgment.”

He added: “I clearly understand that I am in a distinct minority. People in this state are out to lunch” in their love of the initiative system.

Willie Brown has a personal reason grudge against ballot questions, as one of them instituted the term-limits law in California that forced him into retirement. Could this big-government liberal find common ground with the libertarian who argues that “rationally ignorant voters” are a problem in American elections?

Robert David Sullivan
RobertDSullivan
Show Comments (
1
)
Comments are automatically closed two weeks after an article's initial publication. See our comments policy for more.
ed gleason
9 years 3 months ago
Like Willie Brown I usually vote against ballot initiatives, because most always they are bought and paid for by a special interest group who PAY to get signatures to place their issue on the ballot.Those initiatives like Prop 13 and term limits were very popular issues that did not need paid signatures to get on the ballot and therefore will never be repealed. too bad so sad for too many Pols.