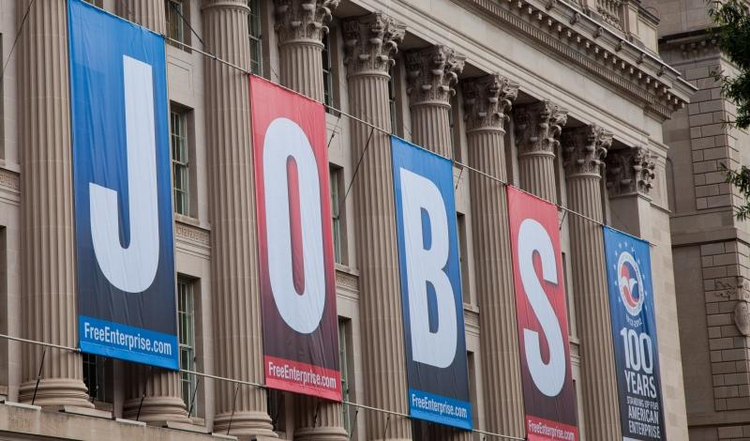 The employment rate has long been the most popular measure of economic health—popular in the sense of being easily grasped by voters, as opposed to the gross domestic product. But in his State of the Union address, President Barack Obama gave it the back of his hand, and he signaled that economic security, not job creation, is going to be the primary selling point of the Democratic Party.

The Republicans, who like to portray themselves as the defenders of “job creators,” need to figure out how to appeal to Americans who have jobs but are still falling behind. The GOP’s most reliable voters do not work full-time—they’re retired—and have a disproportionate influence in midterm elections. They won’t be enough in a presidential year, and the Republican nominee will have to do more than preach the “dignity of work.”

In his speech, Obama did have some good job numbers to report, and he unloaded them right away: “Our economy is growing and creating jobs at the fastest pace since 1999. Our unemployment rate is now lower than it was before the financial crisis.” If his party still controlled Congress, he might have come under pressure to declare victory and leave well enough alone. With the Republican Party ascendant, he instead made the case that an honest wage isn’t always enough.

Obama tried to create a new political buzzphrase, “middle-class economics,” which he defined as “helping working families feel more secure in a world of constant change. That means helping folks afford childcare, college, health care, a home, retirement.” In addition to tax breaks and subsidies for these household costs, Obama called for action on mandated sick leave (“We’re the only advanced country on Earth that doesn’t guarantee paid sick leave or paid maternity leave to our workers”), enforcement of laws on overtime pay (“We still need to make sure employees get the overtime they’ve earned”) and an increase in the federal minimum wage (“To everyone in this Congress who still refuses to raise the minimum wage, I say this: If you truly believe you could work full-time and support a family on less than $15,000 a year, go try it.”)

Slate’s Jamelle Bouie called the speech has “a muscular defense of the [Democratic] party’s liberalism.” In his focus on helping families avoid financial setbacks—the kind triggered by illness or spiraling daycare costs or unexpected college fees—Obama was clearly influenced by party superstar Sen. Elizabeth Warren, who made her name researching the causes of household bankruptcy. But Hillary Clinton should have no problem embracing what are small policy potatoes compared with the Affordable Care Act.

Bouie calls the State of the Union list “a direct answer to the core question of the political moment: How can our government deliver the gains of economic growth to ordinary people?” For much of the 20th century, the Democratic Party made “full employment” one of its primary policy goals (the term was in party platforms from 1944 through 1988). But that was when a large share of the workforce belonged to labor unions, which fought against lay-offs and lobbied for such benefits as health insurance and sick days. Now the idea that you can achieve financial security by simply landing a job is as quaint as the notion of starting a college fund with a paper route.

The Republican Party may try to dismiss Obama’s “middle-class economics” as nothing more than prophylactics against financial risk. Instead of subsidizing child care for working parents, why not encourage more Americans to make money by starting their own businesses or investing in the stock market? Opportunity, not financial security, has long been the GOP brand.

But even Republicans are feeling pressure to save the middle class. In his rebuttal to the State of the Union address, likely GOP presidential candidate Rand Paul complained, “Income inequality has worsened under this administration. And tonight, President Obama offers more of the same policies—policies that have allowed the poor to get poorer and the rich to get richer.” Another presidential contender, tea party favorite Ted Cruz, told Fox News, “The top 1 percent earn a higher share of the national income than any year since 1928. The sad reality is that with big government, under the Obama administration, the rich and powerful…have gotten fat and happy.”

Rick Santorum, who ran for president in 2012 and is expected to try again, may have been ahead of this curve last March, when he groused about his own party, “That is the problem with Republicans. We talk about job creators all the time. It’s always job creators, job creators. It’s not about the job holder.”

This is not the kind of rhetoric that one associates with the U.S. Chamber of Commerce, or with stubbornly optimistic Ronald Reagan. Indeed, Obama’s proposals will probably go nowhere in the Republican-controlled Congress, which is no mood to, say, raise taxes on the top 1 percent to help make community colleges free for all.

In the official response to the State of the Union, Republican Sen. Joni Ernst ignored Obama’s proposals, instead calling for the approval of the Keystone Pipeline as a jobs measure. (Even the wildly optimistic estimate of 42,000 jobs would hardly register in an economy producing hundreds of thousands of new jobs each month.) Ernst’s big proposal, however, was a chestnut that appeals more to entrepreneurs than minimum-wage earners: “Let’s simplify America’s outdated and loophole-ridden tax code. Republicans think tax filing should be easier for you, not just the well-connected.”

Ironically, if the biggest worry of working families was how much time it takes to file taxes, Barack Obama’s approval ratings would be so high that Ernst probably wouldn’t have won her Senate seat last November.

Image from the U.S. Chamber of Commerce Foundation.

Show Comments (
3
)
Comments are automatically closed two weeks after an article's initial publication. See our comments policy for more.
Joshua DeCuir
5 years 9 months ago
Newsflash to Mr. Sullivan - Republicans have begun shaping a middle class agenda for some time. Indeed, the President's proposal to raise the EITC is a page directly from their book. Mike Lee proposed a tax reform proposal last year that generally met with some openness among people like Ron Wyden. Ramesh Ponnuru, Ross Douthat, EJ Dionne, among many, many others, have discussed these proposals. http://ygnetwork.org/roomtogrow/ http://www.brookings.edu/events/2014/06/26-reformicons-discussion-reform-conservative-movement
Joseph J Dunn
5 years 9 months ago
"Obama tried to create a new political buzzphrase, “middle-class economics,” which he defined as “helping working families feel more secure in a world of constant change. That means helping folks afford childcare, college, health care, a home, retirement.” In addition to tax breaks and subsidies for these household costs...his focus on helping families avoid financial setbacks—the kind triggered by illness or spiraling daycare costs or unexpected college fees" It may be important to read the details of at least one of the President's specific proposals for middle class families: http://www.wsj.com/articles/now-hes-after-middle-class-savers-1421887035 http://www.wsj.com/articles/the-first-familys-529-windfall-1421971231 Also, the notion that job security can be targeted without job creation, as suggested in Mr. Sullivan's first paragraph, is a strategy proven false on many prior occassions. Job security and rising incomes occur when employers are looking for more workers than there are job seekers. That occurs when job creation is strong. Mario Draghi, head of Europe's Central Bank, launched major monetary stimulus program this week, to try to get Europe's economy growing again. In a continent long known to prefer job security over job creation, their recovery is far behind that of the U.S., disappointingly slow as ours has been. Draghi offered the following: "What monetary policy can do is create the basis for growth. But for growth to pick up, you need investment confidence. And for confidence, you need structural reform." Messrs. Obama and Draghi are both intelligent men. Maybe they should have a conversation and compare ideas. They can't both be right.
Chuck Kotlarz
5 years 9 months ago
It’s Catholic schools week. The tuition for one year for every US K through 12 Catholic school student perhaps could be paid by the estimated tax deduction on Harvard’s $32 billion endowment. Apparently 135 million federal income tax filers have a big heart in subsidizing Harvard for the kids of Wall Street executives and Fortune 500 CEO’s.