New York Gets Tired of Itself 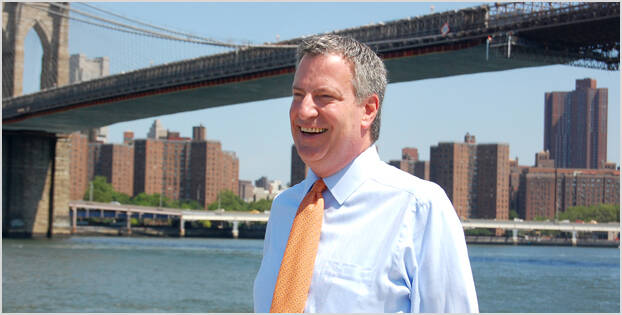 Today is the first round of the New York mayor’s race, which got more national attention than usual because of the possibility that former congressman (and smutty-photo tweeter) Anthony Weiner would win, inspiring stories about how Americans like redemption stories and are getting more European in their attitudes toward sex and politics. But Weiner plummeted in the polls after admitting that he had kept up his communications to women other than his wife even after he had promised a sexting cease-fire. In retrospect, his temporary lead in the polls was part of an Anybody But Christine Quinn movement, which in turn, seems to be about restlessness and a desire for change in what is, by most measures, a well-functioning, prosperous city.

City Council Speaker Quinn has now lost her lead to two different people, with Bill de Blasio, the city’s elected public advocate, now the favorite to finish first in today’s primary, possibly getting the 40 percent needed to avoid a run-off. There are no statistically significant differences in support for the self-identified progressive across racial and religious groups, something new for New York—as is an Italian-American mayoral candidate with an African-American wife. “Although not quite as upset as Manhattan’s financial elites at de Blasio’s rise,” Matt Taylor writes at The American Prospect, “his Democratic rivals are nearly as alarmed at the prospect that tribalism no longer dictates outcomes in city elections.” (If you want reason to be skeptical, though, read Nate Cohn on the particular difficulties of polling in NYC.)

Quinn would be the city’s first female and first gay mayor, but she’s never caught on as a transformative candidate, maybe because she’s worked too well with the political establishment. This scenario is familiar to someone from Massachusetts, where we had two decades of women who ran for governor or U.S. senator after rising through party ranks and demonstrating an ability to work well with the old-boy network. They all lost (Martha Coakley being the most famous example), leading to snarky comments about how supposedly liberal Massachusetts was more sexist than Louisiana or South Carolina. Then Elizabeth Warren, who had never run for anything before, unseated U.S. Senator Scott Brown.

Women, it seems, do well as outsider candidates, and Quinn may be too closely associated with outgoing Mayor Michael Bloomberg, whose policies she frequently championed in the City Council.

If the polls are correct and any Democratic nominee will win in November, we’re looking at the end of 20 years of Republican rule in the nation’s biggest city. (Yes, Rudy Giuliani was a comparatively liberal Republican and Bloomberg probably would have run as a Democrat if he thought he could win the primary, but that’s how a political party gets to be competitive everywhere.) For a while during those 20 years, it looked like the GOP could be a serious player in running big cities. Los Angeles had a Republican mayor, Richard Riordan, from 1993 to 2001, and Philadelphia came within 0.4 points of electing a Republican (Sam Katz) in 1999.

Now the Democrats seem to be securing a monopoly in large cities. (Indianapolis, at 13th, seems to be the biggest run by a Republican.) This is not surprising, given how poorly GOP presidential candidates do in urban areas. For example, Bill Clinton was reelected president in 1996 with 49 percent of the national vote, and Barack Obama got 51 percent in winning a second term last year. In New York City, Clinton’s 77 percent rose to 82 percent for Obama.

The Lost Opportunity of Urban Conservatism

But there does seem to be a lost opportunity here. At points, Bloomberg and predecessor Giuliani epitomized the fiscal conservative/social liberal image that showed some success in the Northeast (think of Massachusetts Gov. Bill Weld and New Jersey Gov. Christine Whitman). It’s easy to imagine a kind of urban conservatism that would promote housing development and help small-scale entrepreneurs by easing up on zoning and licensing regulations—a counterforce to NIMBYism.

Bloomberg certainly has a pro-development reputation, but he’s now hugely unpopular with both civil-liberties and civil-rights advocates because of his police department’s aggressive “stop and frisk” policies. And libertarians have never forgiven him for trying to limit the size of soft drinks sold in the city; Reason, the most widely read magazine associated with the movement, has been obsessive on the issue. Then there’s his success at changing the term-limits law to win a third go-round in City Hall. Quinn supported this change, and now it’s the biggest weight around her neck.

Had Bloomberg stopped at two terms, there might be more support to continue his policies. Instead, New York magazine’s Choire Sicha argues that Bloomberg’s third term was “when we entrenched a permanent underclass in the city,” which is hyperbolic in its specificity but may become a dominant theme in the general election. “Every day is choose-your-own-adventure when you’re not dying over the rent,” Sicha writes, in a piece with the subhead “If New York is better than ever—and it is! It is!—why does it kind of suck?”

De Blasio, with his talk of “two cities” and attacks on widening economic inequality, would be a fascinating change of direction after 20 years. His proposal for an income surtax on city residents making more than $500,000 would have been politically suicidal when New York and other older cities were terrified at the thought of wealthy residents moving out. But big-city America is enjoying a comeback, led by places like New York, Washington, and Boston. With some exceptions (like Detroit), they are growing and getting more prosperous. As a result, the movement toward smaller, more austere city government—based on the idea that the economic pie is shrinking—may be losing its appeal.

Economist Ed Glaeser, in a summary of mayoral politics in our largest city over the past century, warns, “New York may now hunger for social justice, but unless liberal activism is tempered with managerial competence and an appreciation of urban limits, we risk a repeat of the terrible path that many cities, including New York, traveled during the 1960s and 1970s.”

But it’s unclear what an appreciation of “urban limits” means in 2013. No matter who is elected mayor, it doesn’t seem likely that New York will go back to machine-politics patronage, or unrealistically generous concessions to public unions. Would increasing taxes on the wealthiest, or spending more on schools and public health, inevitably lead to that “terrible path”?

Matt Yglesias is more optimistic in his Moneybox column, praising de Blasio’s support for high-rise development (as reported in the Wall Street Journal). Yglesias writes, “If there's a tension between a pro-development stance and progressive politics, then I’d say so much the worse for progressive politics. What I can say for sure is that there’s no tension between a pro-development stance and [the de Blasio] campaign’s focus on inequality.”

Whether New York’s next mayor can focus on both goals—as opposed to quietly dropping one or the other—is the big question of the next four years.

Photo of Bill de Blasio from his campaign site.